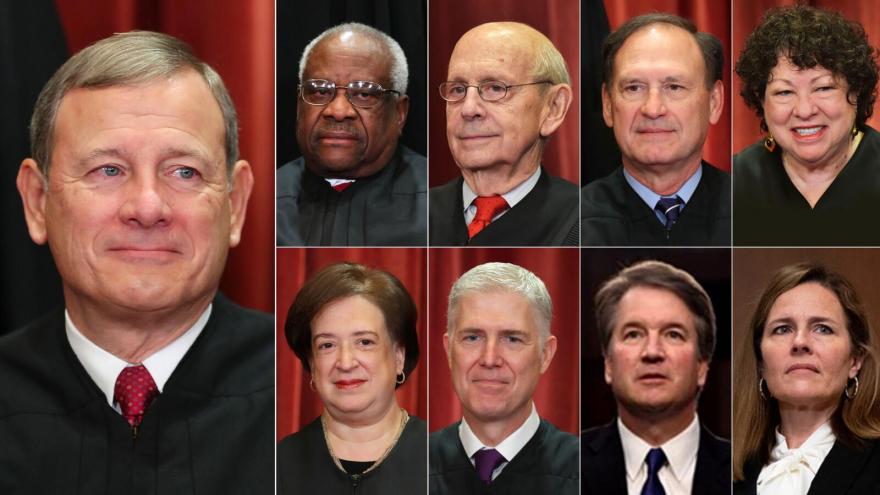 The Supreme Court appeared poised to again reject a Republican-backed attempt to kill the Affordable Care Act, based on the justices' tone during two hours of oral arguments Tuesday.

(CNN) -- The Supreme Court appeared poised to again reject a Republican-backed attempt to kill the Affordable Care Act, based on the justices' tone during two hours of oral arguments Tuesday.

It would represent a final failure of President Donald Trump's push to end Obamacare.

How has the Affordable Care Act affected you? Share your story

As always, oral arguments aren't necessarily an indication of how justices will rule. Some observers came out of the 2012 challenge to Obamacare wrongly convinced the court would strike down the law months before that year's presidential election.

But there's no resisting reading the tea leaves. Here's what we learned:

Simply put, Chief Justice John Roberts saved Obamacare in 2012, famously (or infamously, depending on your point of view) calling the mandate to buy health insurance a tax. Trump and the GOP-controlled Congress zeroed out that penalty three years ago, giving Republicans -- including the Trump administration -- an opening to come back to court. If the tax is gone, they say, the logic for keeping the law is gone.

The biggest question is whether the court, should it agree with that logic, would kill the entire law or simply sever the mandate section.

You don't always get statements as direct as this one from Justice Brett Kavanaugh, Trump's second appointee to the bench: "I tend to agree with you on this very straightforward case for severability under our precedents, meaning that we would excise the mandate and leave the rest of the act in place reading our severability precedents," Kavanaugh told Don Verrilli, the attorney for the Democratic-led US House of Representatives, which is defending the law because the Trump administration won't.

That would be the ballgame.

"Even if there are five votes to strike down a zero-penalty individual mandate, Kavanaugh has made clear he thinks that provision can be severed from the rest of the ACA (and we already know the chief feels that way)," said Steve Vladeck, a CNN legal analyst and University of Texas Law professor. "There is therefore no way to count to five votes to throw out the entire statute."

Republicans may not have a leg to stand on

Even before we get to the question of whether the individual mandate is constitutional -- or if the law can be broken up or has to be axed in its entirety -- there's the issue of whether we should even be here at this point.

A majority of justices could take an off-ramp and determine that Texas and the other GOP-led states that brought the challenge don't have standing to sue in the first place.

Roberts started his questioning with the standing issue, followed by Justices Clarence Thomas and Kavanaugh.

"I assume that in most places there is no penalty for wearing a face mask, or a mask, during Covid but there is some degree of opprobrium if one does not wear it in certain settings," Thomas asked California Solicitor General Michael Mongan. "What if someone violates that command, let's say it's in similar terms to the mandate here but no penalty, would they have standing to challenge the mandate to wear a mask?"

Roberts appeared worried about opening the floodgates to all kinds of unintended challenges.

"You're letting somebody not injured by the provision that he's challenging sort of roam around through those thousand pages and pick out whichever ones he wants to attack," the chief justice said.

Roberts is so over this

The chief justice is a conservative who's cut the heart of the Voting Rights Act, voted to expand the reach of the Second Amendment and worked to expand executive authority. But his decision to uphold Obamacare in 2012 means he'll never be fully embraced by Republicans.

Tuesday, he seemed agitated that his court had to take up the issue once again. Two lower courts had said the individual mandate had to go but were mixed on whether it could be severed from the rest of the law.

Roberts doesn't tweet, but his tone would be characterized as a clear subtweet of Republicans and Trump, a President who has repeatedly criticized the chief justice.

"I think it's hard for you to argue that Congress intended the entire act to fall if the mandate was struck down when the same Congress that lowered the penalty to zero did not even try to repeal the rest of the act," Roberts told Texas Solicitor General Kyle Hawkins.

"I think, frankly, that they wanted the court to do that, but that's not our job."

Amy Coney Barrett in the spotlight

During her confirmation hearings last month, Senate Democrats railed against Amy Coney Barrett, saying Trump wanted to put her on the court to help ensure that Obamacare was struck down.

She had written a scathing law review article picking apart Roberts' 2012 ruling, and hadn't elaborated on it during her hearings, citing ongoing litigation.

Tuesday was the first time we've heard from her on the bench about the subject -- and she was skeptical of Texas' standing to sue as well but also hinted at some of her thoughts on Roberts.

"Petitioners have pointed out that if, in fact, Congress zeroed this out and -- and made it no longer a tax, they've argued that Congress would have deliberately done something unconstitutional by grounding this language, if, in fact, it has force, assume that, in its commerce power," Barrett said at one point.

The fun addition: "And I -- I'm asking because, you know, there were five justices who thought that, but it wasn't a majority opinion who said it."

Sadly, because the court is currently hearing oral arguments by telephone, we couldn't see the chief justice's reaction.

The plane didn't crash, so what's the issue?

When the law was enacted in 2010, the individual mandate was seen as crucial to bringing healthy people into the individual marketplace to offset the higher costs of sicker enrollees. It was the "stick" that would push people to enroll, alongside the "carrots" of premium subsidies that would make coverage more affordable.

From the beginning, however, some health care experts questioned whether the penalty was high enough to compel many consumers to buy insurance. The mandate's effectiveness remains a matter of debate.

A 2017 Congressional Budget Office report, which was frequently cited during the oral arguments, estimated that the number of people with health insurance would decrease by 4 million in 2019 and 13 million in 2027. The individual market would remain stable in almost all parts of the country in the coming decade.

CBO also projected that only a small number of people who enroll in insurance because of the mandate, which was reduced to $0 starting in 2019, would continue to do so only because they wanted to comply with the law.

However, enrollment in Obamacare plans has remained fairly stable. More than 11.4 million people signed up for coverage on the Affordable Care Act exchanges in 2019 and 2020, compared with just under 11.8 million in 2018, the last year the mandate was in effect.

In his questioning, Justice Samuel Alito alluded to the fact that the individual market has held up despite Congress' setting the penalty to $0.

"At the time of the first case, there was strong reason to believe that the individual mandate was like a part in an airplane that was essential to keep the plane flying, so that if that part was taken out the plane would crash," he asked of Jeffrey Wall, the acting solicitor general.

"But now the part has been taken out and the plane has not crashed," Alito added. "So if we were to decide this case the way you advocate, how would we explain why the individual mandate in its present form is essential to the operation of the act?"