5 people will share a $50,000 reward for tips that led to Brooklyn subway shooting suspect's arrest 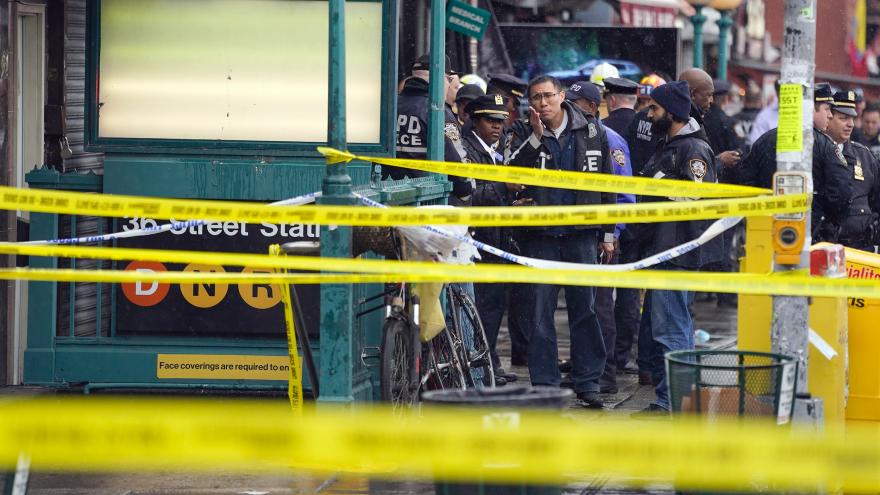 (CNN) -- Five people will share a combined $50,000 reward for providing "critical information" that helped lead to the arrest of the Brooklyn subway shooting suspect, the NYPD announced Friday.

The man authorities say was the shooter, Frank James, 62, was denied bail in court Thursday and did not enter a plea on charges of violating a law that prohibits terrorism and violent attacks on mass transportation. He was arrested a day earlier in Manhattan's East Village after calling in a tip to police; hours earlier, a teenager had called Crime Stoppers to report seeing him.

The information provided by the five individuals "contributed directly" to James' arrest, police said, but did not offer more details.

"The public is who we serve, but they are also often our best partner," NYPD Police Commissioner Keechant Sewell said in a statement. "We appreciate all of those who responded to our call for information to locate this suspect, including all of those whose tips did not pan out."

Twenty-nine people were sent to hospitals, including the 10 who were shot and 19 others who suffered injuries mostly related to smoke inhalation, falling down or having a panic attack, officials said. Four people remained hospitalized Thursday and were in stable condition, according to hospital representatives.

While officials have not released a motive for one of the most violent attacks to occur on the city's subway system, they have pointed to YouTube videos in which James shares his views on violence, mass shootings and mental health.

James, who is Black, says in the videos that he suffered from post-traumatic stress and supported hatred of African Americans and other people he believed had maligned him. In a video posted in February, he criticizes a plan by New York Mayor Eric Adams' administration to address safety and homelessness in the subway, saying it was "doomed to fail."

On Friday, the mayor said officials are using the shooting as a "case study" to see what can be done differently for mental health programs.

"We're looking at people who are stating that they're dealing with mental health issues right now, and so we have to get it right," Adams said at a news conference. "This is generational, in the making, a broken system, but we need help also on a state level and on a federal level."

City officials want to enhance security in the subway system, the mayor told CNN earlier this week, noting the process would entail examining technology that could detect whether somebody is carrying a gun.

"But it is extremely challenging to identify every person that enters the subway system because of the vastness of our system," he said.

On the day of the shooting, more than 3 million people rode the system, which also includes passengers who used the Staten Island Railway, according to the Metropolitan Transportation Authority (MTA).

On Friday, city officials honored five MTA workers for helping evacuate people calmly from the train and the Brooklyn station where the train stopped after the attack.

The workers each were given a framed proclamation at City Hall, declaring Friday to be their day in New York City. They included David Artis and Raven Haynes, the operator and the conductor, respectively, of the N train where the attack happened.

They also included Joseph Franchi and Dayron Williams, who operated and conducted an R train that took people away from the station; as well as bus operator Parla Mejia, who did the same.

Adams, isolating because he'd tested positive days ago for Covid-19, addressed the honorees through a live video feed.

"You stayed calm, stayed focused, and you saved lives," Adams said. "Thanks to you, no passenger was left behind; no lives were lost."

Prosecutors also argued James was a flight risk and a danger to the community, according to a letter submitted by US Attorney Breon Peace to a federal judge.

"The defendant committed a premediated mass shooting on the New York City subway system and then fled the scene, with a stockpile of ammunition and other dangerous items stowed in his storage unit," the letter says.

Defense attorney Mia Eisner-Grynberg cautioned against a rush to judgment.

"We are all still learning about what happened on that train," she said outside the courthouse. "What we do know is this: Yesterday, Mr. James saw his photograph on the news. He called Crime Stoppers to help. He told them where he was. Initial press and police reports in cases like this one are often inaccurate. Mr. James is entitled to a fair trial, and we will ensure that he receives one."

The suspected shooter was wearing a yellow hard hat, an orange reflective jacket and a surgical mask as he set off at least one smoke device and began shooting at people with a Glock pistol, according to a criminal complaint. Witnesses saw the suspect wearing a gas mask, the complaint stated.

Passengers tried to escape the smoke engulfing the train by running to one end of the car.

The doors wouldn't open until two minutes later, when the train reached the 36th Street station, and passengers fled the train as the smoke followed them, video shows.

Other victims with bloody wounds fell to the platform as they shouted for medical care. Blood streaked the subway platform, with people sitting and lying on the platform, photos taken at the scene show.

The evidence connecting the suspect to the shooting

James was initially named a person of interest after authorities determined he rented a U-Haul van whose keys were found at the scene. Investigators declared him a suspect Wednesday morning after they learned he bought a gun that was left at the scene.

Authorities found a bag containing the Glock handgun, a plastic container with gasoline, a torch, the U-Haul key and multiple bank cards, as well as another bag containing fireworks, the complaint states.

James bought the gun in Ohio in 2011, the bank cards had James' name on them and the U-Haul key was connected to a van James had rented in Philadelphia, according to the complaint.

A neon construction jacket left on the subway platform had a receipt for a storage unit in Philadelphia registered to James, the complaint states.

Federal prosecutors believe he went to the storage facility filled with ammunition and weapons the evening before the attack, according to court documents. A search of the unit revealed additional ammunition and "a threaded 9mm pistol barrel that allows for a silencer or suppressor to be attached."

Hours before James was arrested, Jack Griffin, 17, said he was on a field trip with his high school photography class when he spotted the suspect sitting on a bench on Manhattan's Lower East Side.

Griffin submitted the tip to NYPD's Crime Stoppers around 10:30 a.m. And although James wasn't captured for several more hours, the NYPD later told him the tip helped narrow their net of his whereabouts, he said.

"It's crazy," he said. "I was looking for things to shoot (with a camera), and I found probably one of the most wanted people."