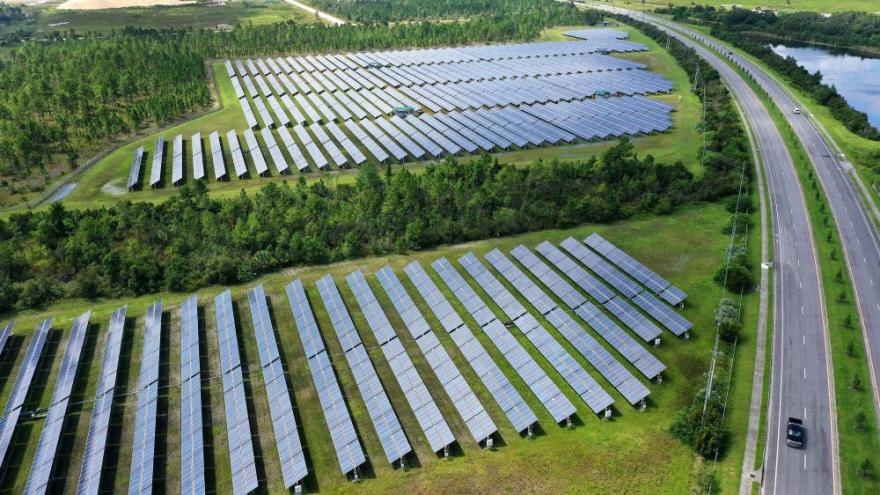 As climate change fuels more extreme weather events, and environmental disasters like last weekend's oil spill threaten wildlife and human health, more people are banking on clean, carbon-free energy to speed the world's transition away from fossil fuels and usher in a net-zero future. The Stanton Solar Farm outside of Orlando, Florida, shown here produces six megawatts of electricity, or enough to power about 1,200 homes, according to Duke Energy.

Ending the planet's reliance on fossil fuels is critical to curbing the climate crisis, but Vijay Modi, a professor of mechanical engineering at Columbia University, said there are still hurdles to overcome before we can fully transition to renewables: energy storage, public acceptance of transmission lines and adoption of electric vehicles and alternative home heating.

"Once the population begins to understand that it is possible to (live) without fossil fuels, it will be easier because then they will demand the local constituencies or local bodies to push for cleaner sources," Modi told CNN. "I personally think that with the low cost of solar and wind, ample land area in the US and some appropriate government policies, this transition can come fast."

CNN spoke with energy transition experts about the most reliable energy sources -- and their challenges -- to replace coal, oil and gas and halt the climate crisis.

Humans have used solar energy since around the 7th century BC, when they used sunlight and glass to ignite fires. But the modern solar cell wasn't invented until the mid-1900s. Unlike fossil fuels, solar energy systems do not emit greenhouse gas or air pollution, which makes solar power one of the best potential solutions to the climate crisis.

Modi said the US could see solar dominate the electricity grid as early as 10 years from now.

In September, a report by the US Department of Energy outlined a path that would exponentially increase the use of solar energy in the country, with the sun powering nearly half of the US electricity. To achieve 40% solar electricity by 2035, the DOE says the US would need to install 30 gigawatts of new solar capacity every year for the next four years -- enough to power around 3 million homes, depending on their location -- and double that number again each year until 2030.

According to K. Max Zhang, an engineer and faculty director at Cornell University's Atkinson Center for Sustainability, the US has more than enough land to support the deployment of solar, which would also create jobs.

Similar to solar energy, wind energy could also ramp up in the next 10 years, said Modi. According to the US Energy Information Administration, wind electricity generation in the US has grown significantly in the last three decades, from about 6 billion kilowatt-hours per year in 2000 to roughly 338 billion in 2020.

Wind energy is generated with turbines. Wind propels the blades of the turbines, which are linked to a drive shaft that turns an electric generator, which produces electricity.

Much like solar, Modi and Zhang said the US has enough land to build wind farms. And there's a vast area with high wind-power potential offshore.

"If you look all the way from Maine, to New Hampshire, Massachusetts, Connecticut, New York, New Jersey, we have a really amazing offshore wind resource, which is a very high-quality resource in this part of the country," Modi said.

Geothermal energy takes advantage of underground warmth. It's a renewable energy source that is continuously produced. Today, people use geothermal heat for bathing, heating buildings during the winter, and to generate electricity.

Iceland has been a pioneer in the use of geothermal energy, because of its abundant source of hot, easily accessible underground water that can be converted to energy. In the US, Modi said the challenge is finding the exact locations of where these geothermal hot spots are and how close the magma or high temperatures are to the surface.

"The question we are all trying to answer is if we can go use the same kind of drilling techniques that the oil and gas industry use to go a little bit deeper," he said. "Then we can exploit that deeper source. If we could pull that off, the advantage is we could get year-round, continuous heat from it. From that heat, we could create a distribution of hot water pipes."

But there are risks. Extracting geothermal energy, according to research, has been linked to causing earthquakes -- an area that geophysicists are currently finding solutions for.

According to a recent report by the International Energy Agency, the current geothermal contribution to US energy capacity is less than 1%, but the potential is more than 8% by 2050.

As public opinion has evolved on the climate crisis, so have views on transitioning to clean energy. The use of nuclear energy, in particular, has been contentious in the United States.

"The distinction between 100% renewable and 100% clean is seen in nuclear," Zhang said. "Nuclear is nonrenewable, but it's in the mix of what is clean electricity."

Many Republicans favor nuclear energy above all other non-fossil fuel energy sources, while some Democratic lawmakers like Senators Bernie Sanders and Elizabeth Warren have called to phase out nuclear.

"We're not going to build any nuclear power plants and we're going to start weaning ourselves off nuclear energy and replacing it with renewable fuels," Warren said during CNN's climate crisis presidential town hall in 2019.

Despite its capacity to replace fossil fuels, many worry about the well-known problems associated with nuclear energy generation, including radioactive waste, which is harmful to the environment and communities if it's not disposed of properly.

The problem with hydropower

While experts project usage in hydroelectricity to continue, Modi said he doesn't see growth in hydroelectric in the near future, because we've already taken advantage of the best hydropower locations.

"We have already exploited good sources of hydroelectric power in the US," he said.

In addition, the climate crisis is fueling drought that is draining reservoirs in the West and triggering water shortages. In California, a major hydroelectric power plant was forced to shut down this summer due to low water levels, for the first time since it opened in 1967.