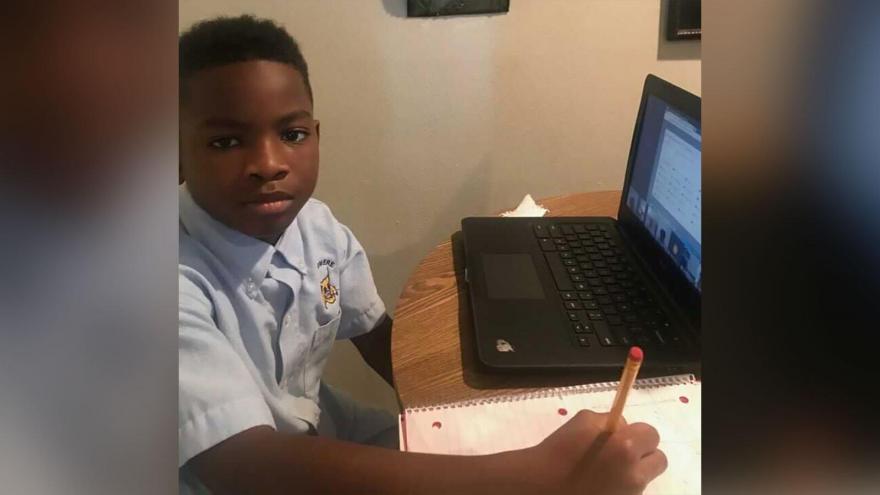 (CNN) -- A 9-year-old Louisiana student was suspended after a teacher reported seeing a gun in the boy's bedroom during a virtual class.

The attorney representing the child's family said it was a BB gun and the school went too far -- applying its on-campus weapons policy without considering the privacy of the child and his family.

"I am alarmed by what appears to not only be multiple violations of both the State and Federal Constitutions, but also blatant government overreach by the school system," Landry said in a statement.

"For anyone to conclude that a student's home is now school property because of connectivity through video conferencing is absurd ... It is ludicrous for this All-American kid to be punished for taking responsible actions just as it is for his parents to be accused of neglect," Landry added.

How the incident happened

Ka'Mauri Harrison, a fourth grader at Woodmere Elementary School in Jefferson Parish, was taking a test in his bedroom on September 11 after being sick and not participating in online school the day before, family attorney Chelsea Cusimano told CNN on Friday.

She said Ka'Mauri had muted the volume on his computer so he could concentrate and had muted himself since it's required when students are not speaking.

One of his siblings, who shares his room, stepped, or tripped on a BB gun that Ka'Mauri had received as a gift. Ka'Mauri picked up the gun and was out of sight from the screen for a moment. He then placed the BB gun next to him in his chair, Cusimano said.

Ka'Mauri noticed his teacher was trying to get his attention in the virtual classroom.

According to school documents Cusimano shared with CNN, as the teacher called Ka'Mauri's name, "the student was disconnected from the screen due to internet issues."

The school tried to reach the parents unsuccessfully and then called Ka'Mauri's grandfather, the emergency contact, telling him the child had a gun during a virtual class, according to school documents.

School documents show the school recommended Ka'Mauri's expulsion for "possession of a starter gun, stun gun and/or facsimile" according to Jefferson Parish Public School Policy and Procedures. At a hearing held September 22, it was determined Ka'Mauri was guilty of displaying a facsimile weapon while receiving virtual education. Cusimano, who told CNN she participated in the hearing, said a hearing officer determined it was a BB gun.

The school amended the recommendation for expulsion to school suspension for six days and social work assessment. Ka'Mauri returned to online school on Thursday, September 24. He had been out of school since the day of the incident, according to Cusimano.

Cusimano told CNN that Jefferson Parish Schools "took an on-campus weapons policy and unilaterally determined that they were going to apply it to one of their students in a manner as if he was on campus and not consider any measures such as the privacy of his own home."

In a statement to CNN, Jefferson Parrish Schools told CNN, "We do not comment on individual student records. Regarding discipline, it is our policy that teachers and administrators may employ reasonable disciplinary and corrective measures to maintain order."

Cusimano argues there is a gap in the way schools enact policies in a virtual learning environment, which should consider the things that take place in a private home.

Clarification: The name of the student in this story was updated to include an apostrophe.