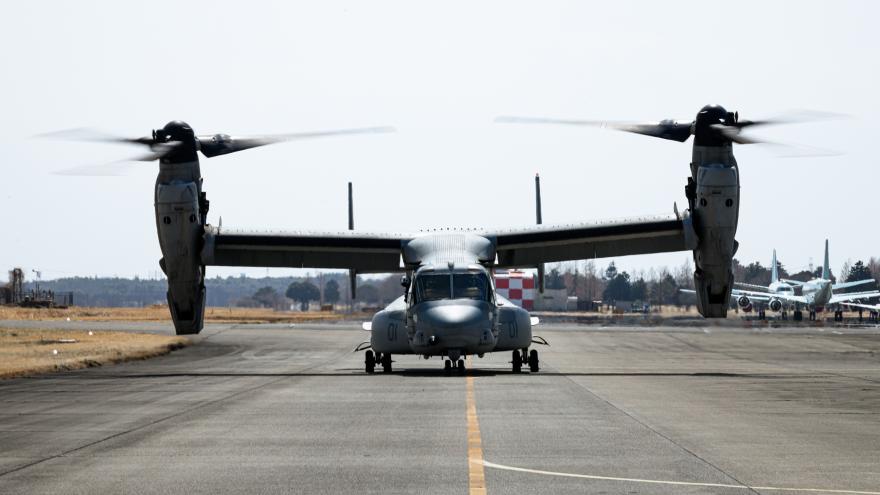 (CNN) -- Four US service members were killed when the aircraft they were traveling in crashed during NATO training exercises in Norway, the country's Prime Minister said Saturday.

"It is with great sadness we have received the message that four American soldiers died in a plane crash last night," Jonas Gahr Støre said on his official Twitter account.

"The soldiers participated in the NATO exercise Cold Response. Our deepest sympathies go to the soldiers' families, relatives and fellow soldiers in their unit," he added.

The MV-22B Osprey aircraft, assigned to the II Marine Expeditionary Force (MEF) US military unit, was "on a training mission in Nordland County, northern Norway on Friday" with a crew of four, the Norwegian Armed Forces said.

The aircraft was spotted from a rescue helicopter, and appeared to have crashed in the municipality of Beiarn, Nordland Police chief of staff, Bent Arne Eilertsen, told public broadcaster NRK on Saturday. The craft appeared to have "major damage," Eilertsen said.

"What we have been told is that it is an American plane with Americans on board," Eilertsen added.

The U.S. Marine Corps said four Marines were involved in an accident involving an MV-22B Osprey during a training mission in Norway on Friday but did not elaborate further on their status, or their identities pending notification to their families.

"Though the nature of military service is inherently dangerous, the safety of our Marines, Sailors, Allies and partners is our top priority. Our hearts go out to the families affected by these events. The incident is currently under investigation by both Norwegian and U.S. organizations," the Marine Corps said in a statement.

"Norwegian civil authorities took the lead in search and rescue efforts, and we are grateful for their professional commitment to our enduring relationship. We are immensely grateful for the support of all first responders, the Norwegian Armed Forces, and Allies and partners that contributed various assets and people in the ongoing efforts," the statement also said.

Earlier the Marine Corps said the aircraft was participating in Exercise Cold Response 2022. According to NATO's website, Cold Response 2022 is a long-planned exercise bringing together NATO allies and their partners which aims to test their ability to work together in cold weather conditions.

"This year's exercise was announced over eight months ago," the NATO site said. "It is not linked to Russia's unprovoked and unjustified invasion of Ukraine, which NATO is responding to with preventive, proportionate and non-escalatory measures."

Bad weather means search crews need to access the site by land, with rescuers using snowmobiles to reach the scene, according to Eilertsen.

The aircraft was reported missing at 6:26 p.m. local time Friday while heading toward the town of Bodø, located north of the Arctic Circle, the Norwegian Joint Rescue Coordination Center (JRCC) said in a statement.

The aircraft's last known position was by Saltfjellet, a mountainous area of Nordland county, the statement added.

The Norwegian Safety Investigation Authority and The National Criminal Investigation Service will arrive in Bodø on Saturday and start their investigation at the town's airport.

Due to the poor weather, they will most likely make their way to the crash site on Sunday, according to NRK.