4 takeaways from the US intelligence community's UFO report 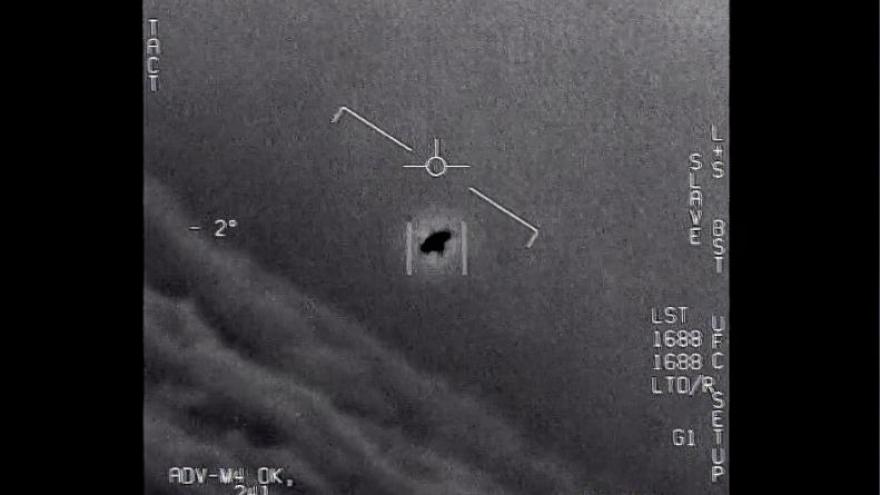 The image from video provided by the Department of Defense labelled Gimbal, from 2015, an unexplained object is seen at center as it is tracked as it soars high along the clouds, traveling against the wind.

(CNN) -- The US intelligence community on Friday released a hotly anticipated report on what it knows about a series of mysterious sightings of unidentified flying objects by Navy pilots and others.

The report, which examined 144 reports of what the government terms "unexplained aerial phenomena" between 2004 and 2021, is among the first acknowledgments by the US government that it is looking into UFOs as a serious national security concern.

"UAP clearly pose a safety of flight issue and may pose a challenge to U.S. national security," the report states.

Here are the top four takeaways from the report:

No evidence of aliens — but what are they?

Investigators found no evidence that the sightings represented extraterrestrial life, a senior US official told reporters on Friday, although they didn't rule out the possibility.

"Of the 144 reports we are dealing with here, we have no clear indications that there is any non-terrestrial explanation for them — but we will go wherever the data takes us," the official said.

Even if they are not visiting life from another world, that doesn't mean investigators know what these strange sightings are. Of the 144 reports covered by the study, officials were able to explain only one of them.

Investigators were convinced that the majority of the sightings were indeed "physical objects," the official told reporters on Friday.

"Most of the UAP reported probably do represent physical objects given that a majority of UAP were registered across multiple sensors, to include radar, infrared, electro-optical, weapon seekers, and visual observation," the report found. In 11 cases, pilots reported "near-miss" collisions with these strange objects.

No evidence of foreign government involvement, either.

For lawmakers, intelligence and military personnel working on the issue, the bigger and more likely concern was not that alien life is visiting Earth but rather that a foreign adversary like Russia or China might have developed some kind of next-generation technology that the United States doesn't know about.

At least for now, there's no evidence that the strange sightings are foreign surveillance or new technology, the report found.

Still, it's possible that some of the 143 unexplained cases might wind up being foreign technology. That's one of the reasons the report doesn't include more examples of sightings that haven't previously been made public.

"They're very sensitive to, if this is an adversary, you want to be really careful about saying, 'We know this and we don't know that,' " said Rep. Jim Himes, a Connecticut Democrat on the House Intelligence Committee who received a briefing on the matter from Navy and FBI officials last week.

Why don't they know more?

"The limited amount of high-quality reporting on unidentified aerial phenomena hampers our ability to draw firm conclusions about the nature or intent of UAP," the report found.

Officials don't believe any two of these 144 sightings are necessarily the same thing. For the report, investigators tried to sort the incidents into five categories: airborne clutter, like birds or weather balloons; natural atmospheric phenomena; US government or industry developmental programs; foreign adversary systems; and an alluring catchall -- "Other."

But in 143 cases, analysts simply lacked the technical information they needed to be able to come to firm conclusions. Some reports of sightings included no sensor data at all for engineers to examine but rather were solely verbal recollections by pilots.

Reporting was also hampered by the cultural "stigma" associated with UFOs, investigators found.

"Narratives from aviators in the operational community and analysts from the military and IC describe disparagement associated with observing UAP, reporting it, or attempting to discuss it with colleagues," the report said.

Part of what the Pentagon and the intelligence community intend to do next is develop a standardized reporting system for sightings.

They also plan to begin collecting data in places where pilots are not flying to see if there is a baseline level of activity that they can record. Right now, the senior US official said, there is a "reporting bias" in the database of sightings they have, because most of the reports they have are from Navy pilots.

UFO-ologists (and some lawmakers) disappointed

Some congressional sources who have seen the classified version of the report have already expressed disappointment there's not more of an explanation for the episodes, saying the report raises more questions than it answers.

Many lawmakers said the report signaled a need for further study on UFOs.

"This report is an important first step in cataloging these incidents, but it is just a first step," Sen. Marco Rubio of Florida, the top Republican on the Senate Intelligence Committee, said in a statement on Friday. "The Defense Department and Intelligence Community have a lot of work to do before we can actually understand whether these aerial threats present a serious national security concern."

The report is almost certain to disappoint UFO-ologists who had hoped it might offer definitive proof that the US government has made contact with extraterrestrial life -- what is known in those communities as "the Disclosure."

But the report does signal an extraordinary shift in attitudes within the national security community about what had long been considered a fringe issue, after years of Washington infighting.

Erasing the stigma surrounding a serious discussion of UFOs was also the goal for lawmakers in 2020 when they passed legislation requiring the Pentagon and intelligence community to produce this report.

That goal, at least, appears to be within sight, some lawmakers say.

"The fact that they are taking this sort of seriously for the first time I think is important," Quigley added.