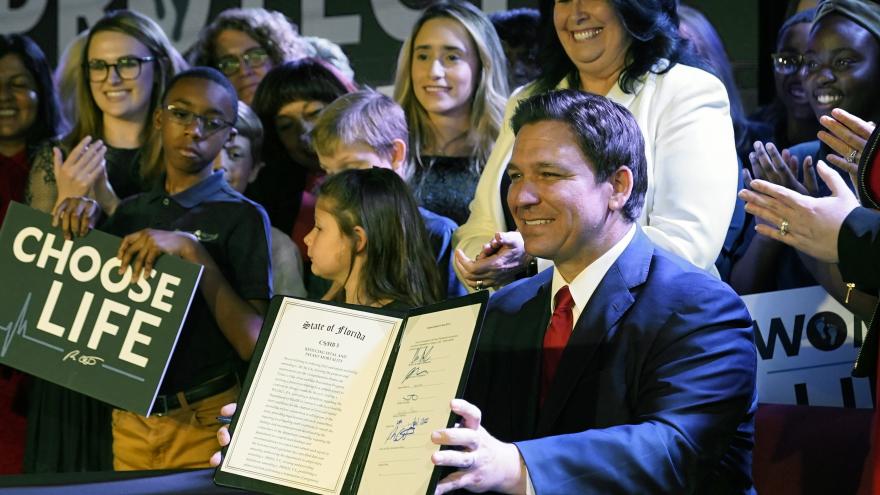 (CNN) -- Four states moved to curtail abortion access this week, with two of them advancing their own versions of a ban on abortions after 15 weeks of pregnancy -- similar to the controversial Mississippi law before the US Supreme Court that's set up a direct challenge to Roe v. Wade.

The only two clinics in Kentucky in which abortions are performed, Planned Parenthood and EMW Women's Surgical Center, are separately suing to block a new state abortion law, saying it amounts to a de facto ban on abortions in Kentucky. The law bans most abortions after 15 weeks of pregnancy, restricts access to medication abortion and enforces more requirements for minors to obtain abortions in the state.

The plaintiffs argue they can't comply with the new law, claiming Kentucky hasn't yet set up a system to meet its reporting requirements.

"It is arbitrary and unconstitutional to enforce penalties for noncompliance while failing to provide a means of immediate compliance. Plaintiff, in fairness, must be granted time to comply with these sweeping changes to the provision of abortion care," said the American Civil Liberties Union and the ACLU of Kentucky, on behalf of the EMW Women's Surgical Center, in its lawsuit, adding that patients will now be unable to obtain abortions in Kentucky or forced to seek them out of the state, unless the court intervenes.

The measure went into effect this week after Kentucky's Republican-controlled legislature on Wednesday overrode Democratic Gov. Andy Beshear's veto of the bill.

The governor had said the bill was "likely unconstitutional," noting its lack of exceptions for pregnancies caused by rape and incest and arguing it would cost the state an estimated near $1 million to enforce.

Florida Republican Gov. Ron DeSantis signed a measure into law on Thursday that bans abortion after 15 weeks of pregnancy without exemptions for rape, incest or human trafficking.

The bill allows exemptions in cases where pregnancy poses "serious" health risks or fatal fetal abnormalities are detected if two physicians confirm the diagnoses in writing.

It goes into effect on July 1.

Oklahoma GOP Gov. Kevin Stitt on Tuesday signed a bill into law that makes performing an abortion illegal in the state, with an exception only in the case of a medical emergency.

The law will take effect this summer, barring any legal challenge.

Senate Bill 612, which cleared the state Senate last year and the House earlier this month, makes performing an abortion or attempting to perform one a felony punishable by a maximum fine of $100,000 or a maximum of 10 years in state prison, or both.

The Tennessee Republican-led House passed a bill on Thursday that would allow only physicians to provide drugs used in medication abortions and bar the drugs from being sent via mail.

The legislation, House Bill 2416, would establish criminal penalties and civil liability for offenders that would not apply to the patient who was provided the abortion drugs.

It would also require physicians to examine patients in person before providing the abortion drugs and to schedule follow-up visits for the patients.

The bill passed the House by 68-20 on Thursday. It now heads to the state Senate, where Republican lawmakers also have a majority.