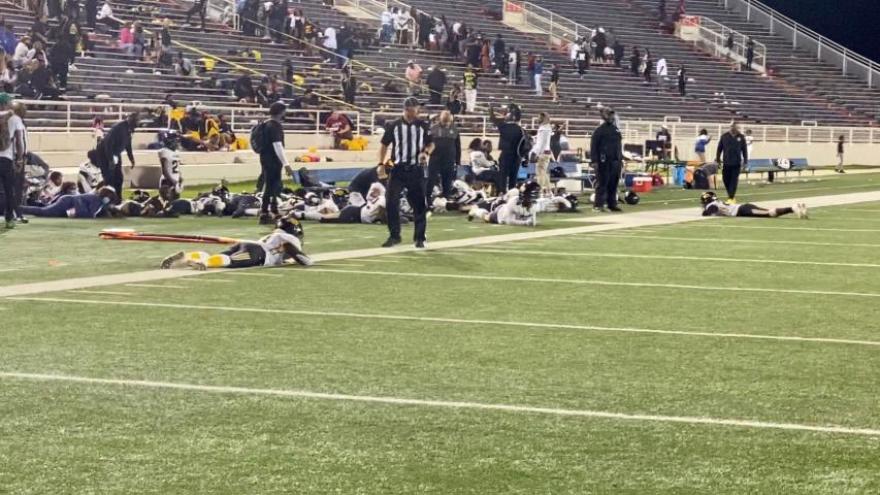 Players lie on the field as they take cover during a football game at Ladd-Peebles Stadium in Mobile, Alabama, on October 15.

(CNN) -- Four people were shot in the exit ramp from a stadium during a high school football game Friday night in Mobile, Alabama, officials said.

Two of the four victims were juveniles, Mobile Police Chief Paul Prine said during a media briefing outside of the Ladd-Peebles Sports and Entertainment Complex.

Police are working to determine the identities of the victims, Prine said.

The football game between Williamson High School and Vigor High School "was stopped and has since ended," Prine said.

He added that no shots were fired inside the stadium.

"The shots were fired on the west ramp," Prine said. "It was not shot in the arena or in the football area where the stands were at, but it was here on the exit ramp coming out of the stadium."

Officers found four shell cases in the area and believe there may have been as many as seven shots fired, according to Prine.

"We have several individuals that maybe involved, but possibly just one shooter," Prine said.

The police chief did not provide a motive for the shooting but said there were possibly two men involved in an altercation around the time of the shooting.

Prine called the shooting an isolated incident, noting he didn't believe there was any threat to the public.

Police received information that at least two people got into a white sedan and fled the scene following that shooting. Officers were working to locate them.

At the time of the news briefing, no arrests had been made, Prine said.