4 Muslims were gunned down in Albuquerque; now some families are afraid to go get food 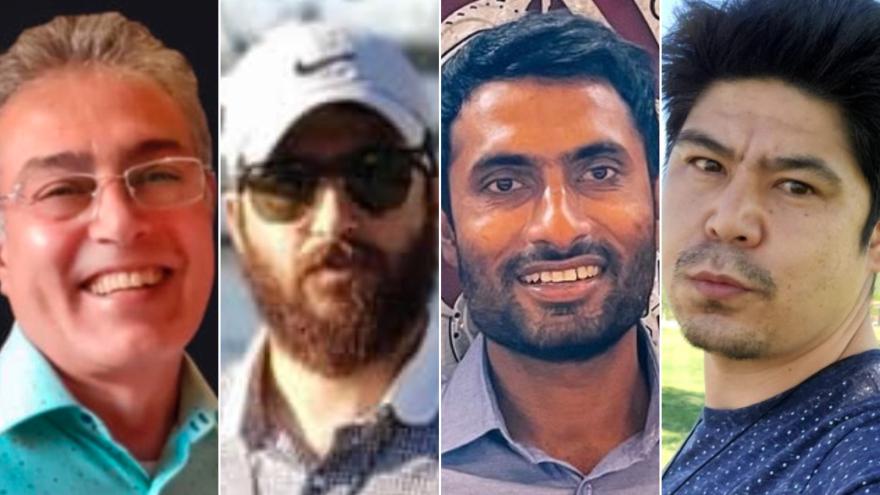 (CNN) -- Everyday life is now permeated by fear after four Muslim men were gunned down in Albuquerque, a mosque leader said.

"It's affecting people from coming over to the mosque to conduct their services, their prayers. So, in every aspect of daily life that we're used to or accustomed to following, it's impacted it in every way possible."

On Friday night, 25-year-old Naeem Hussain was found dead by Albuquerque police. He became the third Muslim man killed in the city within two weeks and the fourth since November.

Hours before his death, Hussain -- who just became a US citizen -- attended a funeral for two of the other shooting victims. The young man expressed concern about the recent shootings, said Tahir Gauba, spokesperson for the Islamic Center of New Mexico.

While no description of his killer was available, Albuquerque police said Hussain's death "may be connected" to the three previous killings of Muslim men from South Asia.

All four victims were Muslim and of South Asian descent, investigators said.

Police are seeking "a vehicle of interest" that might be connected to the four killings. They tweeted a photo of the car, a dark gray or silver Volkswagen with four doors and tinted windows. Police said it might be a Volkswagen Jetta.

Anyone with information about the car or about the killings is asked to call the FBI at 1-800-CALL-FBI or contact Crime Stoppers at 505-843-STOP or CrimeStoppersNM.com.

'They are afraid to go to school'

While police have not called the four killings hate crimes, "in my opinion, clearly it is hate-driven," Albuquerque Mayor Tim Keller said Monday.

"They are obviously targeting Muslim men, and they are happening right here in our own refugee community," Keller told CNN.

Albuquerque is not just "in a place of grieving right now, but also at a place of outrage," Keller said. But the community is determined to help.

"We have marshaled every resource to have now police presence at all our mosques during prayer time," the mayor said. "We are even doing meal deliveries for families that are afraid to leave their house to get food."

Assed, the mosque president, said he's now among the many Muslims in New Mexico grappling with fear every day.

"At the end of the day, we don't have an alternative."

Naeem Hussain migrated as a refugee from Pakistan in 2016 -- fleeing persecution as a Shia Muslim -- and had become a US citizen just last month, according to his brother-in-law, Ehsan Shahalami.

"He was the most generous, kind, giving, patient and down-to-earth person that I could ever meet," said Shahalami. "He was very hardworking. He shared whatever he made with his family back home."

The young man, who opened his own trucking business this year, had plans to bring his wife over from Pakistan and buy some property in Virginia, Shahalami said.

"He had a lot of dreams, and he accomplished some of them," Shahalami said. "His others were cut short by this heinous act."

The day he was killed, Hussain attended a funeral for two other Muslim men who were recently killed in the city, said Tahir Gauba, director of public affairs with the Islamic Center of New Mexico.

Hussain went to a lunch at the mosque after the funerals and approached Gauba to ask if he had more information on the shootings, Gauba told CNN.

"He stopped by to say 'Hey, what's going on?' He was worried. I told him to be careful," Gauba said.

"We thought after burial of these two young men (on Friday), we would have closure and move on and let law enforcement investigate," Gauba said. "Waking up Saturday morning to his death, the whole community just feels helpless. There's a lot of fear. ... It's driving everybody crazy."

Two other Muslim men killed -- Muhammed Afzaal Hussain and Aftab Hussein -- were members of the same mosque. Both were from Pakistan and were killed in southeast Albuquerque just days apart, police said.

After their killings, police began investigating whether the November 7 slaying of Mohammad Ahmadi, a Muslim man from Afghanistan, was connected.

'The fear is so strong'

The Islamic Center of New Mexico is painfully familiar with violence against Muslims in the community.

An arsonist started a fire on the center's property in November, the city of Albuquerque's website said. A month later, police arrested someone on suspicion of arson and negligent arson.

Fortunately, no one was in the mosque at the time of the fire, Assed said.

But now the center, where about 700 to 800 Muslims gather on Fridays, is warning residents to be cautious.

"We urge everyone to take precautions and be aware of your surroundings including making sure that you are not being followed home and avoid walking alone at night," the Islamic Center of New Mexico posted on Facebook. "This is especially true for our members living in the southeast part of the city where these killings have taken place."

The city is also increasing police presence at mosques, Muslim-affiliated schools and the University of New Mexico, officials announced.

"We have heard from the community that the fear is so strong, there is a concern about even things like groceries and getting meals for certain folks in certain areas of town," Keller said in a weekend briefing, adding the city is helping with providing meals for those affected by the killings.

Albuquerque has always felt like a welcoming community for Muslims, even after 9/11, Gauba said. "This is the first time we are feeling this kind of atmosphere," he said. "We are in fear."