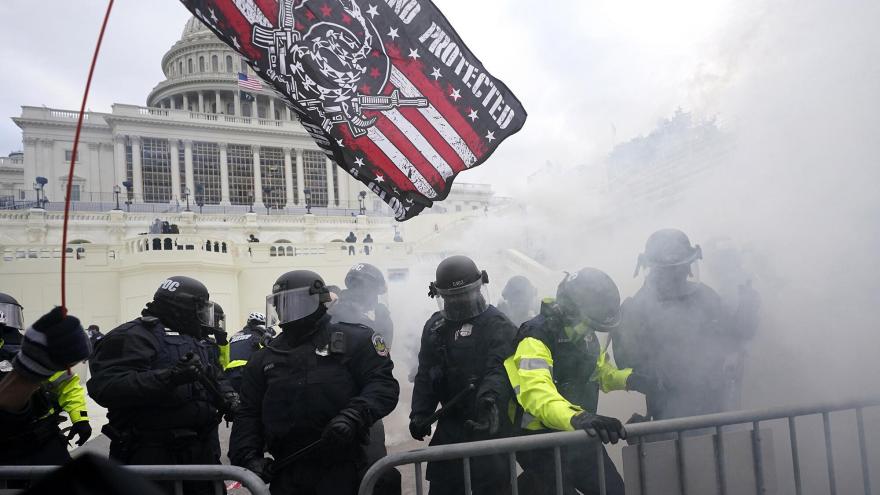 Thirty-eight Capitol Police officers have tested positive for Covid-19 since the Capitol riot on January 6. This image shows police holding off Trump supporters who tried to break through a police barrier at the Capitol in Washington.

It's unclear how many of the 38 officers may have been on duty during the attack or when they contracted the virus. But health officials have worried that the mass of largely unmasked people, many shouting and pushing, would result in the spread of the virus. Several police officers were directly assaulted during the insurrection.

By Friday, 19 Capitol Police officers had tested positive in the more than two weeks since the attack, Gus Papathanasiou, chair of the United States Capitol Police Labor Committee, told CNN in an email. The union could also not confirm that those officers were on duty the day of the attack.

"I do think you have to anticipate that this is another surge event. You had largely unmasked individuals in a non-distanced fashion, who were all through the Capitol," former US Centers for Disease Control and Prevention director Dr. Robert Redfield said in an interview earlier this month with the McClatchy newspaper group.

Several lawmakers tested positive in the wake of the attack, with some Democrats saying they tested positive after sheltering in place with other members of Congress who were not wearing masks.

"Following the events of Wednesday, including sheltering with several colleagues who refused to wear masks, I decided to take a Covid test. I have tested positive," New Jersey Rep. Bonnie Watson Coleman tweeted on January 11.

A statement from her office said that the congresswoman "believes she was exposed during protective isolation in the US Capitol building as a result of insurrectionist riots. As reported by multiple news outlets, a number of members within the space ignored instructions to wear masks."

CNN has previously reported that six House Republicans were captured on video refusing masks offered by a colleague during the US Capitol insurrection.

Lawmakers and Capitol staff received a memo from the Capitol's attending physician warning of a possible risk of Covid-19 exposure after a large group of lawmakers were forced to gather in a secure location during the breach of the US Capitol.

"On Wednesday January 6, many members of the House community were in protective isolation in (a) room located in a large committee hearing space. The time in this room was several hours for some and briefer for others. During this time, individuals may have been exposed to another occupant with coronavirus infection," Dr. Brian P. Monahan wrote in the January 10 memo.