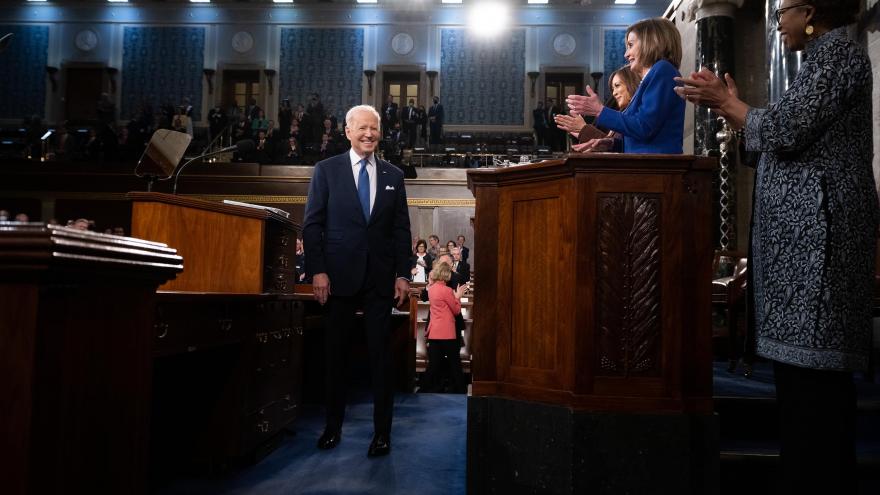 (CNN) -- President Biden's State of the Union address reached more than 33 million people in the United States on Tuesday night, according to preliminary Nielsen ratings.

Around the world, Biden's message about the Russian invasion of Ukraine was seen by a far larger total audience, but there is no standardized way to measure viewership across countries and platforms.

In just his own country, 33 million people watched Biden's speech across nine different English-language networks, according to overnight ratings.

That figure will rise once smaller networks, Spanish-language viewing and out-of-home viewing are all factored in.

But Tuesday night's incomplete total is already higher than the overall total for Biden's first address to a joint session of Congress last April.

Nielsen estimated that 26.9 million people watched that speech across 16 cable and broadcast networks.

High interest in the war in Ukraine certainly contributed to higher viewership of Biden's address this time.

CNN on Tuesday recorded its highest audience for a State of the Union address since 2009, the year of newly-inaugurated president Barack Obama's first address to a joint session of Congress.

Ratings for CNN and Fox News have been highly elevated for the past week, reflecting widespread American interest in war coverage.

During the State of the Union, Fox News had the largest overall audience, with about 6.9 million viewers. ABC was the highest-rated broadcast network, with 5.9 million viewers, and CNN averaged 4.6 million.

Nielsen's live-TV estimates don't account for all the ways an event like a presidential address is delivered all across the internet, not to mention radio and other formats.