31 states don't require schools to teach about the Holocaust. Some laws are changing that 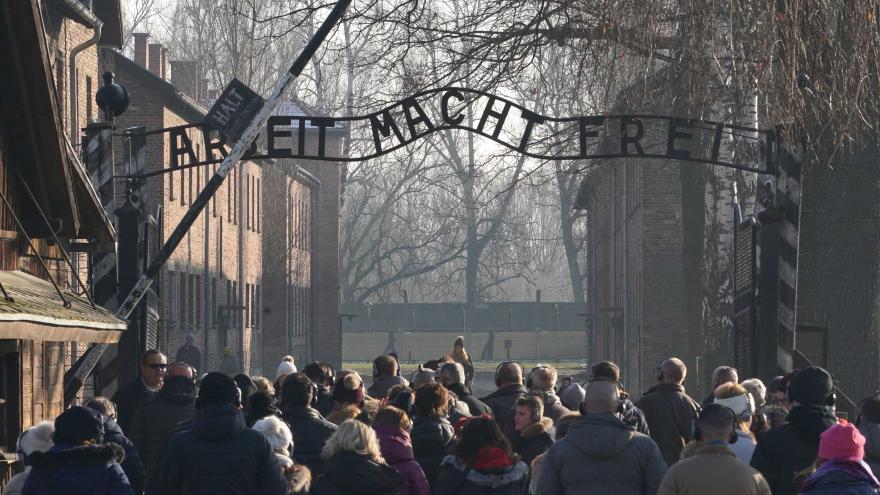 (CNN) -- Politicians like Rep. Marjorie Taylor Greene and others shouldn't liken contemporary events to the Holocaust because such comparisons cheapen the horrific magnitude of the genocide of 6 million Jews, historians and advocacy groups say.

"The Holocaust was a unique event in human history, encompassing evils so great it is nearly indescribable," said Amy Lutz, a spokesperson for the St. Louis Kaplan Feldman Holocaust Museum. "Contemporary comparisons to the Holocaust as a whole are inappropriate and should have no place in our public discourse."

Last week, Greene compared House Speaker Nancy Pelosi's decision to continue to require members of the House to wear masks on the chamber floor to steps Nazis took to control the Jewish population during the Holocaust. Her comments were swiftly condemned.

But Greene is far from the first public official to wade into controversy over comments referencing the Holocaust. An Alaska state lawmaker and Alexandria Ocasio-Cortez have also gotten into hot water over Holocaust comparisons.

Anti-vaccination and anti-lockdown protesters, in arguing about infringements on civil liberties, have made similar comments during the pandemic. And with a recent uptick in anti-Semitic incidents in the US amid tensions over the Israeli-Palestinian conflict, Jewish advocacy groups and Holocaust museums are speaking out against the dangers of such analogies.

Some officials are calling for more education about the Holocaust to counter misinformation and promote understanding.

Nineteen US states require Holocaust education as part of the public school curriculum, said Andy Hollinger, a spokesperson for the United States Holocaust Memorial Museum in Washington. That includes Arkansas, which passed a bill last month requiring educators to teach Holocaust history in schools beginning in 2022.

But 31 states do not. Holocaust awareness advocates would like to change that.

Holocaust analogies have become so common there's a word for them

Comparisons to the Holocaust, the systemic extermination of millions of Jews by Nazi Germany during World War II, have long been frowned upon. Some historians and Jewish advocacy groups argue that the sheer scale and magnitude of the Holocaust cannot be likened to anything today.

The Auschwitz Memorial, which runs a museum at the site of the former Nazi concentration camp, responded to Greene's comments by saying that citing the Holocaust in a debate about public health "is a sad symptom of moral and intellectual decline."

Holocaust analogies demonize, demean and intimidate their targets, said Edna Friedberg, a historian at the United States Holocaust Memorial Museum. While it's not a new trend, it's escalating and turning the Holocaust into "the epithet to end all epithets," she said.

"Nazis seem to be everywhere these days. I don't mean self-proclaimed neo-Nazis. I'm talking about folks being labeled as Nazis, Hitler, Gestapo, Goering — take your pick — by their political opponents," Friedberg wrote in a 2019 essay titled "Why Holocaust Analogies are Dangerous."

"American politicians from across the ideological spectrum, influential media figures, and ordinary people on social media casually use Holocaust terminology to bash anyone or any policy with which they disagree. The takedown is so common that it's even earned its own term, reductio ad Hitlerum."

Reductio ad Hitlerum, a variation on a phrase in Latin, means invalidating someone else's position and dismissing it as similar to views held by Adolf Hitler or the Nazi Party. In short, playing the Nazi card.

"At a time when our country needs dialogue more than ever, it is especially dangerous to exploit the memory of the Holocaust as a rhetorical cudgel," Friedberg wrote. "We owe the survivors more than that. And we owe ourselves more than that."

Recent studies have highlighted the need for more education in the US about the Holocaust.

A 2020 study by the Pew Research Center found more than half of Americans didn't know that 6 million Jews were killed in the Holocaust. Most adults know what the Holocaust was and when it happened, but only 45% got the number of victims right, according to the Pew survey.

"This raises an important question: Are those who underestimate the death toll simply uninformed, or are they Holocaust deniers -- people with anti-Semitic views who claim that the Holocaust was invented or exaggerated by Jews as part of a plot to advance Jewish interests?" the Pew survey asked.

A similar US study last year by the Conference on Jewish Material Claims Against Germany, a group which seeks restitution for victims of Nazi persecution and their heirs, found a similar lack of Holocaust knowledge.

At least 63% of those surveyed didn't know that 6 million Jews were killed, and 36% thought the death toll was under 2 million, the study found.

"The results are both shocking and saddening and they underscore why we must act now while Holocaust survivors are still with us to voice their stories,"said Gideon Taylor, president of the Claims Conference, as the group is informally known, in a statement.

In one of the survey's more disturbing findings, 11% of millennial and Gen Z respondents said they believe Jews caused the Holocaust.

"We need to understand why we aren't doing better in educating a younger generation about the Holocaust and the lessons of the past," Taylor added. "This needs to serve as a wake-up call to us all, and as a road map of where government officials need to act."

To help combat these misunderstandings, the United States Holocaust Memorial Museum will mount a traveling exhibition, "Americans and the Holocaust," at public and university libraries across the country through 2023.

"Teaching about the Holocaust and its timeless lessons, including the dangers of unchecked antisemitism, is the foundation of all of our work," Hollinger said. "We offer free education resources and training for educators. Our online Holocaust Encyclopedia, the definitive digital resource on the Holocaust, is available in 19 languages."

Some states are requiring schools to teach about the Holocaust

To ensure students learn about the Holocaust, some states are taking action.

Massachusetts lawmakers are pushing for mandatory education on the Holocaust and other genocides after a high school football coach was fired for allegedly using anti-Semitic language for play calls.

In the Claims Conference study, Wisconsin had the highest score in Holocaust awareness among millennials and Generation Z while Arkansas had the lowest.

Wisconsin passed a bill in April that requires social studies classes in middle schools and high schools to teach about the Holocaust and other genocides.

"This bill will affect generations of kids in our state and bring increased awareness ... in our schools to the tragedies of the Holocaust, the pervasiveness of anti-Semitism to this day, and hopefully cultivate a generation that is more compassionate, more empathetic and more inclusive," Wisconsin Gov. Tony Evers said in a statement.

Under the new law school districts, independent charter schools and private schools taking part in a choice program must teach about the Holocaust and other genocides at least once in grades five through eight, and in high school.

Arkansas just passed a similar measure that goes into effect in the 2022-2023 school year.

Like Wisconsin, the law in Arkansas calls for Holocaust lessons between fifth and 12 grades. Experts believe learning about genocide at a young age will lead to greater understanding and tolerance later on.

The Arkansas bill states that the lessons will help teach students about "the ramifications of bullying, bigotry, stereotyping and discrimination" while encouraging "tolerance of diversity and reverence for human dignity for all citizens."