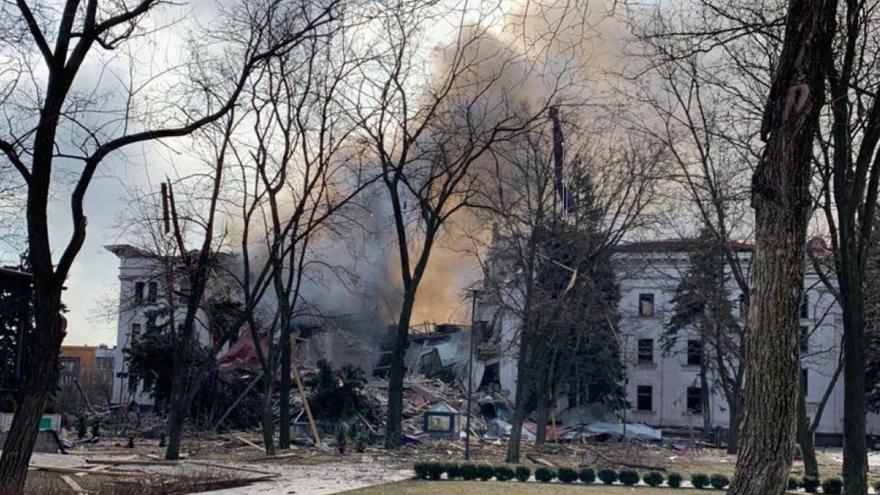 (CNN) -- About 300 people are believed to have died in a Russian attack on a theater in Mariupol nine days ago, the city council has said, citing eyewitness reports.

The March 16 bombing of Mariupol's Drama Theater, where Ukrainian officials say up to 1,300 had sought refuge, was among the most brazen of Russia's attacks on civilians since its invasion began in late February.

Painted on the ground outside the building -- in giant Russian letters -- was the word "CHILDREN." The message -- large enough to be viewed from the sky -- was scrawled near a public square. Russia has denied its forces hit the theater, claiming instead that the Azov battalion, the Ukrainian army's main presence in Mariupol, blew it up.

Announcing the update on its Telegram channel, the city council said: "Unfortunately, we start the day with bad news. There is information, based on eyewitnesses, that about 300 people died in the Drama Theater in Mariupol as a result of a bombing by Russian aircraft.

"We still do not want to believe in this horror. We still want to believe that everyone managed to escape. But the words of those who were inside the building at the time of this terrorist act say otherwise."

CNN has been unable to independently verify the death toll.

Earlier this week, Petro Andriushchenko, an adviser to Mariupol's mayor, put the number of estimated survivors of the bombing at around 200.

"The occupier knew where he was hitting. He knew what the consequences might be, and anyway the bombs fell on this place," the city council statement Friday continued.

Video of the aftermath of the bombing, which emerged recently on social media, shows people making their escape from the dusty and debris strewn building.

Holes in the walls can be seen as people make their way down a staircase to leave the theater.

"The missile hit right in the center of the Drama Theater," a man's voice can be heard saying.

In a second video, which shows massive internal structural damage to the building, a man's voice offers reassurance that he and others with him on the ground floor of the building were not injured in the attack. But he expresses fears that many others who were sheltering in the building remain buried under the rubble.

The theater was being used as one of the main shelters in Mariupol, which has been under intense bombardment since the early days of Russia's assault on Ukraine.

Information about the full extent of the attack has been slow to emerge due to the almost complete breakdown of essential services in the city, including communication networks.

The coastal city has been under siege for several weeks and has seen some of the worst attacks in the war since Russia began its invasion of Ukraine in February. There is still no word on possible casualties after a separate attack on an art school building that was also being used as a shelter by up to 400 people.

Basic services like gas, electricity and water, are all out in the city. Bodies are being left in the street because there is either no one left to collect them, or it is simply too dangerous to try.

Speaking in a televised message, Vereshchuk said the corridors will link the two cities with Zaporizhzhia, which lies to the north and is still in Ukrainian hands.

Over the last week, Russian forces have been deporting thousands of Mariupol residents against their will to far-flung cities in Russia, according to city officials and witnesses. And on Monday, Moscow called on Mariupol to surrender -- a notion Ukraine swiftly shot down.

Andriushchenko told CNN on Sunday that the battle for the city has made it impossible to retrieve and identify the dead, or treat the wounded.

In a video message posted to Facebook in the early hours of Sunday, Ukrainian President Volodymyr Zelensky said the siege of Mariupol would go down in history as a war crime. "To do this to a peaceful city ... is a terror that will be remembered for centuries to come," he added.