3 years ago, a massive algae bloom in Florida killed 2,000 tons of marine life. It's threatening again 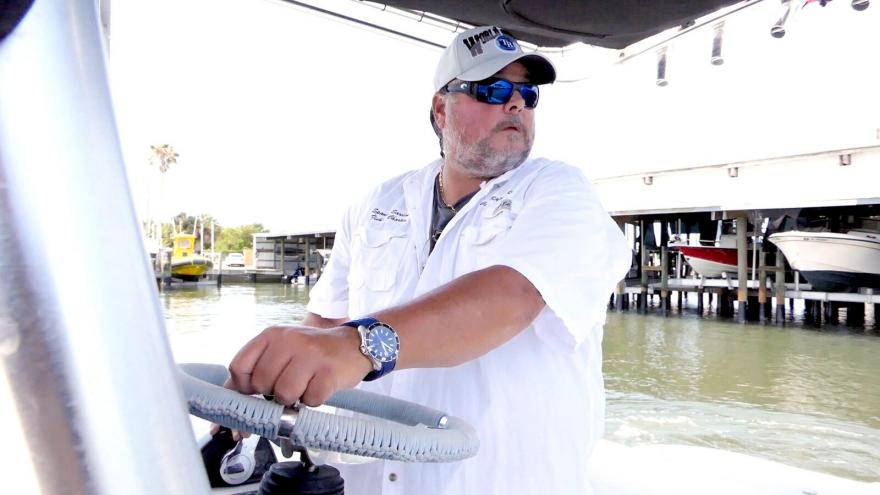 Rafael Rios, seen in this photo, has owned a charter fishing boat out of St. Petersburg, Florida, for 15 years and has been fishing the waters of Tampa Bay for 40 years.

(CNN) -- It's not just tourists who invade Florida in the summer.

The colorfully named, obnoxious -- and sometimes deadly -- microorganisms known as red tide and blue green algae also take advantage of the change in temperature to proliferate. And it causes major problems.

Both types of algae bloom are starting to make their presence known along some of southwestern Florida's most beautiful shorelines. Whether they're moving in for the summer or just teasing remains to be seen.

Many of those who make their living on the water are fairly sanguine about it.

"I believe red tide is going to be here with us every summer," said Rafael Rios, who has owned a charter fishing boat out of St. Petersburg for 15 years but said he has been fishing the waters of Tampa Bay for 30 years. "There's years we don't see any. There's years we see a lot more."

Red tide and blue algae come from different microorganisms. Red tide is caused by the Karenia brevis species while a report issued to Manatee County commissioners recently identified the cyanobacteria Lyngbya as the cause for the local blue green algae outbreak.

Blue green algae have been blooming the past few weeks in the waters around Tampa Bay, including Sarasota Bay, the Intracoastal Waterway and Terra Ceia Island, which is located in Manatee County, due south of Tampa.

Manatee residents knew the threat was upon them about 10 days ago when the Florida Department of Environmental Protection and the Florida Fish and Wildlife Conservation Commission placed signs along Frog Creek and other parts of the Terra Ceia Preserve State Park, warning of the dangers of blue green algae.

But red tide is the bigger concern.

State and federal agency maps for the summer of 2018 and the fall of that year show heavy red tide outbreaks in six counties, from Pinellas on the north to Collier on the south.

This year, the latest map by the Florida Fish and Wildlife Conservation Commission, issued in a May 21 status report, shows high concentration of red tide in Lee and Collier counties and low concentrations in four counties.

Florida health officials in Manatee County issued a warning late last week, urging people to not swim near dead fish and advising anyone with chronic respiratory problems to stay away from beaches altogether.

A fishing village at the mercy of the red tide

The fishing village of Cortez, in southern Manatee County, would be hit hard by a massive red tide outbreak, just as it has been before.

Karen Bell's family has been fishing the local waters for 100 years. She owns a fish wholesale and retail business in Cortez that employs 25 workers, and she does business with 60 anglers, including the captains of the 18 fishing vessels her company owns.

Most of those folks are at the mercy of red tide.

"The 2018 red tide was tough on both fishermen and fish house," she recalled. "There was very little inshore production for about 10 months."

The harvest along coastal waters was down about 75%, she said.

"The inshore species we did get came from fishermen willing to travel far enough away where red tide wasn't present," Bell said. "Some made long boat rides and others trailered their boats. It was a tough year."

For now, though, all seems well.

"The fishermen of Cortez are keeping their eyes on local water conditions," Bell said. "So far, they have seen some algal blooms, but not too much beyond that. The winds have kept them off the water this week. They're hoping the turbulence created by the weather will help break up any static water where algae growth would thrive."

Charter boat captain Rios said he hasn't come across any red tide either.

Red tide is not a new phenomenon

The Florida Department of Health notes that red tides were documented in the southern Gulf of Mexico in the 1700s and along Florida's Gulf Coast since the 1840s. But the Florida Fish and Wildlife Conservation Commission says Karenia brevis, the microorganism responsible for red tide, was not identified until 1946.

The blooms don't necessarily have to be red or blue green. The US Centers for Disease Control (CDC) says: "Blooms can look like foam, scum, mats, or paint on the surface of the water. A bloom can change the color of the water to green, blue, brown, red or another color."

The health agency also notes that blooms can become dangerous if they produce toxins, use up oxygen in the water, release harmful gases or become too dense.

Algae blooms require the right combination of circumstances to flourish, namely sunlight, slow-moving water and nutrients such as nitrogen and phosphorous.

And although algae blooms have been recorded for hundreds of years, the Environmental Protection Agency points out: "Nutrient pollution from human activities makes the problem worse, leading to more severe blooms that occur more often."

Those nutrients come from runoff from agriculture, stormwater and wastewater, the Fish and Wildlife Commission says.

Runoff is likely what caused a massive algae bloom that on May 11 covered 500 square miles of Lake Okeechobee in southern Florida.

The release into Tampa Bay of contaminated water from the Piney Point gypsum stack in April to keep the walls from collapsing remains a major concern.

"More than 215 million gallons of wastewater containing over 200 tons of nitrogen dumped into Tampa Bay over the course of just 10 days is a recipe for disaster," said Justin Bloom, founder of the Suncoast Waterkeeper environmental organization. "Though we have not yet seen the intensity of harmful algae blooms that we feared, the pollution is out there, and it will likely take years to gain a good understanding of the damage done to this delicate but resilient estuary.

"While it's unlikely that we will be able to make a direct correlation between environmental harm manifested in Tampa or Sarasota Bays, it would be absurd to suggest that the impact isn't significant."

Suncoast Waterkeeper and four other environmental groups filed notice May 17 that they want to enter into formal dialog with representatives from the Florida Department of Environmental Protection, the Port Authority of Manatee County and HRK Holdings LLC, the owner of Piney Point.

If these talks fail, they threaten to file a federal lawsuit in Tampa.

By filing suit, the environmental organizations say, they want Piney Point to close permanently and to focus attention on what they consider regulatory failures throughout the state.

The Department of Environmental Protection took over ownership of the Piney Point phosphate fertilizer plant in 2001 after the then-owner suddenly filed for bankruptcy and abandoned the property.

According to the legal document filed by the environmentalists, the Department of Environmental Protection dumped about 1.1 million gallons of wastewater into Tampa Bay and Bishop Harbor between February 2001 and February 2004.

The Manatee Port Authority is part of the legal notice because it stored dredged material from Tampa Bay at Piney Point. The Department of Environmental Protection approved that storage.

Those actions resulted in violations of the Clean Water Act, the Resource Conservation and the Recovery Act and Endangered Species Act, according to the legal notice by the environmental organizations.

Alexandra Kuchta, deputy press secretary for the Department of Environmental Protection, told CNN in a May 18 email that the state agency is not responsible for the Piney Point incident in April.

"While we cannot comment on pending litigation," the email said, "what I can tell you is the department is committed to holding HRK Holdings Inc. and all involved parties accountable for this event, as well as ensuring the closure of this site once and for all so that this is the final chapter of Piney Point."

A local representative for Piney Point, who declined to give his name, referred CNN to principal owner William "Mickey" F. Harley III.

Harley did not answer two calls from CNN on May 18 and his voice mailbox was full. He also did not respond to two text messages that same day.

But an HRK spokesperson said in a statement provided to the press in April that the Department of Environmental Protection was at fault for not taking corrective measures in the years before April's leak. HRK had informed the state agency of the magnitude of the problem, spokesperson Tom Richards said.

The Port Authority of Manatee County also declined comment in a May 18 email to CNN.

"We have turned the matter over to legal counsel," said Virginia Zimmermann, director of communications and public relations.

It's still too early to forecast what this year will bring

Strong winds from the east have likely helped to dissipate some of algae blooms. On Florida's West Coast, onshore winds and water movement typically bring algae blooms to the shore. Offshore winds push it out to open water.

But it's still too early to forecast what this year will bring. Red tide typically peaks in summer and fall. And it can last days, weeks, months or even a year.

Bell, the Cortez fishing business owner, recalls her father telling her that after he returned from World War II, an awful red tide enveloped the Manatee County fishing village. He could not fish locally, so he went to Campeche, Mexico.

"I always think of that because, although I'm sure what we do with fertilizers and runoff almost certainly has negative effects, red tide is a naturally occurring phenomenon," Bell said. "The point being is that red tide is probably here to stay, but as stewards of the environment, we should do all we can to not add to the problem."

Correction: An earlier headline on this story incorrectly described the amount of marine life killed by a red tide bloom in 2018. It was 2,000 tons. The story has also been updated to correct the number of years Rafael Rios has been fishing locally.