3 people were killed in workplace shooting at Maryland plant. The suspect and a trooper were wounded in an ensuing shootout 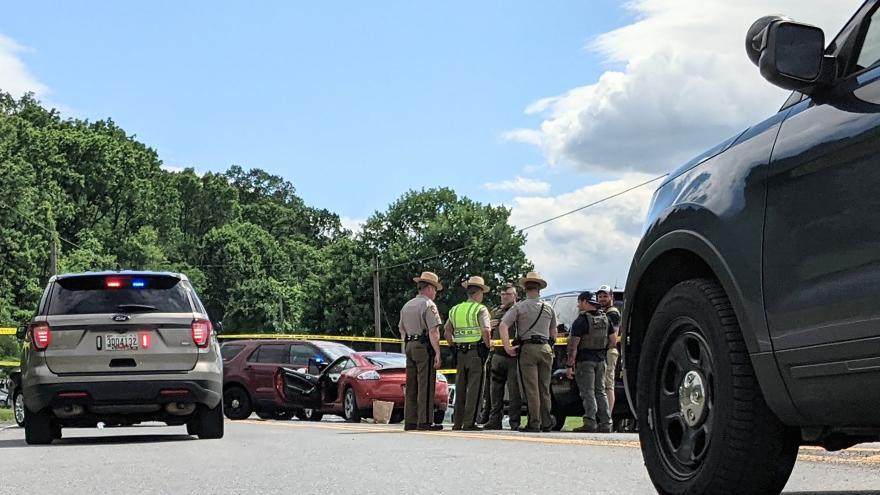 (CNN) -- A 23-year-old man shot four co-workers -- three fatally -- at a manufacturing plant in western Maryland on Thursday before fleeing the scene and exchanging gunfire with state police, authorities said.

A trooper and the suspect were wounded and hospitalized, according to Lt. Col. Bill Dofflemyer of the Maryland State Police (MSP).

Investigators have not yet established a motive for the shooting, which occurred at about 2:30 p.m., Washington County Sheriff Douglas W. Mullendore told reporters at a briefing.

The Washington County State's Attorney's Office is working to determine charges for the suspect, who is not being named at this time, according to a news release from the MSP.

The fatal incident is the 254th mass shooting this year, as the country is on pace to match or surpass last year's total, according to the Gun Violence Archive. It comes as the US House of Representatives has passed several bills aimed at gun reform. Those measures have little chance of passing in the Senate.

The victims and suspect were employees of Columbia Machine, Mullendore said. The company makes concrete products equipment, according to its website.

The wounded state trooper, who is a 25-year veteran of the agency, was treated for his injuries and released, according to an update from MSP. The suspect was also wounded after at least one of the troopers who responded to the scene returned fire and struck him. He was still being treated Thursday evening, police said.

Police from the nearby town of Smithsburg were first to arrive at the plant and discovered one victim in a field near the business, Mullendore said. A news release from the sheriff's office said there were four victims total at the plant, three of whom were dead.

State police received a description of the suspect and his vehicle, and three troopers found him driving about five miles from the shooting scene.

"When troopers went to stop the vehicle, the suspect immediately started firing multiple (bullets) at the troopers," Dofflemyer said. A pistol was recovered at the second shooting scene, authorities said.

The sheriff identified the victims who were killed as Mark Alan Frey, 50; Charles Edward Minnick Jr., 31; and Joshua Robert Wallace, 30. The other victim was Brandon Chase Michael, 42; police earlier said he was critically injured.

One of the victims, Wallace, is being remembered by friends and family as a happy and giving man who enjoyed hunting and fishing, according to Teena Sanders, whose niece was in a relationship with Wallace.

According to Sanders, Wallace worked at the factory since December 2021.

"He was very well liked by everyone that knew him." Sanders told CNN. "If someone needed something, he was there to give a helping hand. When he loved, he loved with his whole heart."

Smithsburg is about 75 miles west of Baltimore. It is about 100 miles from the border with West Virginia, where the suspect lives, according to the sheriff.

The Washington County Sheriff's Office is leading the homicide investigation with help from the FBI and Bureau of Alcohol, Tobacco, Firearms and Explosives office in Baltimore, according to MSP.

Any troopers involved with the shooting "will be placed on administrative duty" until the investigation is complete, per agency protocol, MSP said.

Columbia Machine CEO Rick Good said Friday the company is "deeply saddened" and working with authorities as the investigation continues.

"Our highest priority during this tragic event is the safety and well-being of our employees and their families," he said. "Our thoughts and prayers are with those that lost family members or were affected by this tragic event."