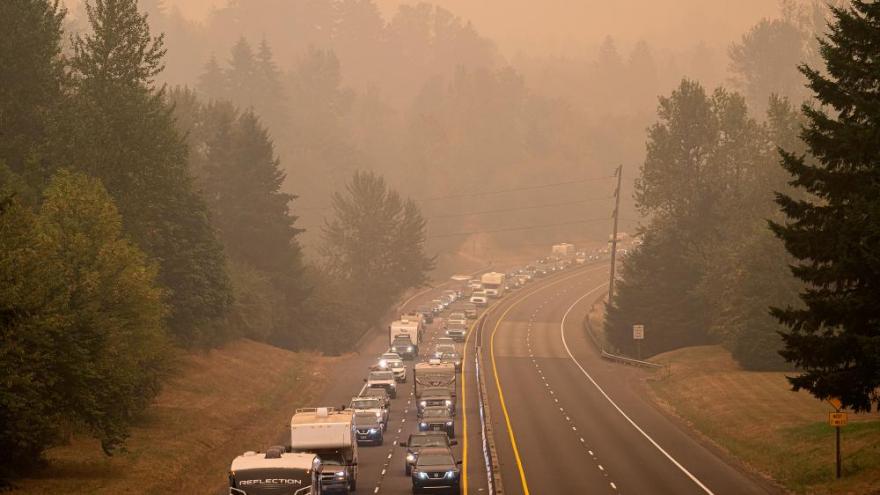 Large-scale evacuations throughout Oregon have been prompted by multiple wildfires in the state.

(CNN) -- Three people in Multnomah County, Oregon, are accused of setting up an illegal roadblock north of the Riverside Fire evacuation zone this week.

The Sheriff's Office says Joshua Smith, Travis Lucky and Michael Meier are being cited for disorderly conduct after allegedly blocking an intersection east of Corbett. It is unclear why the three men set up the roadblock.

More than 938,000 acres in Oregon have been destroyed by 12 fires burning in the state, according to the National Interagency Fire Center (NIFC). There are 59 uncontained fires burning in the West, the NIFC said Friday. Multiple wildfires have burned nearly 6 million acres in Washington, Oregon and California, claiming the lives of at least 34 people.

"The Multnomah County Sheriff's Office will not tolerate this type of illegal activity," Reese said in a statement announcing the charges.

"If you see this activity or are stopped by a civilian, call 911, and a deputy will respond and investigate. We encourage people to call the Sheriff's Office to report suspicious activity, and to not take action on their own."

Fifteen arrests have been made in connection with looting in evacuation zones, Roberts said, and some citizens are expressing concern.

Law enforcement agencies are also dealing with fears stoked by unfounded conspiracy theories that far-left activists are starting fires deliberately and cutting down power lines, added Roberts. He also said that it is illegal for any individuals to set up armed checkpoints.