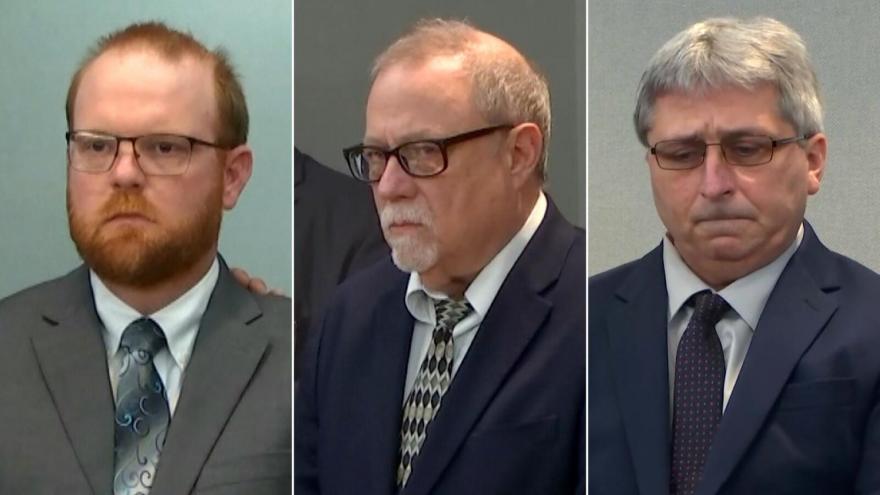 (CNN) -- A sentencing hearing has been scheduled for the three men convicted of murdering Ahmaud Arbery as he ran through their south Georgia neighborhood on February 23, 2020.

Travis McMichael, his father Gregory McMichael and their neighbor William "Roddie" Bryan are scheduled to again appear before Judge Timothy Walmsley, the judge who presided over their state trial, on Friday, January 7, at 10 a.m.

The hearing will be held in the Glynn County Courthouse in Brunswick, Georgia, the same courthouse where the men were convicted in November.

The McMichaels and Bryan are currently being held in the Glynn County Detention Center, where they are also awaiting trial on separate federal hate crime charges, stemming from an April 28, 2021, federal grand jury indictment. Jury selection in the federal trial is scheduled to begin on February 7, 2022.

The McMichaels each face an additional charge of using, carrying, brandishing and discharging a firearm during and in relation to a crime of violence. The men have pleaded not guilty.

The McMichaels and Bryan were arrested more than two months after Arbery's killing in the Satilla Shores neighborhood outside Brunswick.

The men said they believed 25-year-old Arbery, who was Black, had committed a crime. Evidence introduced in the trial showed the men chased Arbery through the streets as he repeatedly tried to elude them. The McMichaels, who were armed, were in one vehicle, while Bryan, who joined while the chase was underway, followed in his own truck, assisting in and recording the chase. Arbery was unarmed and on foot.

Video of the killing showed Travis McMichael exit his truck and confront Arbery before fatally shooting him as the two tussled. McMichael's father watched from the bed of the truck.

The men pleaded not guilty, with the McMichaels claiming they were conducting a citizen's arrest and acting in self-defense, and Bryan saying he took no part in the killing.

Arbery was on a jog -- a common pastime, according to those who knew him -- when the McMichaels grabbed their guns and pursued him. Gregory McMichael, a former police officer and ex-investigator in the county prosecutor's office, told authorities Arbery and his son had struggled over his son's shotgun and Travis shot Arbery after he was attacked, according to a police report.

The McMichaels were arrested on May 7, 2020, and Bryan was taken into custody two weeks later. The case soon dovetailed with the killings of three Black people -- Breonna Taylor in Louisville, Kentucky, George Floyd in Minneapolis and Rayshard Brooks in Atlanta -- reigniting concerns over racial injustice and prompting civil unrest nationwide.