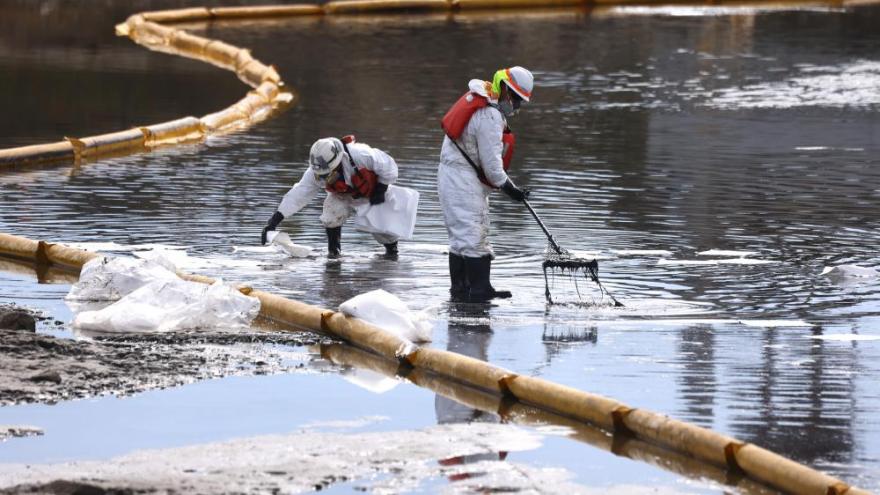 Three companies have been accused of illegally discharging about 25,000 gallons of crude oil into the Pacific Ocean off the Southern California coast in October, federal prosecutors announced, and pictured, workers on October 4, in Huntington Beach, California.

(CNN) -- Three companies have been accused of illegally discharging about 25,000 gallons of crude oil into the Pacific Ocean off the Southern California coast in October, federal prosecutors announced Wednesday.

Oil company Amplify Energy and its subsidiaries Beta Operating Company and San Pedro Bay Pipeline Company "acted negligently in at least six ways, including failing to properly respond to eight separate leak alarms over the span of more than 13 hours," according to the indictment filed in Los Angeles federal court.

The indictment said the companies also failed to properly restart the pipeline after it had been shut down following the leak alarms.

The companies face one misdemeanor count of negligent discharge of oil for allegedly continuing to operate the damaged 16-inch pipeline, on and off, until the morning after the leak began on October 1. The oil spread several miles off the coast of Huntington Beach, shut down businesses and beaches, and presented health hazards to residents and the environment.

After the charges were announced, Amplify Energy issued a statement calling their response to the leak "reasonable" and "prompt."

"Amplify Energy and its employees are committed to safe operations that keep our people, the environment, and the communities in which we operate safe at all times,'' the company said in the statement.

"That is the operating commitment we strive to uphold, and the prompt actions and reasonable care our employees demonstrated in responding to events on October 1 and 2 reflect that commitment.''

Negligently discharging oil carries a statutory maximum penalty of five years of probation for corporate defendants, as well as fines that could total millions of dollars, according to the US Attorney's Office for the Central District of California.

The pipeline was intact in October 2020 before it was deflected or deviated by 105 feet, eventually leading to damage to its casing and a 13-inch crack, Jason Neubauer, chief of the office of investigations and analysis for the US Coast Guard, said in October.

Video released by the Coast Guard showed marine growth on the damaged portion of the pipeline, which was initially enclosed in concrete. Neubauer explained the linear fracture on the pipeline could have been a crack, which got gradually worse over time.

"This event could be multiple incidents and strikes on the pipeline after the initial event, that we're pretty confident occurred several months to a year ago," Neubauer said.

The US Coast Guard, US Office of Inspector General, Environmental Protection Agency, and the FBI are continuing to investigate the oil spill.