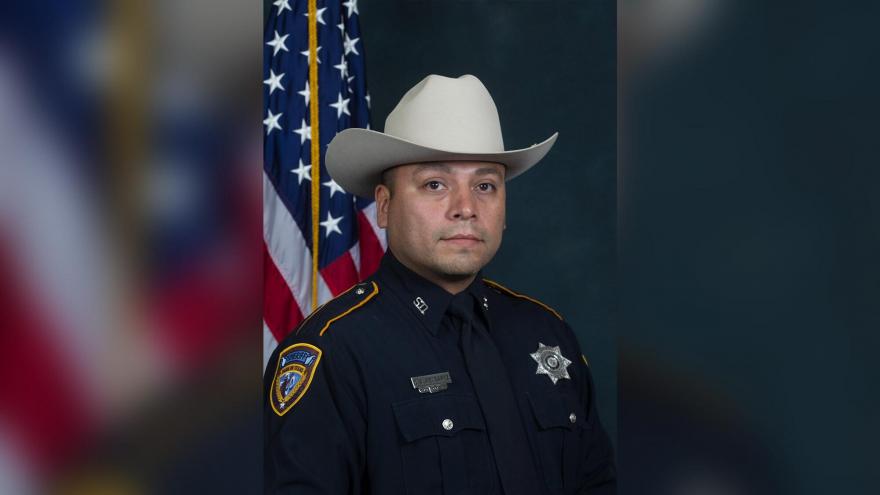 Harris County Sheriff's Deputy Darren Almendarez was shot and killed in a grocery store parking lot while he was off-duty, officials said.

(CNN) -- Three people are facing capital murder charges after an off-duty Harris County deputy was shot and killed while leaving a grocery store with his wife, officials said.

Deputy Darren Almendarez, 51, and his wife were walking to their truck at a Houston-area store around 8:35 p.m. Thursday when they saw a black Nissan Altima backed up to their vehicle and two men underneath the truck, the Harris County Sheriff's Office said in a news release.

Almendarez was able to return fire, shooting at least two of the suspects before they quickly drove away, the release said.

Almendarez was taken to Houston Northwest Hospital where he was pronounced dead, officials said. A short time later, according to the sheriff's office statement, two of the suspects arrived at the same hospital in the Nissan Altima with gunshot wounds.

All three are charged with capital murder, according to the court documents.

Stewart was denied bond at a hearing Friday, records show, and he has a bail review hearing Monday. Clark and Tardy each have preliminary court appearances Monday morning, according to court records.

Meanwhile, a procession for Almendarez is planned for Monday morning.

He served with the Harris County Sheriff's Office for 23 years and spent the past year working in the agency's auto theft unit, Gonzalez said. "He loved being a deputy," the sheriff added.

Texas Gov. Greg Abbott called for the death penalty to be applied in the case.