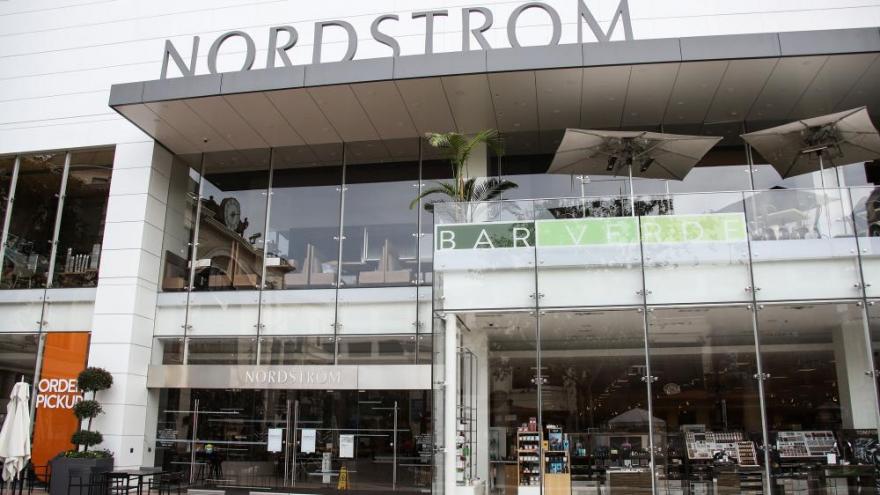 At least 20 people were involved in a burglary Monday night at the Nordstrom department store at The Grove retail complex in Los Angeles.

(CNN) -- At least 18 people broke into a high-end department store in Los Angeles and stole thousands of dollars in merchandise Monday night, the city's police chief said, in one of the country's latest store burglaries involving sizable groups of thieves.

The group used a sledgehammer and an electric bicycle to smash a window, allowing them to enter the closed Nordstrom department store at The Grove retail complex in Los Angeles around 10:40 p.m. PT, city police said.

The group, consisting of 18 to 20 people, stole at least $5,000 in merchandise and caused $15,000 in damage, Los Angeles Police Chief Michel Moore said Tuesday at a city police commission meeting.

Nearby police officers "heard the event" and saw vehicles driving away, and the officers pursued one of the vehicles, Moore said.

The pursuit ended in South Los Angeles, and three people in the vehicle were arrested in connection with the burglary, Los Angeles police spokesman Officer Drake Madison told CNN.

Officers recovered merchandise from the vehicle and one of the three people arrested, Moore said.

The burglary is one of the most recent in a series of similar crimes in some major US metropolitan areas, including San Francisco and Chicago.

About 80 people were involved in what police are calling a "smash-and-grab" incident Saturday night at a Nordstrom location in Walnut Creek, near San Francisco. People fled the store in at least 10 different vehicles, Lt. Ryan Hibbs at the Walnut Creek Police Department told CNN. Three suspects were arrested.

The manager of a nearby restaurant told CNN affiliate KPIX that the suspects were wearing masks and carried what appeared to be crowbars.

"There was a mob of people," Brett Barrett said. "The police were flying in. It was like a scene out of a movie. It was insane. ... It was a scary scene for a moment."

Police have not yet estimated a dollar amount for the stolen items, Hibbs said.

The incident followed a series of similar thefts Friday night in Union Square and surrounding areas in San Francisco, including at a Louis Vuitton store, a Burberry store, a jewelry store, a Bloomingdale's, a Walgreens, cannabis dispensaries and even an eyeglass shop, San Francisco Police Chief Bill Scott said at a news conference Saturday.

On Wednesday, at least 14 people forced their way into a Louis Vuitton store in Oak Brook, Illinois, and made off with at least $100,000 in merchandise, according to CNN affiliate WLS, based on interviews with the Oak Brook Police Department.

Police told WLS the individuals rushed into the store at Oak Brook Center Mall, took out garbage bags and began filling them with items. Surveillance video from the store, obtained by WLS, shows the chaotic scene as the masked shoplifters pour into the store grabbing handbags and other merchandise while shoppers rush out of the way.

Investigators have information on the three vehicles the thieves drove away in, according to Police Chief James Kruger. Oak Brook is about 25 miles west of Chicago.

Kruger told WLS his investigators are working with investigators in the Chicago suburb of Northbrook, where police say eight people took off with $66,000 worth of merchandise from a Louis Vuitton store at Northbrook Court Mall in October.

On November 1, at least 13 men wearing masks and gloves entered the same Louis Vuitton store and stole several items valued at $100,000. Northbrook is about 30 miles from Oak Brook.

"We don't know if there is an actual connection yet, but certainly there are similarities," Kruger said.