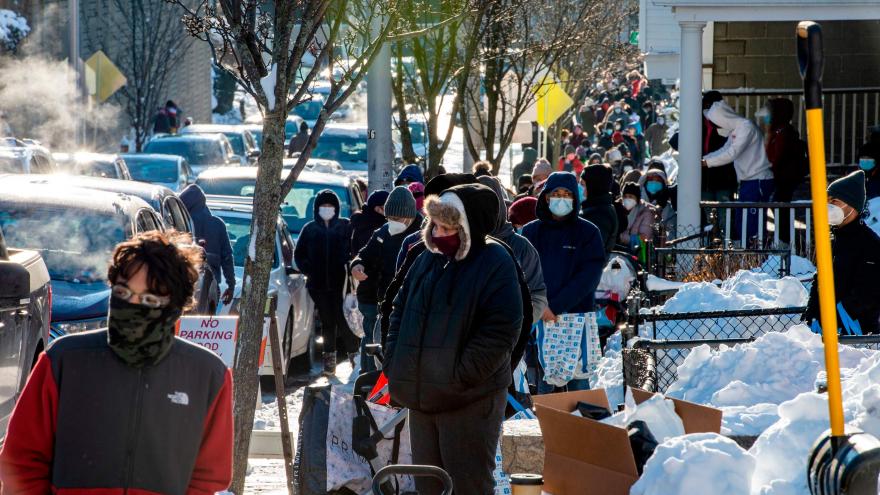 (CNN) -- Thousands more families just lost a loved one this holiday season as the US reported its second-highest number of coronavirus deaths in one day — 3,401 on Tuesday, according to Johns Hopkins University.

And in nine states, more people are hospitalized with Covid-19 than at any other point in this pandemic: Alabama, Arizona, Arkansas, California, Delaware, Georgia, Mississippi, New Hampshire and North Carolina, according to the Covid Tracking Project.

"We were bracing for this and hoping that we were wrong," said Dr. Esther Choo, a professor of emergency medicine at Oregon Health & Science University.

"But every holiday has been similar. And Thanksgiving, we saw the kind of travel that happened then. And people who are hospitalized in ICUs and dying now -- many of them are because of the Thanksgiving surge."

Health experts like Choo and Dr. Anthony Fauci, director of the National Institute of Allergy and Infectious Diseases, say the next 10 days could spark even more infections, hospitalizations and deaths than Thanksgiving did.

"Now we have an extended holiday between Christmas and New Year's. And according to AAA estimates, even though this year's travel is about 30% less than last year, it still means that 84 million people are going to be traveling over the holidays," Choo said.

"And it's not just the travel, it's what's happening on the other end -- where they're traveling to -- which is a lot of family-and-friend gatherings. So I think we are already bracing for the outcome of that, which will be well into the end of January, into February. ... And I have no doubt it will be surge on top of surge on top of surge."

A new strain has probably already spread in the US

Around the world, a mutated strain of the novel coronavirus is prompting concerns -- including whether it's more transmissible and whether current Covid-19 vaccines will work against it.

"I think I can be mostly reassuring," said Dr. Francis Collins, director of the US National Institutes of Health.

"First of all, this is not a surprise. This virus is an RNA virus. RNA viruses tend to change their instruction books slowly over time, which results in these kinds of variants emerging," he said.

"The good news is that the antibodies that these vaccines generate are quite effective in terms of attaching to multiple parts of the spike protein. And so if there's a change in it -- which is what the mutant has done -- we would expect that the vaccine should still be effective against that."

Pfizer and Moderna, makers of the two vaccines currently being deployed in the US, said they're testing their vaccines to see if they work against the new strain, which was first detected in the UK.

Scientists advising the UK government estimated the new strain could be up to 70% more transmissible than other variants.

Peter Horby, chair of the New and Emerging Respiratory Virus Threats Advisory Group (NERVTAG), said Monday that experts "now have high confidence that this variant does have a transmission advantage" over other variants.

The UK variant doesn't appear to cause more severe disease, and it appears that the Pfizer-BioNTech and Moderna vaccines will still be effective.

So far, the strain "has not been identified through sequencing efforts in the United States, although viruses have only been sequenced from about 51,000 of the 17 million US cases," the US Centers for Disease Control and Prevention said Tuesday.

"Given the small fraction of US infections that have been sequenced, the variant could already be in the United States without having been detected."

Some researchers think the strain likely arrived in the US in mid-November, and that many people in the US could already be infected with it.

"If I had to guess, I would say it's probably in hundreds of people by now," said Michael Worobey, head of the University of Arizona's department of ecology and evolutionary biology.

"It's very possible it's arrived multiple times in multiple places."

President-elect Joe Biden's pick to lead the CDC, Dr. Rochelle Walensky, said the agency will consistently update Americans about coronavirus during public briefings -- something that hasn't been done regularly in recent months.

"The public needs to know what we know," Walensky told CNN on Wednesday.

During previous major health events, the CDC has typically provided regular updates to the media. But during the Covid-19 pandemic, CDC public briefings have been rare.

Fauci, who will be Biden's chief medical adviser, said he believes the new administration won't send "mixed signals" about the pandemic.

"There will probably be a uniformity of message instead of mixed signals," Fauci told the FiveThirtyEight podcast, which aired Tuesday.

"I think there'll be more central guidance as opposed to leaving the states completely on their own."