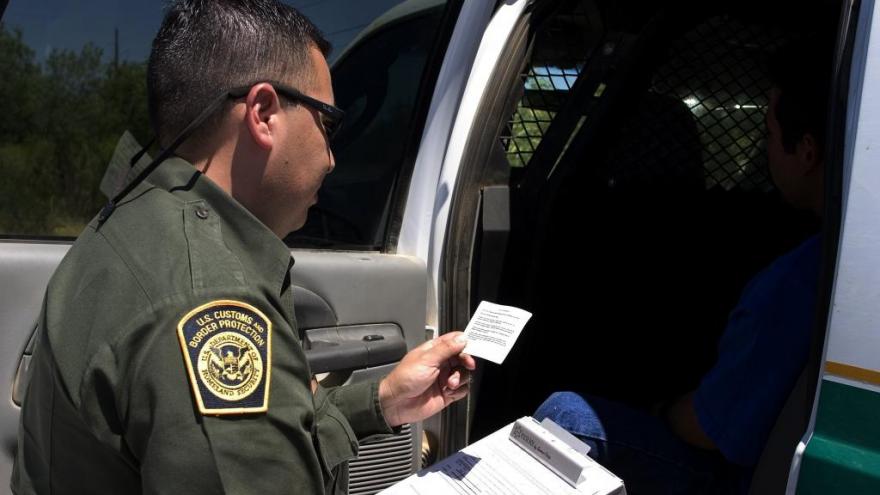 At least one other social media group with an apparent nexus to Customs and Border Protection has been discovered to contain vulgar and sexually explicit posts, according to screenshots shared with two sources familiar with the Facebook pages.

(CNN) -- At least one other social media group with an apparent nexus to Customs and Border Protection has been discovered to contain vulgar and sexually explicit posts, according to screenshots shared by two sources familiar with the Facebook pages.

The secret Facebook group, "The Real CBP Nation," which has around 1,000 members, is host to an image that mocks separating migrant families, multiple demeaning memes of Rep. Alexandria Ocasio-Cortez, a New York Democrat, and other derisive images of Asians and African Americans.

One meme posted following her Monday visit to a Texas border station depicts a manipulated image of her gesturing toward a water fountain with the caption "Is this a toilet?" Following her visit, Ocasio-Cortez charged that people were drinking water from a toilet at the station, an accusation that acting Homeland Security Secretary Kevin McAleenan has denied.

CNN obtained the images after a report published earlier this week of another secret Facebook group, called "I'm 10-15," for current and former Border Patrol agents that reportedly featured jokes about migrant deaths, derogatory comments about Latina lawmakers and a lewd meme involving at least one of them.

"Racism and sexism in the Border Patrol just doesn't belong," said the first source familiar with the images.

The existence of the group "I'm 10-15" was exposed by the investigative reporting group ProPublica. That Facebook group changed its name to "America First," and then archived the page on Monday, preventing any additional posts or comments, according to a second source and a screenshot of the page.

CNN has not been able to independently access and review either of the Facebook groups in question or verify how many group members in the private Facebook communities are or were affiliated with Customs and Border Protection.

Some members of "The Real CBP Nation" Facebook group reacted to the shuttering of "I'm 10-15" in screenshots of posts and comments.

"Disappointed on (sic) all of you who abandoned ship," said one commenter, along with two laughing emojis.

On Tuesday, another group member wrote, "Lost 7,000 members in a day. Impressive."

An additional comment said in part, "We're in this till the end #pleasedontjicmeorcalloig," which appears to be a reference to the Joint Intake Center and the Office of Inspector General.

"We have removed several pieces of content from the Group 'The Real CBP Nation' for violating our policies on Bullying and Harassment, Cruel and Insensitive content, and Sexual Exploitation of Adults. We believe in giving people a voice, but we also want everyone using Facebook to feel safe. That's why we have Community Standards and remove anything that violates them," said the spokesperson in a statement.

It was not clear when the content was removed.

On Friday, Customs and Border Protection spokesperson Matt Leas told CNN in a statement that the agency is "investigating the posts to determine the facts."

"If the investigation verifies that employees posted content in violation of CBP's code of conduct, the findings will inform management decisions regarding appropriate disciplinary action. CBP does not tolerate misconduct on or off duty and will hold those who violate our code of conduct accountable. These posts do not reflect the core values of the agency and do not reflect the vast majority of employees who conduct themselves professionally and honorably every day, on and off duty," he added.

On Monday, Customs and Border Protection said it had immediately informed the Department of Homeland Security Office of the Inspector General and initiated an investigation following a media report revealing the existence of the Facebook group "I'm 10-15."

Responding to an inquiry about the "I'm 10-15" posts, Customs and Border Protection's assistant commissioner for the Office of Professional Responsibility, Matthew Klein, said in a statement Monday that those posts were "hosted on a private Facebook group that may include a number of CBP employees."

The reports of possible social media misconduct this week prompted calls from agency leadership to hold anyone responsible for violating standards of conduct accountable.

"We take all the posts that were put out today very seriously. These do not represent the thoughts of the men and women of the US Border Patrol. Each one of these allegations will be thoroughly investigated," said US Border Patrol Chief of Operations Brian Hastings in an interview on "Newsroom" with CNN's Brooke Baldwin on Monday.

The issue is not new, however, for Customs and Border Protection. In 2018, a senior official warned all agency employees of potential discipline, after having been informed of a private Facebook group with inappropriate and offensive posts, according to a memo obtained by CNN.

"Recently the Agency was made aware of a private Facebook group page that only a specific group of CBP employee could access, on which inappropriate and offensive posts were made," Klein wrote.

The memo, dated February 2018 and titled "Social Media Posts," did not identify a specific Facebook group but reminded employees of Customs and Border Protection's standards of conduct and anti-discrimination and anti-harassment policies for workplace and off-duty employees that prohibit certain conduct on the grounds of discrimination or harassment.

This story has been updated to include statements from Facebook and Customs and Border Protection that were provided to CNN after publication.