27 million Californians receive texts to stay home after the state added nearly 170,000 cases in a week 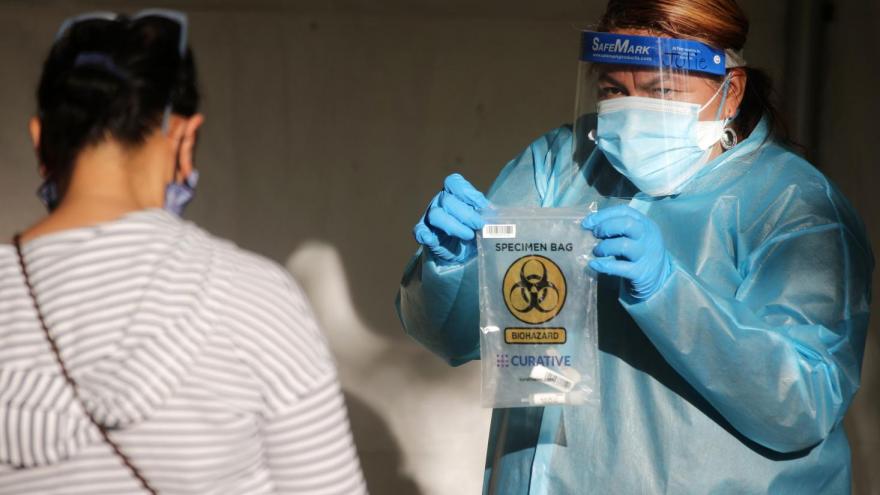 After a record number of new coronavirus cases in one week, more than two-thirds of California residents received a text asking them to stay home on Dec. 8. In this photo, a healthcare worker holds a specimen bag at a walk-up Covid-19 testing site on Dec. 2 in San Fernando, California.

(CNN) -- After a record number of new coronavirus cases in one week, more than two-thirds of California residents received a text asking them to stay home.

Text alerts went out to residents of Southern California and the San Joaquin Valley starting around 12 p.m. PT Tuesday, asking them to stay home and abide by newly enacted health orders, according to a tweet from California Governor's Office of Emergency Services.

Governments have used cellphones to warn residents about coronavirus since the start of the pandemic. New York City sent an emergency alert to phones in April, asking all licensed health workers to support its health facilities. And in October, officials in Utah sent an emergency alert to every phone in the state to warn about rapidly rising cases.

The California text message comes amid alarming coronavirus numbers. The state reported 169,354 new cases over the past seven days, which is the highest any state has reported over the course of the pandemic. Over the last two weeks, daily case counts in the state have more than doubled.

California also reached a grim milestone Tuesday when it recorded more than 20,000 deaths.

In the past two weeks, hospitalizations rose by 71% and ICU admissions saw a 68.7% increase, California Health and Human Services Secretary Mark Ghaly said at a news conference Tuesday. Ghaly expressed concern that with the strain, highly trained health care workers will "not be able to provide the kind of care Californians have come to expect."

Both Southern California and the San Joaquin Valley found themselves under the new health orders Sunday night as ICU capacity in each fell under the 15% threshold set by Gov. Gavin Newsom.

In November, Los Angeles County ordered all indoor and outdoor dining to close. While some officials said the move was necessary to mitigate spread, many worried about the economic impact.

A superior court judge Tuesday ruled county health officials "acted arbitrarily" in making the order, because they did not provide a "required risk-benefit analysis" to support the closures.

According to the judge, since county health officials could not provide scientific data that supports closing all outdoor dining, the Los Angeles County Department of Public Health is prohibited from imposing the ban beyond the original three-week time period, which ends December 16.