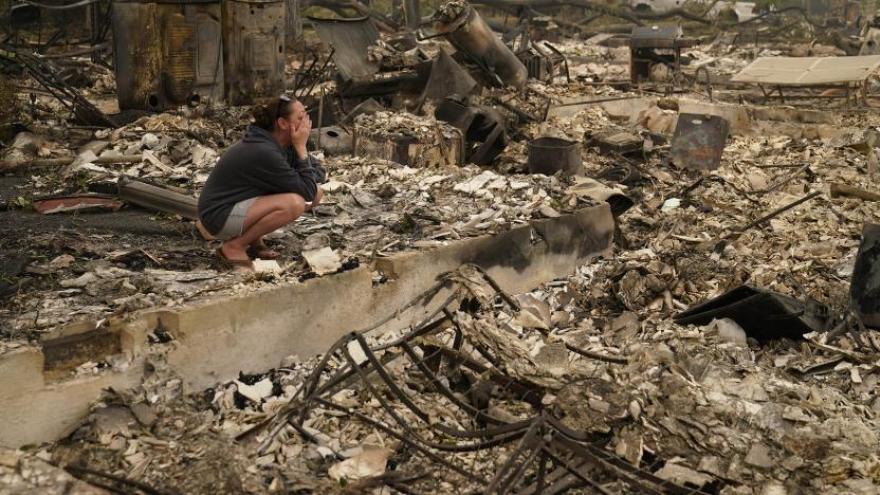 Desiree Pierce cries as she visits her home destroyed by the Almeda Fire, Friday, Sept. 11, 2020, in Talent, OR. At least 26 people have been killed in a devastating fire season across the West Coast.

(CNN) -- Deadly wildfires have blanketed swaths of the West Coast with unhealthy smoke, complicating efforts to fight the blazes and find dozens of missing people, and compounding the misery of thousands who've been displaced.

"You just never believe it's all going to go up in flames," Marian Telersky, who lost her home in the southern Oregon city of Talent, told CNN affiliate KOBI. "It's a lot to handle."

Fires have killed at least 28 people in the three contiguous West Coast states since mid-August, including 19 in California, many of them in the past few days.

Blazes this week have killed a 1-year-old boy and another child in Washington and eight people in Oregon, including a teenage boy who in his last moments huddled with his dog inside a car that was engulfed in flames.

Thousands have fled their homes in Oregon alone, including Lori Johnson, who was awakened in the middle of the night by law enforcement shortly before fire consumed her home in Mill City.

"I got out with no socks, no nothing -- literally, the clothes on our backs," she told CNN affiliate KATU from Salem, where she and her family are staying temporarily while trying to figure out what do next.

Across the West, 97 large fires were burning Saturday, including 12 in Idaho and nine in Montana, according to the National Interagency Fire Center.

Federal air quality monitors are warning that smoke is making for unhealthy air Saturday in most of California, Oregon and Washington and parts of Idaho. That smoke could make people more vulnerable to Covid-19, doctors say.

In California, three of the five largest wildfires in the state's history are burning now, officials say. Little rain, high temperatures and strong winds helped set the stage for the flames and fuel them. And officials say it may take a long time for them to stop.

The sheer number of blazes is taxing the resources used to battle them. Angeles National Forest Fire Chief Robert Garcia told CNN Saturday that his department is currently fighting fires with 500 personnel, when they usually have 1,000 to 1,500.

"This system is very, very well taxed right now with a number of large fires that are that are scattered, but particularly in California," Garcia said, adding that it's common for firefighters to work over 24 hours on a shift until relief comes.

With the current strain on the system, though, Garcia said "that relief isn't coming in necessarily in 24 hours. So we're having to find ways to maximize rest periods throughout the day."

In Oregon's Clackamas and Marion counties south of Portland, smoke was so thick that it was difficult to see more than 10 feet ahead Saturday morning.

Nailah Garner's dream home in Vida, Oregon, was reduced to ashes. She and her husband left their home on Monday after receiving a "Go now" alert on their phone while still in bed, according to CNN affiliate KOMO. She only found out about her home because her friend called her.

"It's all gone and it's like, it looks like a war zone hit it," Garner told KOMO through tears. "She had sadness in her voice, I could totally tell."

Carolee Brown told CNN she has relocated twice this week because of evacuation orders. She's been losing sleep, constantly monitoring her home's security camera online to see if it's still standing. As of Saturday morning, it was.

"It's unreal. You can't really fathom what is going on," she told CNN in Marion County. "You take what you think (you should), and you just get out."

Four of the eight people killed in Oregon's wildfires died in the Beachie Creek Fire in Marion County, according to a press release from the Marion County Sheriff's Office.

Two victims identified by the Marion County Medical Examiner's Office were Wyatt Tofte, 13, and Peggy Mosso, 71, both of Lyons, Oregon, more than 60 miles southeast of Portland.

Wyatt was found in a car with his dog in his lap while Mosso, his grandmother, was found in another car nearby. Her daughter and Wyatt's mother, Angela, attempted to save her and was badly burned.

Two other victims were located but have not been recovered due to "treacherous conditions," the release said.

One person has died in the Holiday Farm fire, another died in the White River fire and two people have died in the Almeda Drive fire, according to the Oregon Office of Emergency Management.

The state is preparing for a "mass fatality incident" based on how many structures have been charred, Oregon Emergency Management Director Andrew Phelps said Friday.

The Beachie Creek Fire left neighborhoods in rubble and has scorched more than 186,000 acres.

"We had 29 houses on our block," Monica Garrison told CNN affiliate KATU. "We have 10 left."

The Beachie Creek Fire is the largest in the state and has no containment, officials say. Firefighters are racing to slow the blaze down before it merges with the nearby Riverside Fire, which has burned more than 130,000 acres.

About 500,000 people in Oregon are under some type of evacuation alert. Actual evacuation orders have been issued for more than 40,000, according to the governor.

Walker was originally placed on leave due to an "internal personnel investigation," Capt. Timothy Fox with Oregon State Police told CNN in an email.

Fox did not elaborate on what the investigation entailed. Walker was appointed to fire marshal in 2014.

In California, firefighters are battling more than two dozen major fires across the state, but officials expressed hope Saturday that improving weather conditions will boost firefighters' efforts to control the flames.

Just northeast of Los Angeles, the Bobcat Fire is tearing through the mountainous Angeles National Forest -- and contributing to smoky air in the area.

"Thirty-plus years ago, I quit smoking. But I've started again in the last six days just from (breathing) the air," Mike Day, of nearby Monrovia, told CNN on Saturday.

Fires in the state have burned more than 3.2 million acres so far, many times higher than what was burned by this time last year, according to Cal Fire. More than 4,000 structures have been destroyed this year, fire officials said.

In the Sierra Nevada range north of Sacramento, the North Complex Fire has torn through the Berry Creek community and Plumas National Forest since a lightning storm sparked it August 17, consuming more than 252,000 acres.

That fire has killed at least nine people, including a 16-year-old boy who was fleeing the area in his vehicle, Butte County authorities say. More than a dozen were missing, the sheriff's office said this week.

John Tripp, who evacuated his home in Butte County, says he has no idea what he'll find when he returns.

The blaze is burning just miles from Paradise, which was devastated by the 2018 Camp Fire. People in part of that town were told to be ready to leave earlier in the week.

Five people have died in the LNU Lightning Complex fire which is burning in Colusa, Lake, Napa, Solano, Sonoma and Yolo counties, according to CalFire.

The CZU August Lightning Complex in San Mateo and Santa Cruz counties has killed one person, another person has died in the August Complex Fire in Tehama County and two people died in the Slate Fire in Siskiyou County, CalFire's update said.

President Donald Trump will visit California on Monday to get a briefing from local and federal emergency officials, the White House said Saturday. He's expected to be at McClellan Park in Sacramento County, some 70 miles south of the North Complex Fire.

The past five days in Washington have made for the state's second worst fire season in history, the governor said Friday. As of Saturday, 15 major fires were burning in the state.

Elsewhere in Washington, a 1-year-old boy died and his parents were badly burned as they tried to escape the wildfire, officials said.

The family was visiting their property in a rural area west of Spokane and evacuated in the middle of the night when the wildfire got closer. They abandoned their vehicle and ran to a river to flee the menacing flames, CNN affiliate KCRA reported. The couple was rescued from the river but their son did not make it.

Another child was killed in the Cold Springs Fire in Omak, near the Canadian border, according to officials.

"My heart breaks for the family of the child who perished in the Cold Springs fire. I am devastated. The DNR family is devastated. The pain that family is going through is unfathomable," Washington Commissioner of Public Lands Hilary Franz said in a statement on social media Friday.

Earlier this week, Gov. Jay Inslee visited Malden, a small town in eastern Washington, where 80% of the city's buildings -- including the fire station, post office, city hall and library -- were completely destroyed.

"It looked like a bomb went off," city officials said, according to CNN affiliate KIRO.

Many restaurants have shifted to more of an outdoor seating model in the last few months because of coronavirus, but many have now had to shut down or saw reduced customer traffic because of the poor air quality along the West Coast.

"Nobody wants to sit outside right now with all this smoke," J.R. Much, a bartender at Lockspot Café in Seattle, told CNN affiliate KOMO.

"We didn't think it was safe for our team," Zellers said. "We didn't want to encourage the guests to come here."

Maurice Darwish, owner of the Cove On Castro in San Francisco, told CNN affiliate KPIX the sudden fires and smoke has created just another issue for businesses to deal with.

"First we had to deal with the Covid and the shutdown," Darwish said. "Then all of a sudden, we've got fires and smoke. It's a very sad situation for everybody all around."