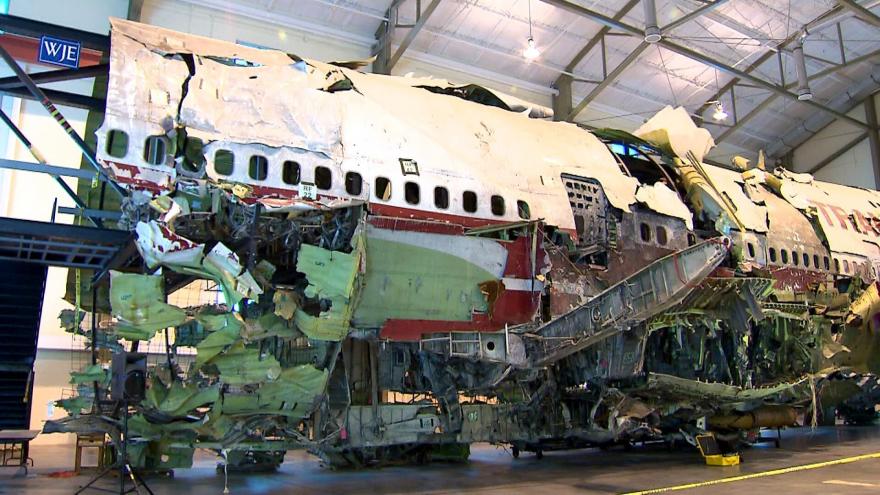 A private memorial service for the families of the victims of the 1996 TWA Flight 800 explosion is being held on Saturday, 25 years after the disaster that killed 230 people and just before the federal government begins destroying the reconstructed wreckage of the ill-fated aircraft.

(CNN) -- A private memorial service for the families of the victims of the 1996 TWA Flight 800 explosion is being held on Saturday, 25 years after the disaster that killed 230 people and just before the federal government begins destroying the reconstructed wreckage of the ill-fated aircraft.

The service will take place on Long Island, New York, more than 260 miles from the 30,000-square-foot hangar at the National Transportation Safety Board's training center in Ashburn, Virginia, where the reconstructed Boeing 747 wreckage has been for more than two decades. The agency, which had until last week been using the salvaged wreckage in accident investigation training courses, is set to decommission and destroy it in the coming months.

"It's been very useful, but I think we've gotten to the point now that it's time to move on from that, but in a different way," Frank Hilldrup, an NTSB official who was on the original team of Flight 800 investigators, told CNN.

The Paris-bound plane exploded minutes after taking off from New York's John F. Kennedy International Airport on July 17, 1996, killing all 230 people on board. The plane's wreckage fell into the waters of the Atlantic Ocean off the shores of Long Island. With help from the Navy as well as contracted fishing trawlers scouring the ocean floor, investigators were able to recover more than 95% of the aircraft, and, after almost a year, the remains of all who died were also recovered.

Following an exhaustive four-year investigation, Hilldrup's team determined that the probable cause of the explosion was an electrical short that detonated vapors in the center wing fuel tank, though they never definitively determined where the initial spark came from.

But while the NTSB plans to destroy the reconstructed wreckage by removing and either melting or shredding the nearly 1,600 pieces, some people close to the disaster say the process won't bring with it any closure.

Seaman, who says he visited the reconstruction only once, calls it a monument to those who found the truth behind Flight 800.

"It gives testimony to what happened," he told CNN. The reconstruction "was impressive and it made me feel good to be an American."

NTSB managing director Sharon Bryson similarly said that the impact of Flight 800 will continue long after the wreckage is destroyed.

This may not be "an investigation that you ever close the book on. It taught us too much and it changed too many things for the book to be closed, at least anytime soon," she told CNN.

The agency plans to thoroughly document the wreckage over several months using 3D scanning techniques, and the data will be archived for historical purposes before it's finally destroyed.

The tragedy prompted one of the largest and most expensive aviation investigations in history, setting off a flurry of conspiracy theories and suspicion that terrorists had hit the plane with a rocket.

Of the 755 witness reports that the FBI has made public, accounts vary widely but hundreds describe what they thought was either a flare or fireworks heading up toward the plane before it exploded. A few witnesses even used the words "missile" or "rocket."

"When you talk about airplane break-up -- was it a bomb? Was it a missile? Well, you can see the evidence," said Peter Goelz, who was serving as the NTSB's managing director at the time of the Flight 800 disaster.

Though the agency eventually deemed the explosion an accident and found no evidence of foul play, investigators had also considered state-sponsored actors during their probe, according to Leon Panetta, who was chief of staff for President Bill Clinton at the time of the tragedy.

"The investigation was looking at almost every possibility, including state actors, because we'd known that Libya had been involved with regards to bringing down the airliner over Scotland," he previously said, referring to Pan Am Flight 103. "We were looking at Iraq and Saddam Hussein. We were looking at, you know, the possibility of even Iran might have played a role in this."

NTSB said the original agreement with the families of those who died in the crash included a stipulation that the reconstruction would be used solely as a training tool and never as a public exhibit, and Bryson said families had been notified about the decommissioning prior to the agency's public announcement.