25,000 educators swarmed City Hall with their demands in day 5 of the Chicago teachers' strike 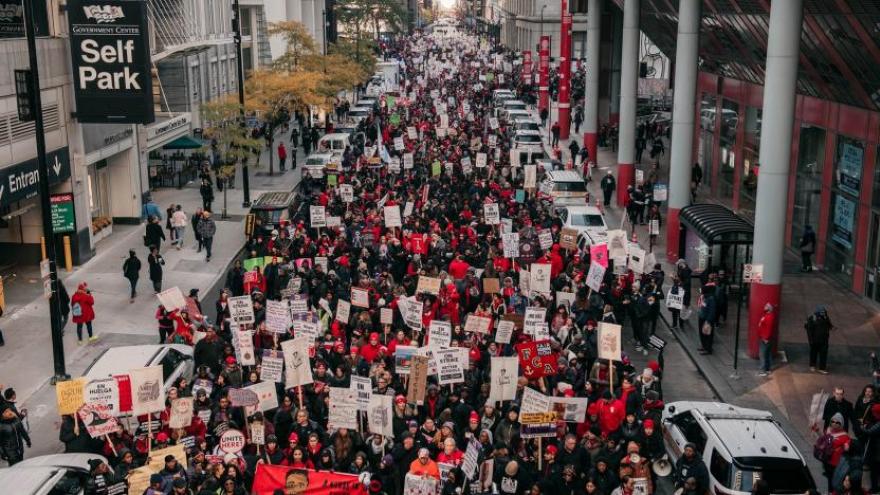 About 25,000 members of the Chicago Teachers Union rallied on October 23, 2019, as Mayor Lori Lightfoot delivered her address on the city's budget.

(CNN) -- Thousands of teachers flooded the streets of downtown Chicago to deliver a message to City Hall: They won't stop striking until they get what they want.

About 25,000 members of the Chicago Teachers Union rallied Wednesday as Mayor Lori Lightfoot delivered her address on the city's budget.

The city insists "there is no more money" to offer the union, but teachers say they won't back down until they get more support staff, higher raises and class-size limits in the country's third biggest school district.

See what the teachers' union wants

"We're willing to strike until we get the job done," CTU President Jesse Sharkey said. "We are not giving up this fight until we get what is just and what is right."

As the adults bicker, 300,000 students are missing a fifth day of classes Wednesday. Some students are playing board games or making origami instead of learning in class.

Now, some parents are torn about which side to support.

"I support both sides, but I think they need to come to a mutual agreement and give a little on both sides because they're only hurting the kids," said Dominique Williams, the mother of two daughters in high school.

The city has offered some concessions to the union, but said it can't afford to meet all their demands.

So Wednesday's showdown at City Hall could mark a turning point in the strike.

A senior city official with direct knowledge of the negotiations told CNN the progress was slow but "incremental."

The official said if both sides can nail down two major issues of class sizes and staffing, the strike will be over "quickly."

"We will remain at the table until we get a settlement," she said.

Students will miss classes for the sixth day on Thursday. The strike started last Thursday.

'Things are just getting more and more chaotic'

One of the greatest needs is for more social workers in schools. That's especially true in Chicago, where many students struggle with poverty, violence and grief at a very young age.

"Everything is so different from the way it used to be. It seems like things are just getting more and more chaotic as the years go by," said Williams, the mother of two on the city's tough west side.

One school social worker said she has to split her time between four buildings and 1,039 students.

"I'm tired of telling kids that I can only be there 1 1/2 days of the entire week," she said. "We can't plan our crises according to when I'm there."

Darian Martyniuk, the father of two elementary school students, said he appreciates what the teachers are fighting for. But they may be asking too much from Chicago Public Schools.

"While I think the teachers have some noble and worthy demands that need to be addressed, I think the union leadership is at best behaving cynically, at worst using whatever leverage they think they have to squeeze the most out of a system that doesn't have anything left to give," Martyniuk said.

"Additional staffing like librarians, nurses, counselors ... there are legitimate teacher needs for more. But the union leadership doesn't seem to understand the finance structure of CPS and how it is a limited pool of money. You can't just keep raising taxes year after year because legally they can't do that."

Mayor Lori Lightfoot said she and the union want some of the same improvements for students -- but it's time for the union to stop striking.

"There is a finite pot of money. We don't have unlimited cash to keep funding the things that are aspirational and maybe things that, on values that we share," Lightfoot said.

"We have to live within our means. That's what the taxpayers expect of us, and that's what we're going to do."

See what Chicago Public Schools has offered the teachers

Williams says both sides need to resolve their differences quickly.

"I'm pissed at the fact that the kids have been out for so long," she said. "They need their class time."