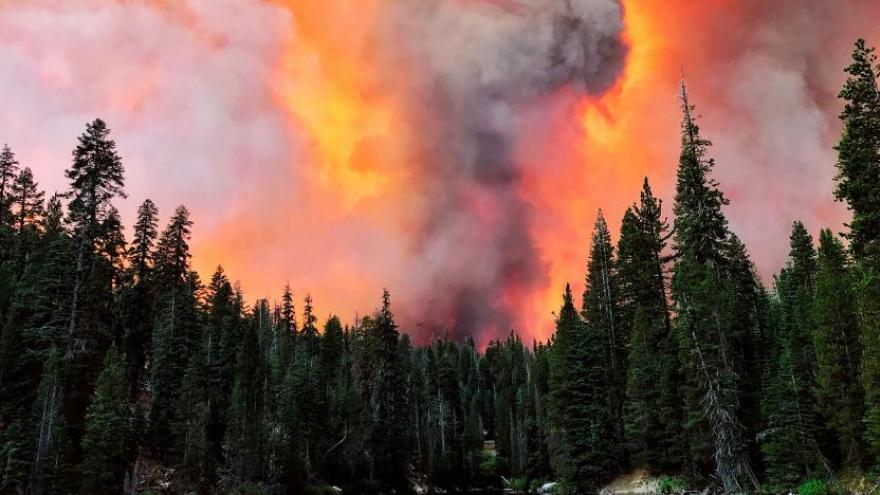 The Creek Fire engulfed parts of the Sierra National Forest on Saturday.

(CNN) -- California's atrocious year for wildfires just became the worst in state history as far as the amount of land scorched. And it's only September.

More than 2,094,955 acres have burned across the state this year, CAL FIRE Capt. Richard Cordova said Sunday. That's the size of more than 10 New York Cities.

"This is crazy. We haven't even got into the October and November fire season, and we've broken the all-time record," Cordova said.

"It concerns us because we need to get these firefighters off these lines and get them breaks from battling these wildfires."

But firefighters will get no respite from the searing heat as they battle the fast-moving Creek Fire, which is tearing through the Sierra National Forest in California's Central Valley.

At least 224 people were rescued from the Mammoth Pool Reservoir area after the Creek Fire blocked the only road out of the popular recreation site, Madera County Sheriff Tyson Pogue said.

About 20 evacuees had injuries ranging from broken bones to burns. Two people had to be carried on a stretcher, Pogue said.

"The situation only can be described as just hellish conditions out there for those poor people," Pogue said.

Juliana Park was outside the Mammoth Pool Reservoir area when she had to flee in a car surrounded by flames. She posted video of the harrowing escape.

"A backpacking trip cut short by unforeseen thunder, ash rain, and having to drive through literal fire to evacuate #SierraNationalForest in time," Park tweeted. "Grateful to the SNF ranger who led us down... wish we ... got her name."

But the danger is far from over, as the Creek Fire is 0% contained as of Sunday.

The Fresno County Sheriff's Office ordered everyone in the community of Shaver Lake to leave immediately Sunday.

"There is an imminent threat to life and property due to the fast moving Creek Fire," the sheriff's office said.

The inferno quickly exploded in size since it started Friday evening in the Sierra National Forest, US Forest Service spokesman Dan Tune said.

It started in the forest south of Yosemite National Park and grew to 36,000 acres in just one day. By Sunday morning, the wildfire had engulfed 45,000 acres. The cause of the blaze is under investigation.

On Saturday, campers at the lake were asked to shelter in place after the Creek Fire blocked the only way out of the area. The group at the lake received the warning from a helicopter's public address system.

"Fire runs uphill, as does the road out," Tune said. "We did not want to put campers attempting to caravan through an area where fire is likely."

By Sunday morning, Pogue said he believed everyone had been rescued from the Mammoth Pool area. But officials plan to keep looking Sunday for others who might be stranded in the remote wilderness.

About 450 firefighters are battling the blaze, along with three helicopters and three air tankers, according to the Forest Service.

The conditions have made firefighting exceptionally challenging. There have been a few instances of limited visibility due to the smoke, but firefighters have been able to battle the blaze from the air, Tune said.

"The column on a fire like this can be quite dangerous," he said. "So the aircraft has had to back off for a time, and go back again once conditions change."

Another major challenge: the blistering heat in California this holiday weekend.

The National Weather Service issued an excessive heat warning for the region, with high temperatures ranging from 107 to 112 degrees slated to last until Monday night.

On top of that, "this is in a river canyon, so in the afternoon you get up-canyon winds," Tune said. Sustained wind speeds are about 10 to 15 miles per hour.

California is grappling with a relentless series of wildfires this summer, including many sparked by lightning.

Meanwhile, some San Bernardino communities are being told to evacuate because of the El Dorado Fire, which has burned through 3,010 acres since it began Saturday morning.

"Due to very dry vegetation, very steep terrain and very hot weather, the fire has been extremely active," San Bernardino National Forest said in a news release. "Today is the peak day of heat over the Labor Day weekend."

An evacuation order has been issued for the Oak Glen, Mountain Home Village, Forest Falls and North Bench Yucaipa communities. The human-caused fire is under investigation, according to the San Bernardino National Forest.