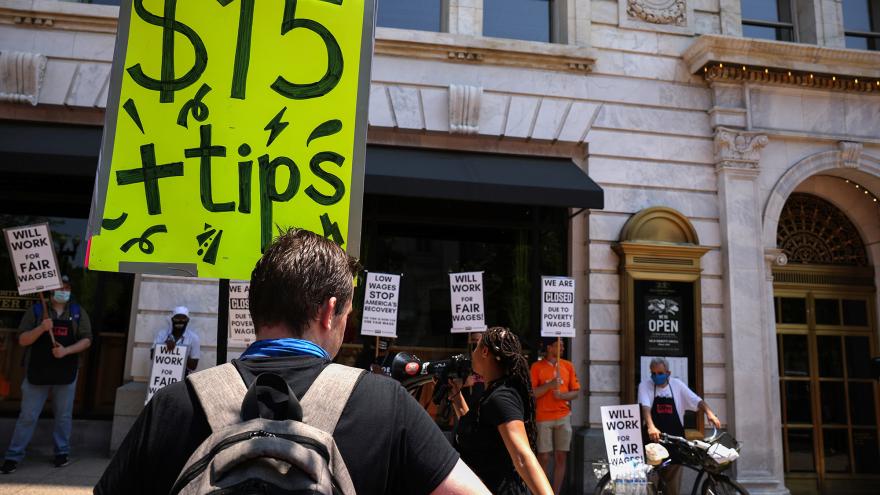 (CNN) -- Workers in 21 states will see a rise in the minimum wage in the new year.

As 2022 begins, some states will enact pay bumps ranging from cents to dollars per hour.

Many of the increases will go into effect on Saturday, but New York's is set to begin on Friday.

In New York and seven other states, the increases are part of scheduled raises in efforts to reach $15 minimum wages in the years to come. The additional states are California, Delaware, Illinois, Maryland, Massachusetts, New Jersey and Rhode Island, according to a report from payroll experts at Wolters Kluwer Legal & Regulatory US, a company that provides finance, compliance and regulatory information.

States also increased rates because of previously approved legislation or ballot initiatives, and other state-mandated wage increases -- in places like Arizona, Colorado, Maine, Minnesota, Montana, Ohio, South Dakota, Vermont and Washington -- are due to automatic cost-of-living adjustments that are based on inflation.

Connecticut, Oregon, Florida and Nevada will also see minimum wage increases, which go into effect later in the new year.

The federal minimum wage will remain at $7.25, a rate that hasn't moved since it began in 2009. The nearly 13-year period is the longest American workers have ever gone without a federally mandated bump in wages.

President Joe Biden and some progressive Democrats have previously advocated for a $15 federal minimum wage. By signing an executive order in April, Biden raised the minimum wage for federal contractors to $15. That increase will go into effect at the end of January.

However, attempts to bring a nationwide federal increase to fruition failed last February when the Senate parliamentarian ruled against including an increase in the minimum wage in the Covid relief bill. Independent Sen. Bernie Sanders of Vermont introduced an amendment in March to try to have the minimum wage increase included, following the Senate parliamentarian's ruling. While its chances of passage were already slim given the narrowly divided Senate, eight Democrats voted against the amendment.

Sen. Joe Manchin of West Virginia, one of the Democrats who voted against the amendment, told CNN's Jake Tapper at the time that he'd like to see the federal minimum wage increased to $11 and then "it should be indexed for inflation, so it never becomes a political football again." Others who criticize raising the federal minimum wage argue that if employers must pay their workers $15 an hour, they'll hire fewer workers -- resulting in fewer jobs.

Advocates like Biden argue that a $15 wage would get "people above the poverty line." The Congressional Budget Office estimated in 2019 that a $15 minimum wage "would move, on net, roughly 1.3 million people out of poverty."

While federal legislation has been stagnant, some private companies have taken it upon themselves to increase their minimum wages. In September, Walmart raised its minimum wage to $12 per hour and Amazon hiked its average starting rate to $18.

In addition to the 21 states, individual cities and counties are implementing pay increases. Thirty-five cities and counties will see higher wages in the new year, according to the National Employment Law Project. In New York state, the $15 minimum wage applies only to certain places, including New York City, Long Island and Westchester County. And while Maryland is increasing its minimum wage to $12.50, Montgomery County, near Washington, DC, has already implemented a $15 minimum wage.