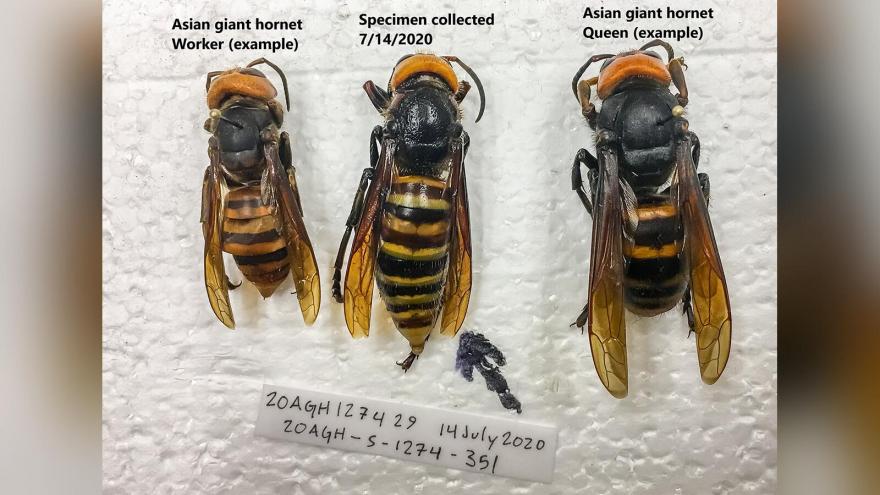 Murder Hornets are pictured by the Washington State Department of Agriculture.

(CNN) -- In biblical terms of awfulness, 2020 ticked every box: There was war. There was famine. Above all, there was pestilence.

And there were scary bugs.

There were so, so many scary bugs. Weird worms, poisonous caterpillars and all sorts of invasive whatnots added a little spice to our quotidian pandemic anxieties. And of course, hovering above it all, there were murder hornets.

Unfortunately, it's not over. In 2021, the largest brood of cicadas in the United States, appropriately named Brood X, will awake from a 17-year sleep and burrow out of the cold earth, ushering in a new season of baroque bug horrors.

Before that particular nightmare (literally) bursts forth, take a look back at the year in scary bugs.

Ah yes, two of the worst words, back to back. Murder hornets, also known as Asian giant hornets, made quite the entrance in May, when they were spotted in the United States for the first time, in Washington state. How did scary bug scientists know they were dealing with this specific pack of invasive flying nightmares? The decapitated bee carcasses were a big clue. Asian giant hornets can get up to two inches long, and can kill a person with multiple stings. The name certainly fits, and these suckers stuck around for most of the year, haunting the spaces of our minds not already occupied with the other horrors of the day. Luckily, it looks like murder hornets take a little break from being evil in the winter, so we have a respite before they rear their murderous heads once more.

Horror movies have nothing on Massospora, a psychedelic fungus that invaded the bodies of cicadas in West Virginia in June, turning its hosts into unthinking, sex-crazed fungal zombies. The fungus burrows into the cicada through an orifice (any orifice) and slowly takes over, eating away at healthy tissue and replacing it with fungal matter. As the fungus controls the bug's brain, it gets the uncontrollable urge to mate, which helps the fungus spread. Perhaps the worst part is the cicadas are still fully functional during this hostile spread, and they show no indication of knowing they've been taken over -- until it's too late.

In August, residents in some New Jersey counties got a double dose of quarantine when they were asked to protect themselves from an onslaught of spotted lanternflies. While they don't have a propensity for bloodshed, these big insects still look pretty metal. Their black-and-white spotted wings cover bright red bodies, and their sin of choice is endangering indigenous flora and fauna. They are also "an excellent hitchhiker," according to the New Jersey Department of Agriculture.

When doctors examined the brain of an Australian woman who had suffered persistent headaches for years, they thought they found a tumor. But upon removing it, they found out it was actually a cyst full of tapeworm larvae. A CYST FULL OF TAPEWORM LARVAE. Usually, someone has to swallow eggs found in the feces of a person who has an intestinal tapeworm to end up in such a state. But in a report released in September, doctors said the woman never left the country and they have no idea how the worms got up there. The condition is called neurocysticercosis, and happens more often than is comfortable. This isn't even the only time it's been reported this year! Information about a man who was treated for the same malady was released in January. Congratulations, you've unlocked a new fear!

Behold, the fluffiest and most evil caterpillar to ever slink the earth. In October, multiple sightings of the puss caterpillar were reported in Virginia, prompting the state's Department of Forestry to warn against petting, or even approaching the creatures. Their brown fur is oozing with venom, and just brushing up against one can cause an itchy rash, vomiting, swollen glands, fever and, according to one resident who was stung, "pain like a scorching-hot knife." The caterpillars are native to areas in the far South and Midwest, so experts were pretty puzzled when they reared their furry heads in Virginia.

Nothing good comes from the phrase "hammerhead worm." Numerous sightings of the "shovel-headed garden worm" (its other, equally discomfiting name) were reported in Georgia around November. They get their names because of the Lovecraftian little half-moon they have for heads. Well -- sort of a head. The mouth is really halfway down their bodies. Anyway, not only are they very ugly and snakelike, these babies are also poisonous! Hammerhead worms produce tetrodotoxin, the same deadly neurotoxin produced by pufferfish. Scientists don't know much about how it uses the toxin (probably to help it catch its food -- other worms!) or how much it would need to produce to hurt a human, bu they advise staying far away. And if you do see one and get the very understandable urge to hack it to pieces, don't! They can reproduce from cut sections of their bodies, like a real-life hydra.

And so, we come to the future of our scary bug world. In all honesty, cicadas aren't that scary. They are, however, very loud, and if too many get underfoot during a heavy season, quite crunchy. Brood X is the largest and widest-ranging of the 15 cicada cycles that invade the United States every so often, and areas in the mid-Atlantic will be blanketed with the things come spring. You see, cicadas have a pretty nifty way of avoiding predators: They just come out en masse. Even though they're out there for the eating, cicada broods are so large that predators literally can't get to them all. The bugs buzz around for a few weeks, and then lay their eggs in the ground before dying off. When they're gone, a new generation of cicadas remains, growing, waiting, just below our feet.

Author's note: This same cicada brood took over the Washington, DC, area when I was in high school. In the cafeteria one day, a boy in my class looked me dead in the eye from across the room and opened his mouth to reveal a whole cicada on his tongue.

Reader, he ate it.