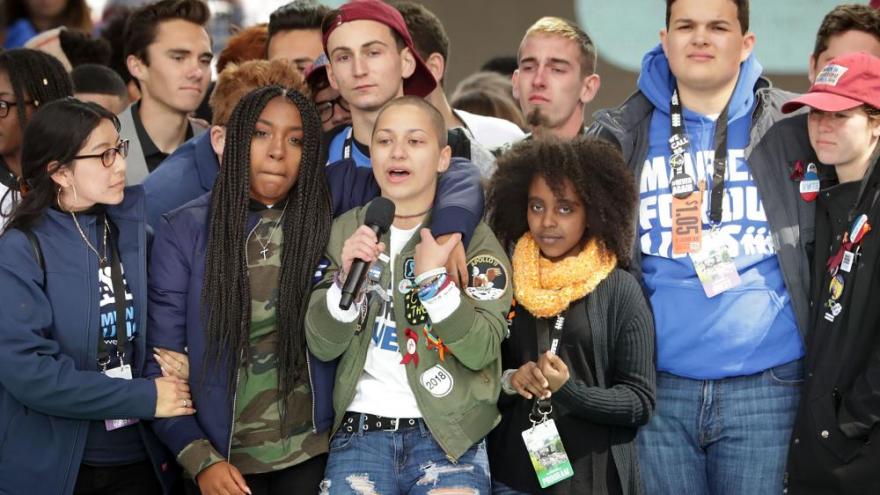 Students from Marjory Stoneman Douglas High School, including Emma Gonzalez, stand together on stage with other young victims of gun violence at the conclusion of the March for Our Lives rally on March 24, 2018, in Washington, DC.

(CNN) -- Polling data ?and high levels of voter engagement indicate 2020 may bring out a wave of young voters, experts say.

"There are a number of things that tell me it will be a high turnout year," Kei Kawashima Ginsberg, the director of the Center for Information & Research on Civic Learning and Engagement at Tufts (CIRCLE), told CNN.

"There are so many more voters who have a previous vote history," she said, noting members of Gen Z who voted for the first time in the 2018 midterm elections. "That combined with campaign outreach really gives a huge cadre of young people who have been reached out to and are active and are reaching out to other young people."

A pre-election analysis from CIRCLE found that there are 6.8 million more young people with a history of voting in 2020 than there were in 2016.

As of Friday, more than 1.2 million voters age 18-21 had already cast votes in 39 states reporting, according to Catalist, a company that provides data, analytics and other services to Democrats, academics and nonprofit issue-advocacy organizations and is giving new insights into who is voting before November.

Kawashima Ginsberg also mentioned the number of young people, who may not have been eligible to vote in the last presidential election, but have taken to the streets to make their voices heard since 2016. While she noted there's a stereotype that some young people fed up with electoral politics will protest but not vote, CIRCLE has not yet found that to be true. In 2019, CIRCLE wrote that the March For Our Lives, the massive gun violence prevention demonstration that followed the high school shooting in Parkland, Florida, "fueled youth engagement in the 2018 election."

And ahead of the 2020 election, according to CIRCLE, 83% of 18- to 24-year-olds say they believe young people have the power to change the country and 79% say that the Covid-19 pandemic has helped them realize politics affects their daily lives.

Kawashima Ginsberg predicts that the empowerment of young people could lead to a spike in youth voter turnout, but noted that in order for that to be the case, the groups need to organize around shared messaging.

"I hear them talking a lot about how racism is an intersectional issue, and there seems to be really strong commitment to address that, so I can see, it could be a moment that is ripe for them," Kawashima Ginsberg said.

Likewise, a preview of the Harvard Institute of Politics Fall 2020 Youth Poll found that 63% of young Americans say they will "definitely" vote in November as compared to the 47% who said the same in 2016. Overall, the results of Harvard's survey project the highest youth voter turnout in 12 years.

Chip Meyers, a 21-year-old man from Arkansas, will be voting for the first time this November. While Meyers is a Republican, he is voting for Biden, he told CNN.

"I expect young voters to vote at all-time high rates," Meyers added, noting that young voters are "increasingly affected by political issues such as healthcare, LGBT rights, and immigration."

Likewise, Lilya Vanderaar, a 20-year-old woman from Pennsylvania, will be casting her first ballot. While Vanderaar considers herself to be a moderate Republican, she will be voting for Biden as well, citing "climate change and morality of the candidate" as the key issues motivating her vote.

"I think youth voter turnout will be high, since from my observation there has been a lot of advocacy in favor of voting on social media," Vanderaar said.

According to Ben Wessel, executive director of NextGen America, he has never before seen such excitement from young voters before this election cycle.

NextGen America, the youth-oriented, progressive nonprofit founded by businessman Tom Steyer in 2013, has deployed over 17,000 volunteers in 11 battleground states to engage with, register, and mobilize young people ahead of the 2020 election, according to the organization.

"People understand more about the differences in candidates and understand the nitty gritty of casting a ballot [more] than we've ever seen before. In my mind -- all signs that point to people who are more fired up to vote and participate," Wessel told CNN.

Both Kawashima Ginsberg and Wessel pointed to a number of reasons why young Americans may be more motivated to turn out in 2020 than in recent past election cycles, including the unprecedented national moment where the Covid-19 pandemic is intersecting with a nationwide racial reckoning, economic distress, a failing climate and political vitriol.

Young Americans were one of the demographics hardest hit by job losses, according to Pew Research Center, as one in four Americans ages 16 to 24 lost jobs between February and May. According to Harvard's Fall 2020 survey, young voters are more concerned with the economy now than they were last spring. While in the spring, 6% of young voters listed the economy as their top issue, the state of the economy jumped to the top of young voters' concerns, with 23% listing it as their most important issue this fall.

Dan Glickman, a vice president of the Aspen Institute, believes young people will turn out in part because of their current economic situation.

"There's a lot of negative ads, hostile ads, everything else turns a lot of younger people off, but it's still underlying all of this as the issue of employment and jobs and jobs, the future of economic opportunity," Glickman -- a former head of the Institute of Politics at Harvard, as well as a former Clinton administration official and Democratic congressman -- told CNN.

Glickman noted that the current economic situation may push young voters to the left because of dissatisfaction with the current status quo.

But across party lines, young voters cite economic distress as a motivating factor.

Connor Land, a 21-year-old senior at Georgia Tech, served as an intern for the Trump campaign in Atlanta this summer.

Land said he's seen high energy from young people on campus, where he serves as a chapter leader for Students for Trump, which is not affiliated with the Trump campaign.

Land said that while he tables for the group on campus, "everybody that passes by is talking about when they're voting and if they're voting." He added that the economic concerns are motivating voters he meets.

"I truly believe this is the most important election of our lifetime," Land said. "People are super stoked to go vote for another four years for President Trump," he said.

One reason Kawashima Ginsberg of CIRCLE believes there could be an uptick in youth voter turnout this November is that there are more young voters with a history of voting in 2020 than in recent election years.

The young voters who voted for the first time in 2018 are now on the voter rolls that campaigns use to reach out to likely voters. According to CIRCLE, when voters are contacted by campaigns, they're more likely to vote.

"The only reason they can see you is because you are on record as a voter," Kawashima Ginsberg said. "That number [of young voters on the record as a voter] has doubled compared to 2016 presidential campaign season, so that really added a huge pool of younger voters who were never visible to a lot of these groups."

In January, Glickman and Alan Solomont, the dean of Tisch College at Tufts University, wrote that young voters are going to be key to winning the 2020 election. Glickman and Solomont noted that both parties should seriously consider this "emerging part of the electorate," and encouraged Democrats and Republicans to seek out youth input and involve youth in their campaigns.

A number of campaigns have done so in the months since.

CIRCLE also found that young people are talking to each other about political issues and the election at high numbers both on social media and in person.

From TikTok campaigns to Instagram posts, voting is trending for young people on social media. Young celebrities and influencers are spreading the word about voting, while groups such as TikTok for Trump, with 14,300 followers, and TikTok for Biden, with more than 750,000 followers, on are popular on the app. And an Instagram Live between Kendall Jenner and Crooked Media founder Jon Favreau on National Voter Registration Day had more than 1.4 million views

"Normally, students are really indifferent about voting," Martin told CNN. "The common response is 'I'm too busy,' or 'I have an assignment due.' However, this year, with an increased commitment from the university, the mayor, and fellow student leaders, students are making it their mission to vote on campus/"

On top of polling data indicating the potential for a youth wave this November, voter registration numbers and get-out-the-vote engagement have been high this fall.

On National Voter Registration Day alone, youth focused organizations including Rock the Vote, NextGen America and When We All Vote and companies such as Snapchat broke records with their voter engagement initiatives.

For its part, Snapchat has registered more than 1.2 million voters this year through its in-app voter registration portal. The social media platform popular among young Americans is providing its users with a voter guide featuring resources about where and how to vote.

And NextGen America has registered more than 106,000 voters ahead of 2020 and is also helping young voters get their mail-in ballots. So far, NextGen says they've had more than 138,000 requests for ballots. On top of that, the organization says it has more than 18,000 volunteers mobilized across the country, texting and calling young voters and posting about what's at stake across social media.

In this moment, young people are personally affected by politics on a daily basis, Wessel said, sharing that whether it's their jobs, education, personal health or the health of their parents, young people are in tune with what's currently on the political table.