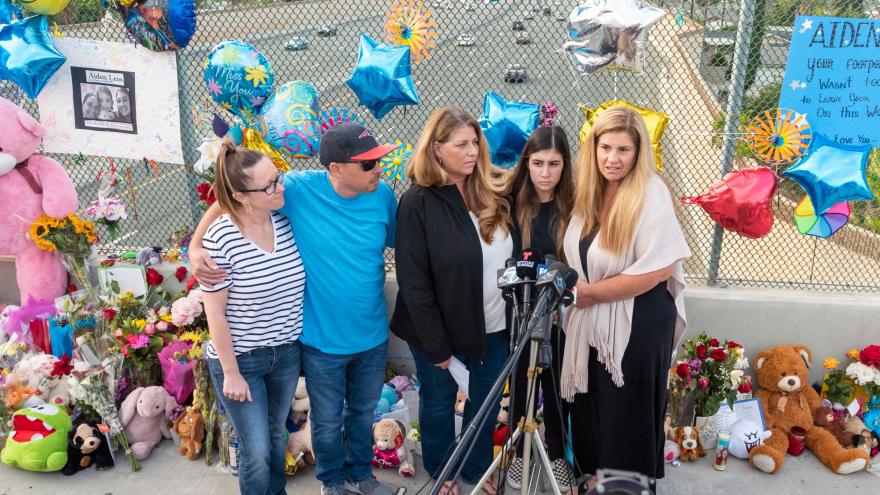 (CNN) -- A reward for information leading authorities to the person responsible for killing a 6-year-old boy in a suspected road rage shooting in California last week has risen to $200,000, the boy's family said Tuesday.

The reward is for the arrest and conviction of whoever killed Aiden Leos on State Route 55, known as the 55 Freeway, in Orange County on Friday morning, his family said during a briefing.

Aiden was sitting in a booster seat in the back of a car that his mother was driving north on State Route 55 when he was shot, CHP Officer Florentino Olivera said at a news conference on Friday. The boy was taken to a hospital, where he was pronounced dead, Olivera said.

The boy was on his way to school with his mother when the shooting happened, according to CNN affiliate KABC.

Authorities were looking for a white sedan and asking for the public's help in locating it. Olivera said police are interested in talking to anyone who was driving north on State Route 55 between Chapman Avenue and State Route 22 from 7:55 to 8:15 a.m., especially if their car has a dashboard camera.

The shooting was believed to be unrelated to a recent string of pellet and BB gun shootings in Riverside, Orange and Los Angeles counties, Olivera said Friday.

The CHP said the shooting was believed to be a road rage incident. Investigators, however, didn't immediately know precisely what led to the shooting, Olivera said.