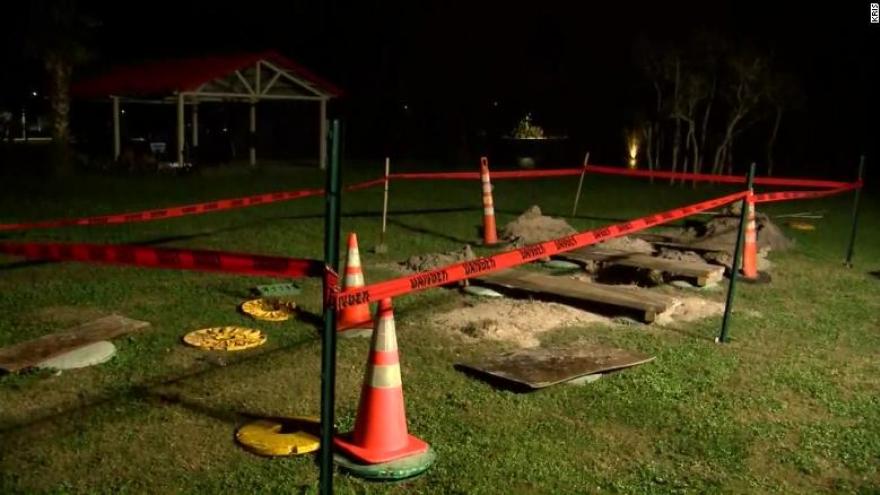 (CNN) -- A 2-year-old girl fell into a septic tank at a Texas recreational vehicle park Wednesday evening, spurring a frantic but unsuccessful effort to rescue her, authorities said.

The Rockport Volunteer Fire Department said firefighters were dispatched to Paradise Lagoons RV park in Aransas Pass, Texas, around 5:30 p.m. for a child who had fallen into a septic tank.

Firefighters found the girl in the water about 15 feet below ground, the department said in a statement. Bystanders in the park had tried and failed to rescue the child, and emergency crews made several urgent attempts to get to her as well, assisted by civilians using shovels and backhoes, the department said. The city of Rockport also used heavy equipment to try to assist emergency crews.

About an hour after emergency crews arrived, a firefighter was lowered into the tank and reached the child with assistance from the Ingleside Volunteer Fire Department's specialized rope rescue team, the Rockport Fire Department said.

The girl had been underwater for a significant period of time, the department said, and had died by the time firefighters removed her from the septic tank.

The family identified the girl as 2-year-old Charleigh Nicole Nelson, according to CNN affiliate KRIS.

"This is a terrible tragedy for the family of this child, her neighbors who witnessed the event, and all of the 1st responders who assisted in the recovery," said Rockport Volunteer Fire Department spokeswoman Gillian Cox. "Although an unbelievably heartbreaking outcome, we wish to recognize there was an amazing team effort with the coordination of recovery by all first responding agencies including the Aransas County dispatchers and the nearby civilians who responded to assist."