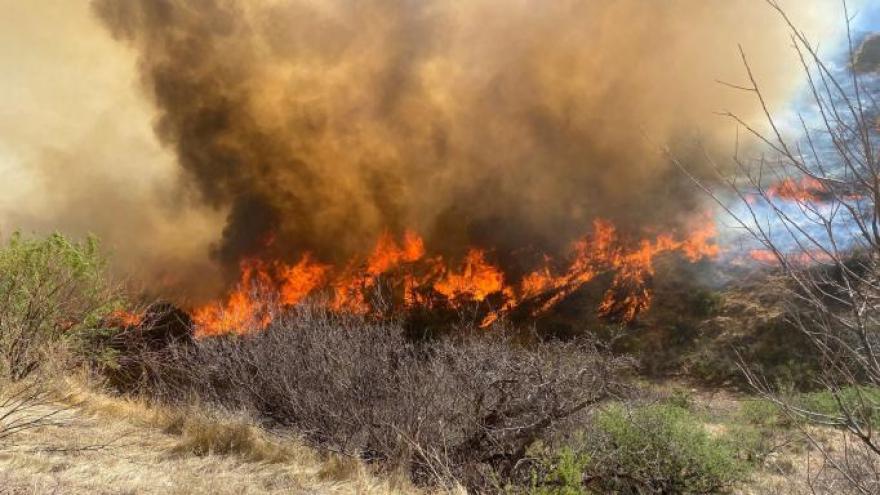 (CNN) -- Two wildfires burning Sunday in the hills and mountains of eastern Arizona have scorched more than 60,000 acres and prompted evacuation orders for hundreds of people, officials said.

One -- the Telegraph Fire -- has burned more than 34,300 acres in and near the southern edge of Tonto National Forest, some 60 miles east of Phoenix, since starting Friday afternoon, officials wrote on the national InciWeb wildfire information system.

An evacuation has been ordered for residents in the area of Top-of-the-World, a community of about 250 people, the Pinal County Sheriff's Office said Sunday morning.

"If you choose to ignore this advisement, you must understand emergency services may not be able to assist you further," the office said on Twitter.

The fire was burning a few miles south of Superior, a town of about 3,000 people. Residents there should be ready to evacuate, officials said.

The other blaze -- the Mescal Fire -- has burned more than 25,900 acres in the Mescal Mountains roughly 120 miles east of Phoenix as of Sunday morning, according to InciWeb. The fire started early last week.

On Saturday, that fire moved authorities to evacuate people on the east side of State Route 77 near El Capitan as well as the Soda Canyon area near San Carlos Lake, according to InciWeb.

El Capitan is an area with about 4,800 residents. It wasn't immediately clear how many people or homes were evacuated.

Part of the fire is on land of the San Carlos Apache Reservation. Evacuation orders included the area of San Carlos High School, according to the tribal emergency response commission; the school is on the reservation.

No deaths or injuries have been reported in either fire, and the causes of both are under investigation.

Winds and dry conditions -- such as dry grass and shrubs, as well as pine in the higher elevations -- have helped drive the fires, officials said.