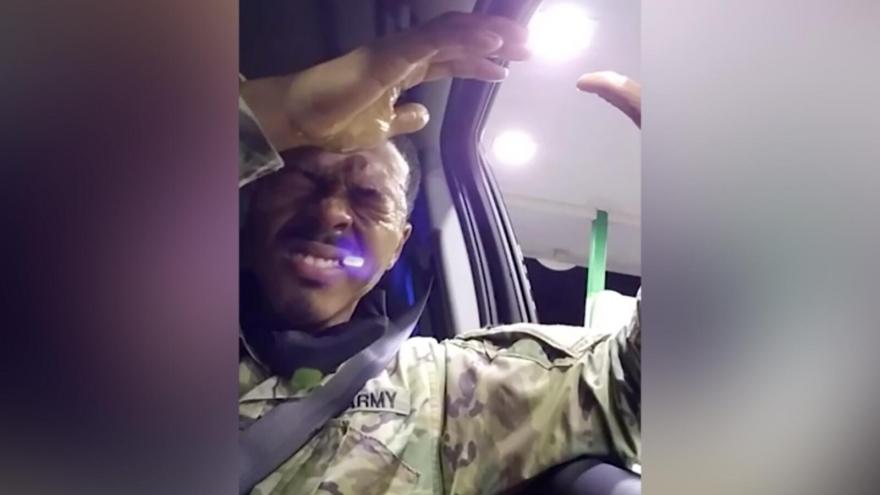 Caron Nazario, a US Army officer, is suing two Virginia police officers after they pointed guns at him, pepper sprayed him and pushed him to the ground during a traffic stop last December for what the officers believed was a missing license plate on his new SUV.

(CNN) -- A US Army officer is suing two Virginia police officers after they pointed guns at him, pepper sprayed him and pushed him to the ground during a traffic stop last December for what the officers believed was a missing license plate on his new SUV.

The lawsuit by 2nd Lt. Caron Nazario, who is Black and Latino, is seeking $1 million in compensatory damages, claiming two Windsor, Virginia, police officers violated his rights guaranteed under the First and Fourth Amendments.

CNN has tried unsuccessfully to reach the officers, Joe Gutierrez and Daniel Crocker, for comment. It's unclear if they have legal representation who would comment on their behalf. CNN has also reached out to Windsor Police Chief Rodney Riddle and Windsor town leaders for comment.

Late Sunday evening, Town Manager William Saunders confirmed to CNN that Gutierrez had been fired following an investigation into the incident launched because of the use of force.

"At the conclusion of this investigation, it was determined that Windsor Police Department policy was not followed. This resulted in disciplinary action, and department-wide requirements for additional training were implemented beginning in January and continue up to the present. Since that time, Officer Gutierrez was also terminated from his employment," a statement released by the town Sunday said.

Crocker is still employed by the police department, Saunders confirmed to CNN.

Footage of the incident has drawn condemnation from many, including Virginia Gov. Ralph Northam, who called the it "disturbing." He said he was "directing the Virginia State Police to conduct an independent investigation."

"Our Commonwealth has done important work on police reform," Northam said on Twitter Sunday, "but we must keep working to ensure that Virginians are safe during interactions with police, the enforcement of laws is fair and equitable and people are held accountable."

The encounter was captured by several cameras, including both officers' body cameras and Nazario's phone. The footage and the lawsuit were obtained by CNN through Nazario's attorney.

"I'm honestly afraid to get out," Nazario is heard telling the officers after they've approached the vehicle with weapons drawn and order him to exit the vehicle.

"Yeah," Gutierrez says, "you should be."

Driver repeatedly asked police why he was pulled over

Nazario, who was in uniform, was driving a new Chevrolet Tahoe on December 5, 2020, when he was pulled over, the lawsuit says. The vehicle was new enough that Nazario did not have permanent license plates, it says, but he had "cardboard temporary plates" taped to the inside of the rear window.

According to the police reports provided as exhibits to the lawsuit, Crocker turned on his patrol vehicle's lights and sirens to initiate a traffic stop at 6:34 p.m.for a black SUV "with dark tinted windows" and no license plate.

The lawsuit said the license plate is visible in the bodycam video at three separate times. In his police report, Crocker acknowledged seeing the plate later in the altercation.

Nazario's vehicle continued westbound at "a low rate of speed," Crocker wrote in the report, adding that the driver had "disregarded" his lights and sirens. "I was unable to see inside of the vehicle due to the window tint on all the windows," Crocker wrote.

Gutierrez, in his own police vehicle headed eastbound, turned around, the police reports say, getting behind Crocker's vehicle and turning on his lights and sirens as well.

The SUV stopped at a BP gas station in Windsor, about 30 miles west of Norfolk. The lawsuit says Nazario wanted to stop in a safe, well-lit place. By the time he stopped, he had gone less than a mile and one minute and 40 seconds had passed since Crocker activated his lights and siren, according to the lawsuit.

Body camera footage shows the officers exit their vehicles, unholster their guns and point them at the SUV. Gutierrez wrote the officers decided to conduct "a high risk traffic stop," citing the lack of vehicle tag, the driver's delay in stopping and the vehicle's "extremely dark window tint."

Crocker orders Nazario to show his hands. Footage shows Nazario complying after he begins recording the incident on his cell phone, but the police reports say he initially refused. Crocker asks how many occupants are in the vehicle while Nazario asks, "What's going on?"

The officers again tell him to open the door and step out. "I'm not getting out of the vehicle," Nazario says. "What's going on?"

The officers approach the SUV, and Nazario says, "I'm serving this country, and this is how I'm treated?" Gutierrez responds that he is a veteran and "learned to obey."

Gutierrez is heard telling Nazario he was "fixin' to ride the lightning, son," which the lawsuit describes as a "colloquial expression for an execution," particularly in reference to the electric chair.

Body camera footage shows Gutierrez, gun drawn, unfastening the velcro around what may be his stun gun at the same moment he makes the statement. In his report, Gutierrez writes he switched from a firearm to the Taser at some point before using pepper spray on Nazario.

Nazario again asks, "What's going on? What did I do?"

"You received an order. Obey it," Gutierrez says. Nazario then replied he was afraid to and Gutierrez told him he should be.

Gutierrez then tells the lieutenant he was pulled over for a "traffic violation" and is being "detained" for "obstruction of justice" because he was not cooperating.

The bodycam footage shows Nazario with his hands up and outside the window as the officers try to open his door. Gutierrez's report said that when Crocker attempted to unlock the driver door and open it, Nazario hit his hand away. The lawsuit said this narrative is false based on the body camera video and despite knowing it was not true, Gutierrez included it in the report.

Gutierrez then tells Crocker to back away before pepper spraying Nazario four times, according to the lawsuit. He continues to yell at Nazario to take his seat belt off and get out of the car. Nazario says his dog is in the back of the vehicle "choking" from the pepper spray.

With his hands still in the air, Nazario tells the officers, "I'm reaching for my seat belt," before stepping out of the vehicle. The officers order him to the ground while Nazario continues to stand by the vehicle and ask what's happening.

"You made this way more difficult than it had to be if you'd just complied," Gutierrez is heard saying in the body camera footage.

In the footage, the officers wrestle Nazario to the ground and handcuff him while he repeatedly says, "This is f**ked up."

Paramedics arrive soon after to treat Nazario for the pepper spray. At Nazario's request, Crocker also opens the back window of the vehicle for the dog, who is in a crate in the back.

Bodycam footage shows Gutierrez telling Nazario he understood the lieutenant chose to continue driving before stopping at the gas station for safety reasons, and that it "happens all the time" and "80% of the time -- not always -- it's a minority."

The officers ultimately released Nazario without charges. But the lawsuit claims the officers "engaged in conduct in an attempt to extort" Nazario's silence by saying "in no uncertain terms" that unless he "were to remain silent" the officers would "charge him with multiple crimes" and "destroy his military career."

In the bodycam footage, Gutierrez is heard telling Nazario he had spoken with the police chief and had two options: the officers could either wait with him until he could drive home -- "go do your deployment, go continue serving my country" -- and release him without charges. Or they could "push the issue," write him a ticket for no license plate display and charge him with obstruction of justice.

"There's no need getting this on your record," Gutierrez is heard saying in the bodycam footage. "If you want to fight it and argue ... if that's what you want, we'll charge you, have you go to court, notify the commander, do all that," Gutierrez said.

In his report, Gutierrez wrote he chose to let Nazario go because he knew the military could take punitive action against Nazario.

"Being a military veteran I did not want to see his career ruined over one erroneous decision," Gutierrez says.

Taken together, Nazario's lawsuit says, the footage is indicative of a wider trend among police officers in the US.

"These cameras captured footage of behavior consistent with a disgusting nationwide trend of law enforcement officers, who, believing they can operate with complete impunity, engage in unprofessional, discourteous, racially biased, dangerous, and sometimes deadly abuses of authority, (including issuing unreasonable comply-or-die commands,) ignore the clearly established mandates of the Constitution of these United States and the state and local laws, and usurp the roles of legislator, judge, jury, and executioner; substituting the rule of law for their arbitrary and illegal conduct," the lawsuit said.

Virginia Attorney General Mark Herring called the incident "unacceptable" in a tweet Saturday. His office was monitoring the situation, Herring said, and he called on the Windsor Police Department to be "fully transparent."

"The video doesn't show anything to justify how Lt. Nazario was treated," he wrote.