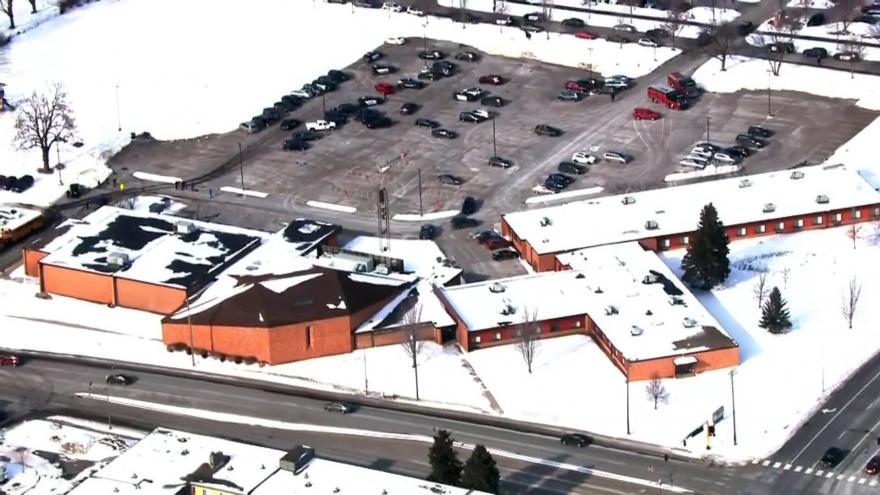 One student is dead and one injured after a shooting at a school in Richfield, Minnesota, officials announced Tuesday.

(CNN) -- Two suspects are in custody in connection with a shooting in Richfield, Minnesota, that left one teenage student dead and another critically injured, Police Chief Jay Henthorne said at a Wednesday news conference.

The shooting occurred Tuesday just after noon at the South Education Center, the chief announced. The suspects were arrested Tuesday evening, and investigators have recovered two handguns and are working to identify which was used, the chief said Wednesday.

Police announced Tuesday evening they had arrested the suspects. Alfredo Rosario Solis, 19, was being held in the Hennepin County Jail facing a murder charge without bail, jail records show. Fernando Valdez-Alvarez, 18, is also being held at the jail and facing a murder charge without bail. Henthorne said the suspects fled the shooting scene in a vehicle.

CNN has been unable to determine whether either suspect has obtained legal counsel.

The shooting was not random, the police chief said, adding the people involved were "self-education students."

"The five students did know each other," Henthorne said. "An altercation possibly related to a previous dispute took place, occurred between the five students near the front entrance of the high school. During the altercation, a handgun was produced and both juveniles were shot."

Richfield Mayor Maria Regan Gonzalez said the victim who died loved football, "loved to be with his friends and was respected and a part of our community."

"He should have had a lifetime of joy and happiness and growth ahead of him," the mayor said.

Police are consulting with the Hennepin County Attorney's Office on charges, which are expected to be announced by Thursday afternoon, the chief added.

"We are confident that with this isolated incident, no lingering threats exist to our community," the chief said.

Students were shot just outside a school

The chief said Tuesday that when officers arrived at the scene they found two students who had been shot on a sidewalk outside of the school. FBI Minneapolis special agents also responded to the shooting reports, the FBI said on Twitter. Special agents from St. Paul field division of the Bureau of Alcohol, Tobacco, Firearms and Explosives also responded, that agency said on Twitter.

"A young man lost his life yesterday, another is fighting for his life and countless others have lives that are changed forever based on the trauma and the fear evoked yesterday," Michael Paul, special agent in charge of the FBI Minneapolis field office, said Wednesday. "Shootings in and around our schools are a troubling reality in our country and Minnesota is not immune."

A message posted on the website of district 287 following the shooting said the South Education Center serves about 200 students from pre-K through age 21 in special education and alternative learning programs.

Superintendent Sandra Lewandowski said in a Tuesday statement posted on the website that the building was being evacuated and parents could pick up their students at a reunification site. The district was working to reunite all students with their families and secure all school buildings, the message added.

"There are no words to describe the bravery exhibited by our staff at SEC and local authorities today," Lewandowski said in a statement. "No one should ever have to respond to a tragedy like this and we commit to supporting staff, students, and family well-being as they recover from this incident."

"It is always difficult to understand an incident like this and it is an especially important time to reach out for support. District 287 stands ready to support our students and staff as needed as we recover from this tragedy," the superintendent's statement added.

On Wednesday, the superintendent said the South Education Center plans to reopen Friday to "welcome students back to the extent that they are ready to come back."

State AG: 'We must not accept any more death'

"As a dad, I know that hearing of a shooting by a school is a parent's greatest fear. Minnesotans deserve to know that when they send their kids to school, they will come home safely," the governor said. "We need more than words, though -- we need action. We need action to get guns off the streets and prevent violent crime in the first place. I remain committed to working with officials at all levels of government to seek needed change."

"We know that one young person will not come home to their family tonight. My heart breaks that a young life was lost as the result of gunfire," the governor added.

"My office & I will support law enforcement & prosecutors every way we can in solving this crime & holding accountable those responsible," Ellison said. "School shootings, mass shootings & gun violence happen far too often -- and we must never become numb or desensitized. We must hold our hearts open to all the outrage and hold our minds open to all the solutions for ending it. We must not accept any more death and lives torn apart."