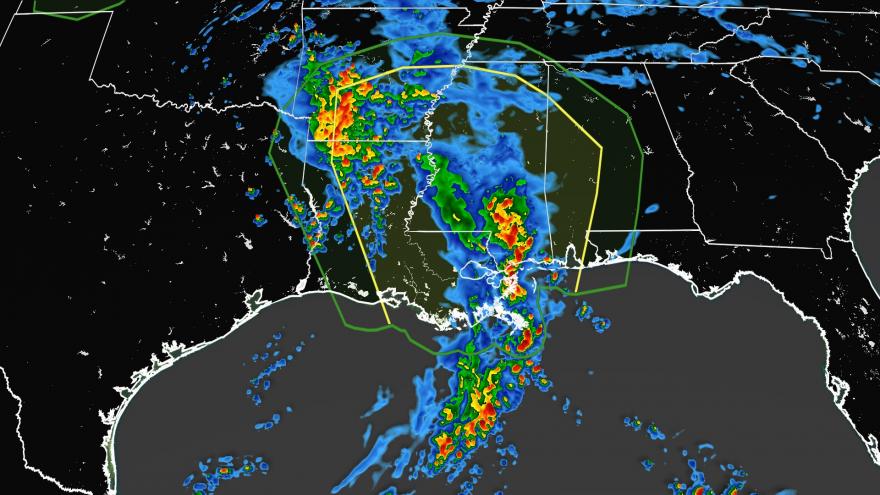 (CNN) -- Two separate storm systems -- one from the Gulf Coast region and the other coming from the Mountain West -- will threaten millions of people with severe weather Sunday and Monday.

The Gulf Coast system will arrive Sunday. More than 15 million people from Lake Charles, Louisiana to Pensacola, Florida, and northward to Memphis could experience damaging winds, hail and a few tornadoes.

"There will be a Slight Risk (level 2 of 5) of severe weather across south Mississippi and southeast Louisiana during the daytime hours on Sunday," the National Weather Service Office in New Orleans explains. "Damaging winds and large hail are the most significant threats, but a tornado or two cannot be ruled out."

Flash flooding will also be a concern, especially for areas of Texas and Louisiana that have been dealing with heavy rain for the past few days.

Check the weather in your area here >>

"The ground is already saturated in a lot of these areas, so it won't take much to initiate flash flooding," said Haley Brink, CNN Meteorologist. "In fact, some areas of Texas have picked up over 4 inches of rain in just the last 48 hours."

A second system will be sliding through the Mountain West and Central Plains on Sunday.

"Strong to severe thunderstorm development is also possible over the central High Plains, where large hail and severe gusts are the threats," the Storm Prediction Center said.

In western Kansas, the SPC has posted an Enhanced risk (level 3 out of 5).

By Sunday night, as colder air pushes in behind the front, snow is forecast for the higher elevations of Colorado and Wyoming.

Several cities along the Front Range of the Rocky Mountains will go from having temperatures 15-20 degrees above normal to 20-25 degrees below normal in just 48 hours.

Denver will be one of those cities feeling seasonal whiplash. On Saturday, the mile-high city reached 86 degrees, their average high for late June and one degree shy of the record for May 1. By Monday, the city will be expecting a high temperature of only 47 degrees -- their normal high for late February.

The exceptionally warm air ahead of the front will be fueling yet another day of severe storms -- this time along the Mississippi River Valley region.

On Monday, over 40 million people from Dallas, Texas, to Columbus, Ohio, will be under the threat for severe storms. The main dangers will be damaging winds hail, and tornadoes.

The greatest threat for tornadoes exists from Tulsa, Oklahoma over to Paducah, Kentucky.

The biggest concern for the lower Ohio River Valley through the Ozark Plateau will be the timing of the storms, which will largely be in the evening and overnight. A recent study found that nighttime tornadoes are more than twice as likely to be deadly.