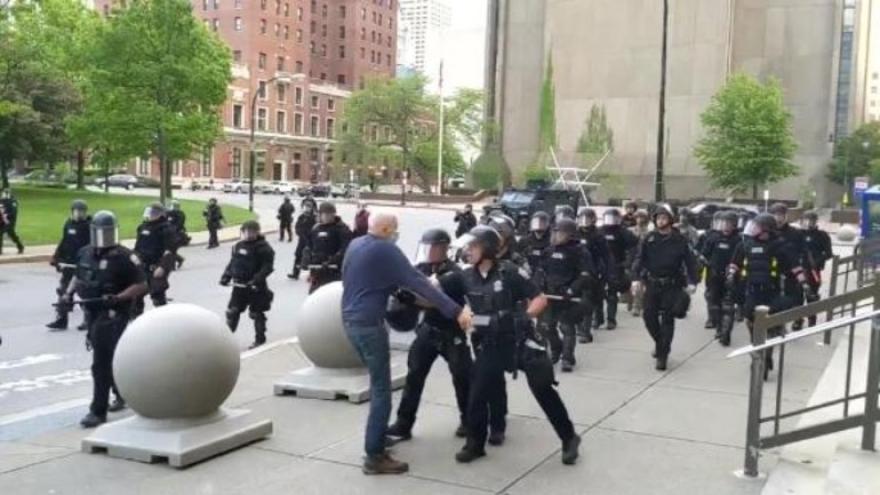 (CNN) -- Fifty-seven police officers in Buffalo, New York, have resigned from the force's emergency response team following the suspension of two officers who are seen on video pushing a 75-year-old protester, a source close to the situation said Friday.

An investigation is underway in a protest incident Gov. Andrew Cuomo called "wholly unjustified and utterly disgraceful." The man was seriously injured.

Video of the demonstration Thursday shows a row of officers walking toward the man and two pushing him. His head bleeds onto the sidewalk as officers walk past him, some looking down at him.

The demonstrators in Niagara Square were, like those across the country, calling for racial justice after the killing of George Floyd in Minneapolis police custody.

A few members of the unit are out currently and are not included in the 57 that resigned, according to the mayor's office.

"Fifty-seven resigned in disgust because of the treatment of two of their members, who were simply executing orders," Buffalo Police Benevolent Association president John Evans told WGRZ on Friday. WKBW also reported news of the resignations.

The man's identity, Martin Gugino, was confirmed by Cuomo's office. Gugino is hospitalized in serious but stable condition, authorities said.

An attorney representing Gugino released a statement saying Gugino is "alert and oriented" and described him as a longtime peaceful protester and human rights advocate.

"Mr. Gugino requests privacy for himself and his family as he recovers," said Kelly V. Zarone. "He appreciates all of the well wishes he has received and requests that any further protests continue to be peaceful."

Protests in the city continued into the evening Friday.

Mayor Byron Brown said he wants the two suspended officers to get due process. "I am not calling for them to be fired."

Speaking of the injured man, the mayor said, "He was asked to leave numerous times last night."

Police felt that it was important to clear the area before fights broke out among the protesters, the mayor said. He stressed that the instructions from the police managers to officers was to be careful, protect residents and use common sense.

CNN has reached out to police and the association for further comment. New York State Police say they are sending additional officers to the city following the resignations.

The demonstrators in Niagara Square were, like those across the country, calling for racial justice after the killing of George Floyd in Minneapolis police custody.

After more videos became available, police amended that statement, and Buffalo Police Commissioner Byron Lockwood suspended the officers without pay and opened an investigation, he said.

"The department moved swiftly" and "corrected" the information, DeGeorge said.

Brown called the incident "disheartening" and said his thoughts were with Gugino.

Gugino had a head injury and could not give a statement to investigators Thursday night, the tweet said.

Cuomo said the officers should be fired and prosecutors should move "fairly but quickly."

"When I saw the video, I got sick to my stomach," Cuomo said. "I would encourage the district attorney not to do what happened in Minneapolis, which the delay itself caused issues," said the governor, adding, "People don't want vaguery. They are upset and want answers."

Earlier on Twitter, he said, "This incident is wholly unjustified and utterly disgraceful. ... Police Officers must enforce -- NOT ABUSE -- the law."

Cuomo said he spoke with Gugino.

"Thankfully he is alive," Cuomo said Friday at his daily news conference in Albany. "You see that video, and it disturbs your basic sense of decency and humanity."

Cuomo also called out attacks on police officers, saying, "You have incidents of police getting hit with bricks in the head. Who are we?"

Update: This article and headline have been updated to reflect that the video shows officers pushing the man.