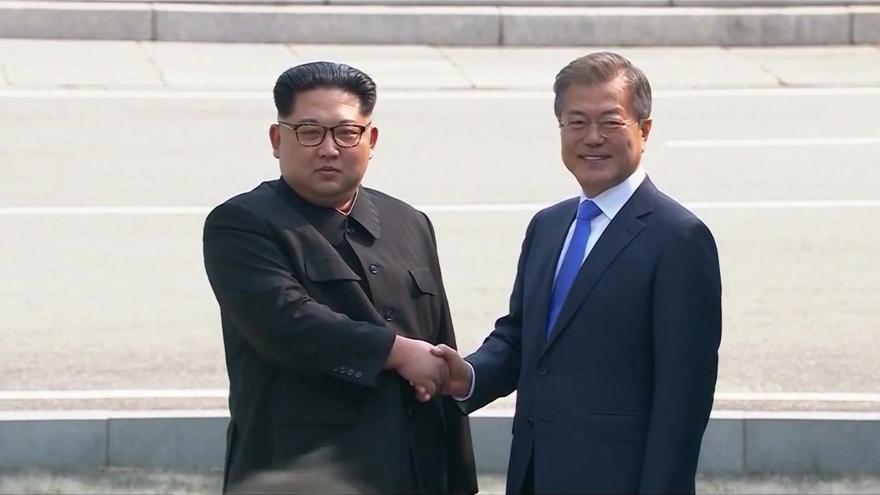 The dismantling of dozens of loudspeakers was in line with an agreement on reconciliation by the leaders of the Koreas at their historic summit last Friday. It is still unclear if such measures can bring permanent peace because no major breakthrough in the North Korean nuclear standoff was produced at the summit.

South Korean soldiers disassembled loudspeakers in multiple front-line areas in the presence of journalists before pulling them away from the border, the Defense Ministry said.

Both Koreas had turned off the propaganda broadcasts along the 248-kilometer (154-mile) -long border last week before the summit.

They had restarted their propaganda warfare in early 2016 when tensions rose sharply after North Korea's fourth nuclear test. South Korea broadcast K-pop songs as well as criticism of the North's abysmal human rights conditions, world news and weather forecasts. The North broadcast anti-South messages and praises of its own political system.

North Korea is extremely sensitive to any outside criticism of its system, and most of its 24 million people are not allowed access to foreign TV and radio programs. In 2014, North Korean soldiers opened fire after South Korean activists sent anti-North leaflets over the border with large balloons, prompting South Korea to return fire. There were no reports of casualties.

North Korean leader Kim Jong Un has suspended nuclear and missile tests and placed his nuclear program up for negotiation, but skepticism lingers about how serious his offer is and what disarmament steps he would eventually take. Some experts say Kim's sincerity will be tested during his planned meeting in several weeks with U.S. President Donald Trump, in what would be the first North Korea-U.S. summit talks since the end of the 1950-53 Korean War.

Trump said Monday he likes the idea of going to the southern side of Panmunjom, the location of the Korean summit, to meet Kim, though he said Singapore was also under consideration.

During Friday's summit, Kim told South Korean President Moon Jae-in that he would shut down his country's only known nuclear test site and allow outside experts and journalists to watch the process. He also said he would be willing to give up his nuclear programs if the United States commits to a formal end to the Korean War and pledges not to attack the North, according to South Korea's presidential office.

During a telephone call with U.N. Secretary-General Antonio Guterres on Tuesday, Moon said he wants the U.N. to observe the closure of the Punggy-ri test site. Moon also asked the U.N. to formally declare its support for his summit declaration with Kim. Guterres responded that he will try to contribute to the establishment of peace on the Korean Peninsula, according to Moon's office.

Some experts downplayed the closure of the Punggy-ri site, saying the six underground nuclear explosions that have been conducted there may have made it too unstable for more testing. Kim denied such views, saying the site has two additional underground tunnels that could be used for new tests.

A major source of outside suspicion about Kim's sincerity is his use of the term, "the denuclearization of the Korean Peninsula" instead of "the denuclearization of North Korea." North Korea has long used the first term, and has argued it can disarm only when the United States withdraws its 28,500 troops from South Korea and removes its so-called "nuclear umbrella" security commitment to South Korea and Japan.

A joint summit statement issued by Kim and Moon said they will work together to achieve "a nuclear-free Korean Peninsula through complete denuclearization."

It was the first time that Kim has proposed negotiating away his nuclear weapons, and some analysts say he could reveal more substantial disarmament measures in his meeting with Trump, including the possible scrapping of his long-range missile program that has posed a direct threat to the United States.

Prospects for the Kim-Trump talks remain unclear because Kim prefers a gradual, step-by-step disarmament process in return for corresponding rewards, while the United States wants complete, verifiable and irreversible denuclearization.

On Monday, Moon shook off a suggestion that he receive the Nobel Peace Prize for reducing tensions with North Korea, saying Trump "can take the Nobel prize" as long as the Koreas receive peace in return.