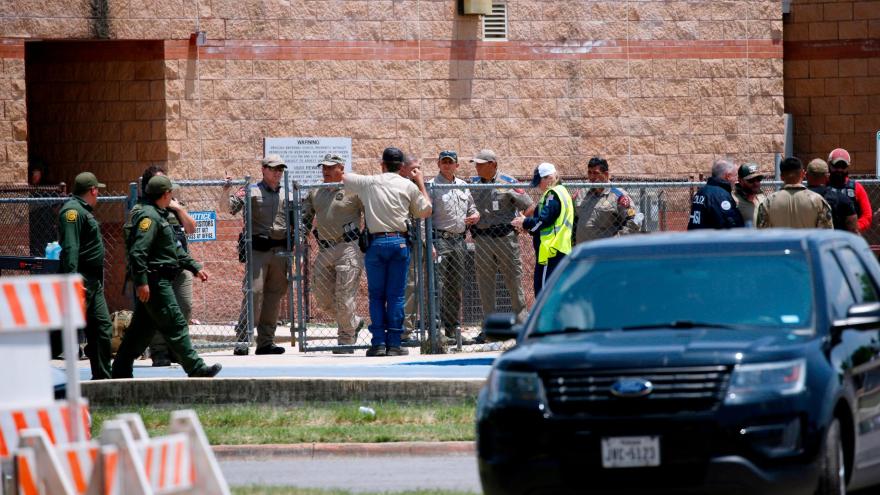 (CNN) -- An 18-year-old gunman on Tuesday fatally shot 19 children and two adults at a Texas elementary school before he was killed by law enforcement officers, officials said.

The shooter -- identified by Texas officials as Salvador Ramos, of Uvalde -- also shot his grandmother before going to the school, three law enforcement sources told CNN. State Sen. Roland Gutierrez told CNN the grandmother was airlifted to San Antonio and "is still holding on," according to information he was given by the Texas Rangers.

LIVE UPDATES ON THE SHOOTING

The shooting was the deadliest at an elementary school since the Sandy Hook massacre in Connecticut in 2012 that left 26 people dead, including 20 children between 6 and 7 years old.

Here are the latest developments in Tuesday's tragedy:

• Texas Department of Public Safety Sgt. Erick Estrada told CNN's Anderson Cooper the gunman wrecked a vehicle while driving near the school after shooting his grandmother. "The suspect did crash near a ditch nearby the school. That's where he exited his vehicle with what I believe was a rifle and that's when he attempted to enter the school where he was engaged by law enforcement."

• The gunman had body armor, the rifle and a backpack, Estrada said. Ramos made it into several classrooms, Estrada added.

• US Customs and Border Protection, which is the largest law enforcement agency in the area due Uvalde's proximity to Mexico, had more than 20 agents respond to the shooting, according to a law enforcement official. A CBP agent was shot in the head, but is in stable condition after the bullet did not penetrate, the official said.

• Department of Homeland Security spokeswoman Marsha Espinosa tweeted agents and other law enforcement officers took fire from the shooter, who had barricaded himself. "Risking their own lives, these Border Patrol Agents and other officers put themselves between the shooter and children on the scene to draw the shooter's attention away from potential victims and save lives," she wrote.

• President Joe Biden has ordered US flags on federal grounds to be flown at half-staff until sunset on Saturday to honor the victims of this "senseless acts of violence."

• Uvalde Memorial Hospital spokesperson Tom Nordwick earlier said 13 children and a man in his 40s were being treated for injuries. University Hospital in San Antonio said in a tweet they received a child and an adult from the school shooting. The adult, a 66-year-old woman, is in critical condition, the hospital said in a tweet.

• The FBI and the Bureau of Alcohol, Tobacco, Firearms and Explosives (ATF) are assisting local and state authorities with the investigation.

30th shooting at a K-12 school this year

Tuesday's incident marks at least the 30th shooting at a K-12 school in 2022. So far in 2022 there have been at least 39 shootings in K-12 schools, colleges and universities, resulting in at least 10 deaths and 51 injuries.

The Texas shooting is the deadliest US school shooting since the Marjory Stoneman Douglas High School shooting in Parkland, Florida, in February 2018, when 17 people were killed.

Biden calls for lawmakers to have a backbone

President Biden addressed the shooting in emotional remarks from the White House Tuesday evening, saying, "I had hoped when I became President I would not have to do this again."

Turning to the issue of gun control legislation, Biden implored lawmakers to "turn this pain into action" as he ticked through some of the mass shootings since the 2012 massacre at Sandy Hook Elementary School in Newtown, Connecticut, when he was vice president.

"Why do we keep letting this happen? Where in God's name our is backbone to have the courage to deal with and stand up to the lobbies?" he said.

Robb Elementary teaches second through fourth grades and had 535 students in the 2020-21 school year, according to state data. About 90% of students are Hispanic and about 81% are economically disadvantaged, the data shows. Thursday was set to be the last day of school before the summer break.

The school district said it is canceling all school activities following the shooting.