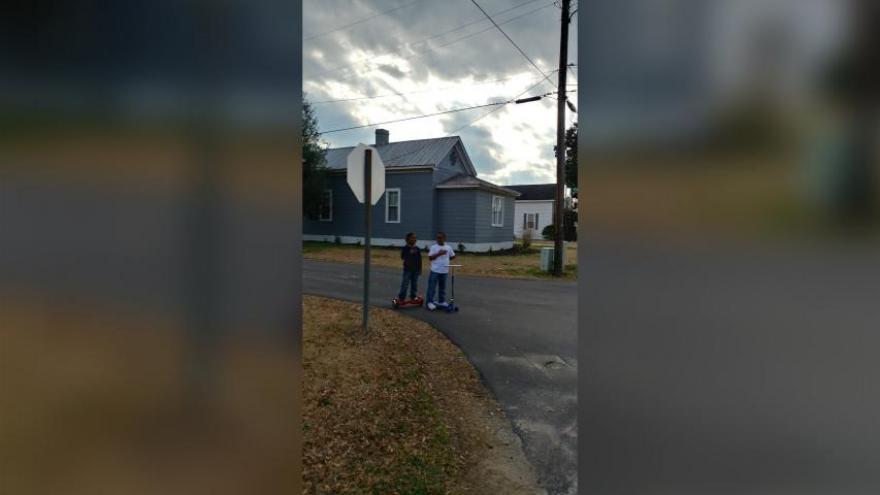 Two boys in Roseboro, North Carolina, stopped in the road and recited the Pledge of Allegiance. The Roseboro Fire Department posted the picture on Friday and it quickly went viral.

(CNN) -- Folks on Facebook fell in love with two North Carolina boys who recited the Pledge of Allegiance.

But it wasn't that they recited it, it's how they did it.

Roseboro Fire Department Chief Kenneth Lee Coleman Jr. said Monday the department's chaplain, Bobby Herring, was raising the US flag to full staff Friday when he looked over and saw two boys at an intersection "with hands on their heart saying the pledge."

Before making the post, Coleman said the chaplain checked with him. Coleman said it was OK and within five minutes, he said, the post had 100 likes.

"I thought that's pretty good for us because we don't usually get that many likes," Coleman said. He described Roseboro, about 24 miles from Fayetteville, as a town with two stoplights and a population of 1,200 where everyone knows everyone.

Coleman didn't check the post again for a few hours, after he started getting calls about it going viral.

"I would've never thought that it would've gone this far. It has definitely exploded a lot more than I thought it would," he said.

Since it was posted Friday, the post has been liked more than 3,000 times, shared 3,000 times and has over 400 comments praising the two boys and their parents.

"That pic gives me goosebumps and tears!! Thanks parents for teaching your kids respect and manners," one comment read.

"That picture is worth a thousand words! They know respect!" another read.

Coleman teaches public safety at a local high school, giving students an introduction to public service jobs like firefighting, policing and working as emergency medical technicians. He said he could see the two young men becoming firefighters or police officers because both jobs require workers to be respectful and professional.

"They're being taught that now so there's hope they can have a good future in front of them," he said. "It shows hope for the future."