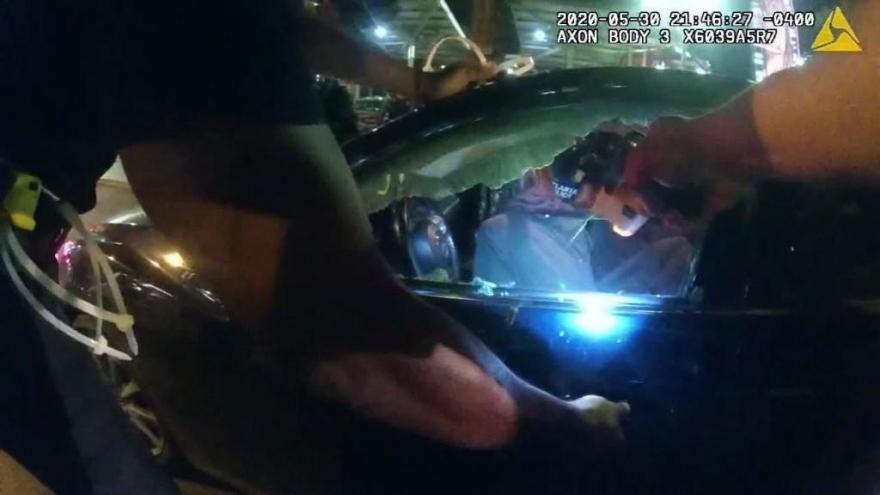 Officers were filmed in downtown Atlanta breaking the windows of the vehicle the two people were in, yanking a woman out of the car and tasing the man. Atlanta Police Chief Erika Shields said she recognized the two as Spelman College and Morehouse College students. Both schools are historically black colleges in Atlanta.

"It was the worst experience of my life," said the woman, identified as Taniyah Pilgrim, 20. She said she and her friend Messiah Young, the man in the video, were on their way home from picking up food when they got caught in traffic downtown caused by a protest of police violence against black citizens.

Mayor Keisha Lance Bottoms said she was disturbed when she saw the video and ordered charges to be dropped against the man. The woman was not charged.

One of the officers wrote in a police report that he used his taser because he was unsure whether Pilgrim or Young were armed.

The incident is just the latest in a string of filmed interactions between African Americans and police that at times turn deadly, as in the case of George Floyd, an unarmed black man who was killed by police in Minneapolis, Minnesota. Protest have erupted across the country as a result of Floyd's death, which has caused major cities to implement curfews and call on the National Guard for assistance.

The front of CNN Center in Atlanta was the scene of violent protests on Friday evening that resulted in damage to the front of the building and inside. Protests continued into Saturday.

"This video was really shocking to watch in how we were manhandling a couple of young people in their car," said Atlanta Police Chief Erika Shields.

There were a total of five officers involved in the incident, Bottoms said. Aside from the two fired officers, the other three officers are now on desk-duty pending further determination of what, if any, disciplinary appropriate should be taken against them, Bottoms said during a press conference on Sunday.

There were five officers involved in this incident, Bottoms said. Aside from the two fired officers, the other three officers are on desk duty pending further determination of what, if any, appropriate disciplinary action should be taken against them.

Bottoms said she had not spoken directly with the students but has spoken to their representatives and looks forward to speaking with them directly.

Correction: An earlier version of this story incorrectly reported that Taniyah Pilgrim and Messiah Young had taken part in protests before their arrest.