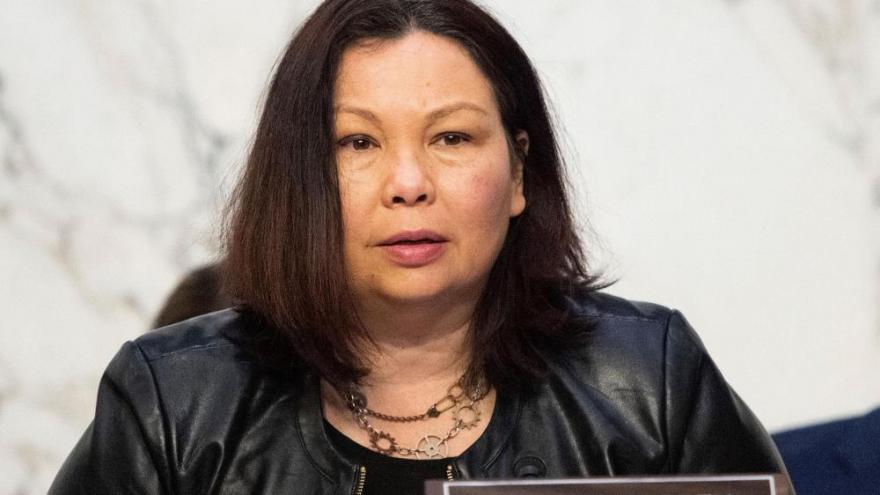 (CNN) -- Sens. Tammy Duckworth and Mazie Hirono on Tuesday backed off their threat to vote against any of President Joe Biden's nominees who aren't minorities, after going public with their anger that the Cabinet lacks Asian Americans, and Duckworth earlier saying she felt insulted by the White House's attempts to brush off her concerns.

The move came after a tense Monday exchange between Duckworth and a top Biden aide, followed by a series of conversations Tuesday and ultimately a decision by the White House to install a senior-level aide responsive to a community that has suffered an uptick in violent and racist attacks since the beginning of the Covid-19 pandemic last year.

Seeking to cool tensions with the Illinois Democrat and Hirono -- a Hawaii Democrat -- the White House agreed to add a senior Asian American and Pacific Islander liaison and pledge to elevate diverse voices to the highest levels of government.

"The President has made it clear that his Administration will reflect the diversity of the country," White House press secretary Jen Psaki said in a statement. "That has always been, and remains our goal. The White House will add a senior level Asian American Pacific Islander liaison, who will ensure the community's voice is further represented and heard."

Earlier, Duckworth had told CNN she felt the White House's attempts to address her worries about Asian American and Pacific Islander representation in the administration were insulting.

"To be told that you have Kamala Harris, we are very proud of her, you don't need anybody else, is insulting," Duckworth said, adding she's been told that "multiple times" by the White House.

"That's not something you would say to the Black caucus -- that you have Kamala -- we're not going to be putting any African Americans in the Cabinet -- why would you say that to AAPIs?"

But a Duckworth spokesman said Tuesday night that she appreciated the administration's gesture and would drop the threat.

"Sen. Duckworth appreciates the Biden Administration's assurances that it will do much more to elevate AAPI voices and perspectives at the highest levels of government, including appointing an AAPI senior White House official to represent the community, secure the confirmation of AAPI appointments and advance policy proposals that are relevant and important to the community," said Ben Garmisa, spokesman for Duckworth. "Accordingly, she will not stand in the way of President Biden's qualified nominees—which will include more AAPI leaders."

Hirono tweeted late Tuesday night that she welcomed the announcement.

"I welcome the appointment of a senior level White House liaison to the AAPI community to further strengthen our voice," Hirono tweeted. "I had a productive conversation with the White House today to make clear my perspective about the importance of diversity in the President's cabinet."

She added, "Based on the private conversation we had, I will continue voting to confirm the historic and highly qualified nominees President Biden has appointed to serve in his administration."

If the two Democratic senators had carried through with the threat, the confrontational stand could have put executive branch and judicial picks in jeopardy in a 50-50 Senate if all Republicans voted against one of the President's nominees. There were concerns the move could imperil a Biden Pentagon pick.

Duckworth had said she informed the White House she would oppose the nomination of Colin Kahl as the Pentagon's top policy director, a nomination that was already hanging by a thread over criticism stemming from his past tweets.

The Democratic senators had indicated they would vote against non-minority nominees on the floor, not in committee, which could potentially allow Kahl to advance out of the Senate Armed Services Committee.

Duckworth had told CNN on Tuesday that she planned to vote "no" on all of Biden's upcoming nominees until the President made a commitment and appointed Asian Americans and Pacific Islanders to key executive branch positions. Duckworth was the first Thai American woman elected to Congress and the first female double amputee in the US Senate.

"President Biden will be the first President in 20 years without a Cabinet secretary who is AAPI," a frustrated Duckworth told CNN.

Hirono had told reporters of the decision, "It means that we would like to have a commitment from the White House that there'll be more diversity representation in the Cabinet, and in senior White House positions. And until that happens, we will be able to join her in voting no on non-diversity nominees. I think that is a reasonable position."

A lack of AAPI diversity in top roles in the new administration has come under increased scrutiny amid a rise in anti-Asian violence across the United States against the backdrop of the Covid-19 pandemic. Last week, eight people -- six of whom were Asian women -- were killed in Atlanta-area shootings at three spas.

Biden on Tuesday defended his Cabinet selections amid the criticism.

"We have the most diverse Cabinet in history. We have a lot of Asian Americans who are in the Cabinet and sub-Cabinet level. Our Cabinet is formed," Biden told reporters before heading onto Air Force One in Ohio.

Duckworth praised Biden's comments at a Democratic retreat Monday night about violence against Asian Americans, but after he got off the call, things got contentious when White House deputy chief of staff Jen O'Malley Dillon addressed concerns over lack of AAPI representation.

"When I asked about AAPI representation in the second part, the first words out of the staff's mouth was: 'We're very proud of Vice President Harris,' which was incredibly insulting," Duckworth said.

Duckworth noted that Asian American lawmakers were told the US trade representative and the White House budget director would be Asian American. Katherine Tai was recently confirmed as trade representative. Tai, the daughter of immigrants from Taiwan, is the first woman of color to be the top US trade negotiator. But after Neera Tanden's nomination to lead the Office of Management and Budget collapsed, Duckworth said it appears the White House is going in a different direction on that pick.

At the same retreat on Monday, Hirono criticized the White House for a lack of Asian American representation in the Biden Cabinet, adding that she wasn't satisfied with Dillon's response.

"What I said was, I shared the position that AAPI community has that there hasn't been a significant number of AAPIs at the Cabinet level," Hirono said. "I realize that we have Katherine Tai, but I don't think the trade representative is what the community understands as a Cabinet level."

She also said she had raised concerns that the White House was sharing polling about the views of voters on Biden and his agenda but that polling did not adequately represent the views of the community.

"I also pointed out that one of the concerns I have whenever there's polling done about the position of various groups, I would like to see in a consistent way, the AAPI community being polled," said Hirono, who's a Japanese American. "And I made that point last night."

Hirono added, "It's everybody's issue. ... And when they're presented with polls, I'd like to see who's being polled, who's asked these questions. And my major point was that the AAPI community should be asked."

Asked if White House officials acknowledged they would change anything, Hirono said: "What I heard was that they were actually included. I said, no, not in any consistent way. I told them. I gave them examples of why. And so to me the main point is if you consider this an important group of people, they should be consistently asked for their positions."

And Hirono was blunt when asked whether she was satisfied with the White House's response.