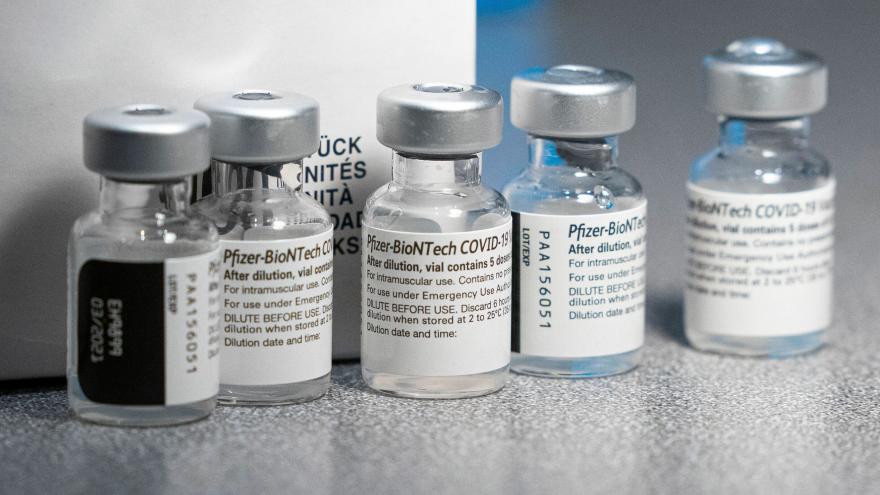 (CNN) -- Two workers at an Alaska hospital suffered allergic reactions after receiving Pfizer's Covid-19 vaccine this week, and one was kept for observation for at least two nights, hospital representatives said.

The hospitalized worker's reaction was more serious but not life-threatening, doctors said: She felt flushed within the first 10 minutes of receiving the vaccine Tuesday at Bartlett Regional Hospital in Juneau and later reported symptoms including shortness of breath and elevated heart rate.

The second Bartlett health care worker was treated for less severe symptoms after being injected Wednesday, felt fine within an hour and was released, hospital officials said.

The cases are the first allergic reactionsto the vaccine to be widely reported in the US, although health officials said they are expecting the occasional allergic reaction -- and are prepared to treat anyone suffering from one.

The two workers were among staff being vaccinated at Bartlett Regional Hospital as part of the rollout of Pfizer's vaccine across the country this week. State health officials reported the first one Wednesday, and the hospital publicized the second later in the day.

"We expected that a side effect like this could occur after reports of anaphylaxis were made in England after people there received the Pfizer-BioNTech Covid-19 vaccine," Alaska's Chief Medical Officer Dr. Anne Zink said after the first reaction was reported. "All sites that are approved to provide vaccinations in Alaska must have medications on hand to deal with an allergic reaction and that was the case in Juneau."

The first staff member was admitted to the hospital

The first worker was initially held in the vaccine monitoring area right after receiving the shot Tuesday and took a Benadryl, said Dr. Lindy Jones, an attending physician at Bartlett Memorial Hospital. When she reported shortness of breath, she was taken to the emergency room.

When Jones saw her in the hospital, he said she was experiencing shortness of breath and an elevated heart rate, and had developed a rash covering her face and torso.

"I was concerned about an anaphylactic reaction so gave her the standard treatment of a dose of intramuscular epinephrine and she responded immediately," Jones told a news briefing. She was also given antihistamines.

She still had an elevated heart rate and was breathing fast -- a sign of an allergic reaction -- so Jones gave her another dose of epinephrine, as well as steroids "which is another standard bread and butter treatment for adverse anaphylactic reactions," he said.

The worker, who was not further identified to protect her privacy, had no previous history of allergies to vaccines, Jones said.

She was almost recovered after a night in the intensive care unit, Jones said. Later Wednesday, she still was recovering well but would remain another night in the hospital, representatives there said.

"She was still enthusiastic that she got the vaccine and the benefits it would give her in the future," Jones said.

"This was an instance where the system worked very well," Dr. Jay Butler of the US Centers for Disease Control and Prevention told the news briefing.

The second worker "experienced eye puffiness, light headedness, and scratchy throat 10 minutes after being injected with the vaccine" Wednesday, the hospital said in a news release.

Whereas the first worker showed signs of a serious, anaphylactic reaction, the second worker's reaction "was not considered anaphylaxis," the hospital's news release reads.

The second worker "was taken to the emergency department and administered epinephrine, Pepcid and Benadryl," the release reads. "He felt completely back to normal within an hour and was released"

Like the first worker, the second "does not want his experience to have a negative impact on his colleagues lining up for the vaccine," the statement reads.

Both incidents were reported to the CDC

"Both incidents were reported to the CDC's Vaccine Adverse Event Reporting System (VAERS) database. Bartlett Regional Hospital and the State of Alaska Department of Health and Social Services are in close communications with the CDC, and the agency is providing guidance and support," the hospital's statement reads.

Dr. Paul Offit, a member of the US Food and Drug Administration's Vaccines and Related Biological Products Advisory Committee, said on Wednesday that doctors will have to keep an eye out for allergic reactions to the new vaccine.

"It's the kind of thing that we're obviously going to need to look at," Offit told CNN's Brianna Keilar.

He noted there were two reported cases of allergic reaction in Britain, which rolled out the vaccine earlier this month.

"Currently, the CDC recommendation is that if you ever had a severe allergic reaction to an injectable medical product, you shouldn't get this vaccine," Offit added.

"About one out of every million people that get a vaccine can have a severe allergic reaction to the vaccine. What we need to find out is what specifically seems to be inducing this allergic reaction."

The FDA is working with Pfizer and the CDC to better understand what happened in Alaska, an FDA spokeswoman said Wednesday after the first allergic reaction in Alaska was publicized.

"Importantly, the fact sheets to health care providers include language that severe allergic reactions have been reported following vaccination and that appropriate medical treatment used to manage immediate allergic reactions must be immediately available for administration of any individual in the event an acute anaphylactic reaction occurs," the spokeswoman told CNN.

The Asthma and Allergy Foundation of America also noted on Wednesday that the FDA and CDC "are all keeping an eye on" the reported adverse events.

"Recent media reports of reactions to the new Pfizer/BioNTech COVID-19 vaccine, first out of the UK and now one report in the United States are stirring safety concerns for people with a history of serious allergies. It's important to remember that we still don't have the full details regarding the specifics of any of these reported reactions," Dr. Mitchell Grayson, chair of the foundation's medical scientific council said in a written statement Wednesday, before the second Alaskan case was publicized.

"We're in the early stages of COVID-19 vaccine rollout. It is common to see adverse vaccine reactions once wider distribution to the general public begins, even if none of these reactions were observed in clinical trials," Grayson said. "Additional vaccines are in the pipeline so there will likely be more options if it is determined that one vaccine works better in certain populations than others. It's important to let the science do its work, not the headlines. Anyone with concerns about allergy risk should consult with their doctor."

Correction: A previous version of this story included an incorrect photo. The image has been replaced with a photo that shows Pfizer-BioNTech's Covid-19 vaccine.