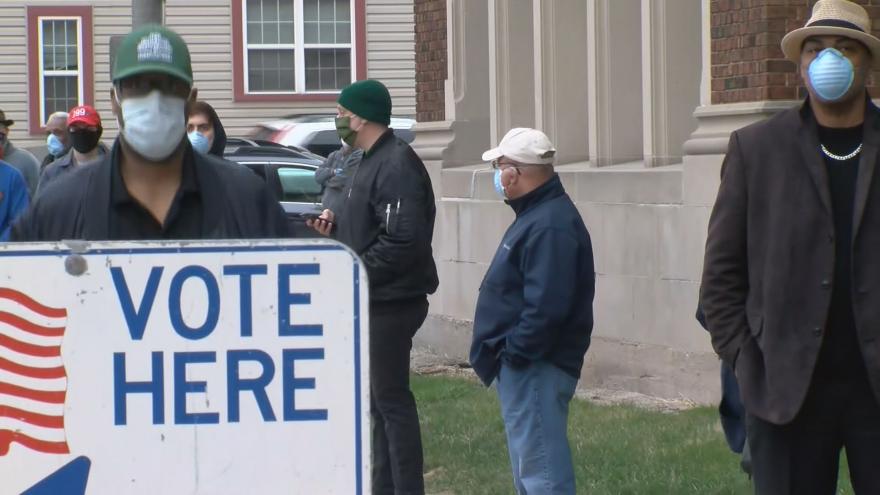 At least 19 people in Wisconsin who said they voted in-person or worked the polls for the state's April 7 primary election have tested positive for the coronavirus, according to the state health department.

(CNN) -- At least 19 people in Wisconsin who said they voted in-person or worked the polls for the state's April 7 primary election have tested positive for the coronavirus, according to the state health department.

However, Willems Van Dijk said that several of those people "reported other possible exposures as well."

"Since we only have data on positive cases (without a comparison group of people who were not tested or tested negative), there is no way to know with certainty if any exposures at the polls that are reported are in fact attributable to COVID-19 illness," Willems Van Dijk said in a statement provided to CNN Wednesday.

The state's decision to hold in-person elections in the middle of a pandemic was roundly criticized by candidates and health experts, and turned into a bitter partisan battle.

Democratic Gov. Tony Evers lost his last-minute bid to delay voting until June, as Republicans in the state successfully fought in court to have the election take place as planned.

Despite the governor's stay-at-home order restricting large gatherings and national health guidelines recommending social distancing, voters in Milwaukee queued to vote on April 7 in long lines — many of them wearing face masks.

After the election, the state health department announced it would be monitoring the cases from exposure at the polls and see if the election had any impact on the spread of coronavirus.

The Milwaukee health department, however, only has 30% of the data from new cases as of April 7, he said in a statement.

Benjamin said the department plans to provide a complete report Friday, with a comprehensive county update next week.

"While we continue to monitor cases of Covid-19 linked to election activity, we know that gatherings such as (the election) are detrimental to the efforts to slow the spread of this pandemic," Dr. Ben Weston, the Medical Director for the Milwaukee County Office of Emergency Management, said in the statement.

Milwaukee consolidated its 180 polling places down to just five locations -- and in those locations, voters stretched around multiple blocks. Many poll workers quit, leaving nearly 300 of the state's National Guard troops to replace those volunteers.

There were over 2,500 reported cases of coronavirus and 85 deaths in Wisconsin as voters headed to the polls. As of Wednesday, the confirmed number of cases in the state is more than 4,600 and there have been 244 deaths, with Milwaukee County leading in cases and deaths, according to Johns Hopkins University's tally of cases in the United States.

Nilsestuen argued that there will be "significant differences," however, between this special election and the April 7 primary.

He said that the special election can be expected to have a much lower turnout since it will be held in a rural area where polling locations won't be overcrowded, and it will take place in a region with fewer reported Covid-19 cases. He also said the May 12 special election allows enough time for voters to request absentee ballots and for the state to provide personal protective equipment to polling locations.