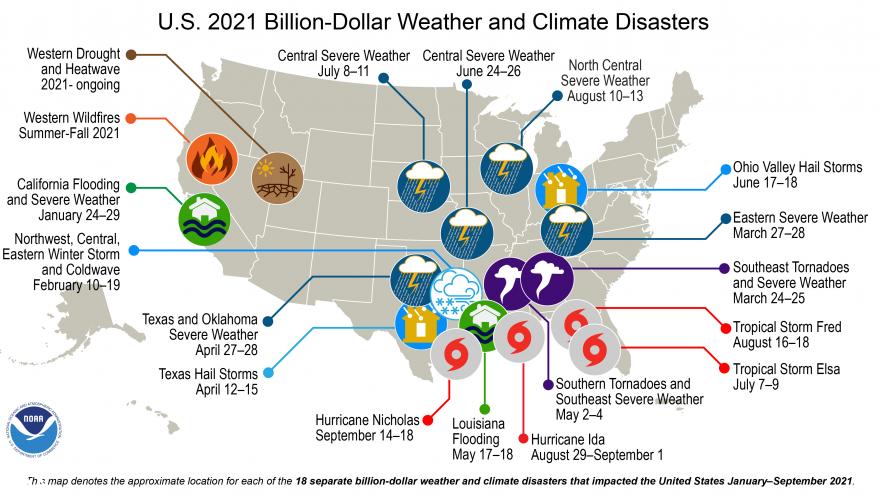 (CNN) -- Weather and climate disasters in the US have taken more than 500 lives and cost over $100 billion so far this year, according to the National Oceanic and Atmospheric Association.

In the first nine months of 2021, the US has already faced 18 disasters that have cost more than a billion dollars each, according to a report from NOAA's National Centers for Environmental Information.

This is the seventh consecutive year the US has had more than 10 disasters totaling more than a billion dollars.

September alone brought "devastating impacts from four of the 18 disasters: flooding from Hurricane Ida, landfall of Hurricane Nicholas, and ongoing drought and wildfires tormenting communities in the West," NOAA said.

These disasters for 2021 include: nine severe storms, four tropical cyclones, two flooding events, one combined drought and heat wave, one wildfire event, and one combined winter storm and cold wave.

This is "more than twice the number of fatalities than from all the events that occurred in 2020," the report says.

"Total losses due to property and infrastructure damage is up to $104.8 billion so far — eclipsing $100.2 billion incurred last year (adjusted for 2021 inflation)," the report says.

2020 saw the record number of billion dollar disasters at 22.

Hurricane Ida has been the costliest disaster so far this year, and the final price tag is still unknown as claims are continuing to rise.

So far, Ida has exceeded $60 billion, ranking it as one of the top-five most costly US hurricanes on record.

Ida not only brought devastation to the Gulf Coast, but then caused catastrophic flooding to parts of the Northeast on September 1.

"Flash Flood Emergencies were declared for the first time on record across parts of New Jersey and New York. Flash flooding, strong tornadoes and many fatalities resulted," says the report.

September was one of the warmest on record.

"The average September temperature across the contiguous U.S. was 67.8 degrees F — 3.0 degrees above the 20th-century average — making it the fifth-warmest September in the 127-year climate record," says the report. Colorado and Rhode Island had its third warmest September on record.

"Precipitation was above average across portions of the Northwest, Southwest, northern and central Plains and from the central Gulf Coast to New England," says the report.

Pennsylvania had its seventh-wettest September while Massachusetts ranked eighth wettest, mainly because of rain received by Ida's remnants.

Precipitation was below average across much of the northern Rockies, Deep South and Midwest, according to the report. Oklahoma had its ninth-driest September on record.

By the end of September, around 47.8 percent of the contiguous US was in drought.

"Drought conditions expanded or intensified across portions of the Midwest and central Plains and rapidly developed across the southern Plains during the second half of September," says the report.

The drought in the West has lead to an active wildfire season across the region.

The KNP Complex wildfires erupted in Sequoia & Kings Canyon National Park in California during September, threatening some of the oldest and largest sequoia trees in the world.