18 police officers were hurt in a Chicago protest. 'We were outnumbered and unprepared,' one says 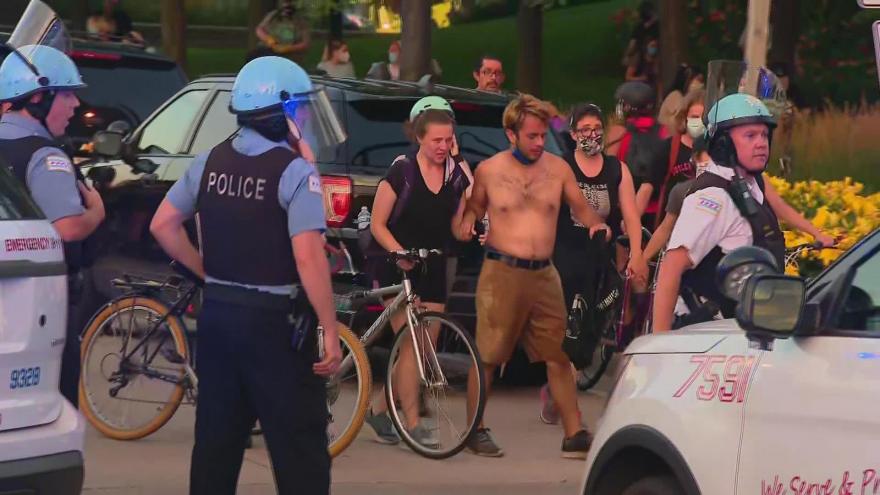 Eighteen Chicago Police officers were injured in a protest, the department said in a statement.

(CNN) -- Eighteen Chicago Police officers were injured in a protest Friday, the department said in a statement.

A large group gathered for a protest around 4:20 p.m. local time, the department said. Officers were there "providing security and protecting their First Amendment right to peaceful assembly," the statement said.

Approaching a statue of Christopher Columbus, some people in the crowd used rocks, fireworks, frozen bottles and other objects to attack officers, the statement said.

The attack resulted in 18 officers injured, the statement said. Some were taken to area hospitals by paramedics for further treatment and some were treated at the scene.

About 12 people were arrested and could potentially face charges that may include battery to a police officer, mob action, and/or other felonies, according to the statement.

At a news conference on Saturday, activists demanded the immediate defunding of the police department.

"We have a right to freedom of assembly. We have a right to protest. What happened yesterday was a travesty. That's what happens in dictatorships," Aislinn Pulley with Black Lives Matter Chicago said, adding she saw people beaten by police and officers using tear gas.

Amika Tendaji, another member of Black Lives Matter Chicago, said, "We cannot bodycam our way out of this. We cannot do any kind of reforms to get those people to act with humanity. They must be defunded."

"We must get police out of our communities and invest in housing, schools, social services, grocery stores," he said. "That is what lifts up our communities."

Mayor Lori Lightfoot confirmed there were "several reports of excessive force by the police," adding that the Civilian Office of Police Accountability would address the complaints.

The Civilian Office of Police Accountability (COPA) confirmed Saturday in a statement that it is investigating "numerous complaints" of police misconduct.

COPA said it has begun preliminary investigations into "the most egregious complaints filed" and is viewing a "widespread video shared" on social media.

'We were outnumbered and unprepared,' officer says

"I have 17 years on this job. Last night was another example of how our leaders have let the radicals take over," the officer said. "We were outnumbered and unprepared once again. The initial officers on scene had no helmets or shields. Coppers were getting pelted with rocks, sticks, bottles and then shot with fireworks."

"The lack of leadership has already gotten dozens of officers hurt....if the police aren't allowed to do what is needed we will be burying one of our own," the veteran officer told CNN.

The incident comes two days after three NYPD officers and a top chief were injured after a clash with protesters.

A 24-year-old female was arrested for striking the officers with a cane as they tried to arrest a protester, the department said.

"Three officers violently attacked by protesters crossing the Brooklyn Bridge," the department said on its verified Twitter page. "The officers sustained serious injuries. This is not peaceful protest, this will not be tolerated."