16 years after her late husband's donated organs saved a life, she gave her kidney to save the life of the same man 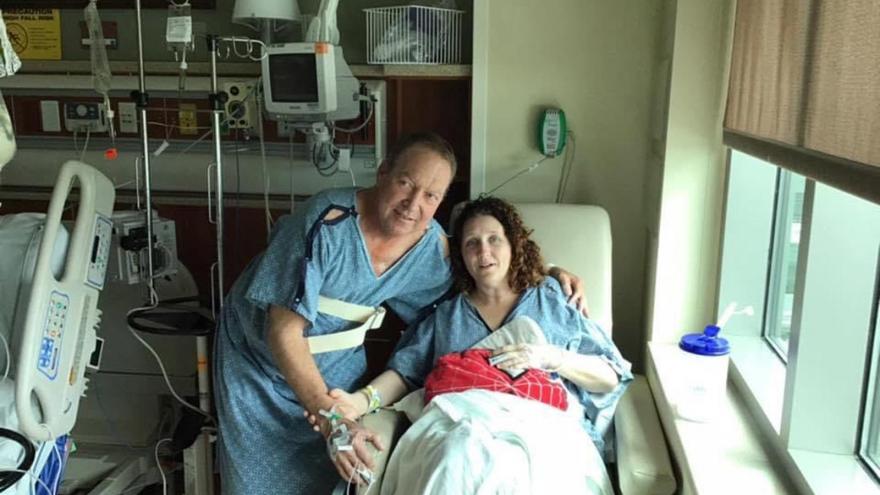 (CNN) -- When Terri Herrington's husband Bryan died 16 years ago, he saved the lives of four other people through organ donation. She befriended Jeffrey Granger, who received Bryan's kidney and pancreas. When that kidney failed last year, Terri immediately volunteered to donate her own kidney, which is now living on with Bryan's organs in Jeff.

Granger tells CNN that today, his life is great, and he is feeling "wonderful," despite the side effects of the steroids he's taking for his latest transplant. But in 2004, after living nearly three decades with insulin-dependent diabetes, his doctor delivered the news that he needed a transplant.

Those organs came from 35-year-old roofer Bryan Herrington who lost his life in a tragic fall from a house while on the job. Granger received Bryan's pancreas and kidney. Bryan donated his heart, lungs, and liver to others.

For the first year after the transplant, Granger was not allowed to know who made the lifesaving organ donation, and Terri was not allowed to know who received it. But during that first year, the two exchanged anonymous notes and holiday cards to each other. Later, Terri was able to send Granger a card introducing herself and telling Granger about Bryan. When they first spoke on the phone, Granger said it felt like the two had known each other their whole lives. Over the next 15 years, a tight friendship developed.

In 2019, the donated kidney started failing and Granger went back on dialysis. He reached out to Terri with the news. She had recently considered becoming a living donor and immediately decided that Granger was the person she wanted to have her kidney. She was so quick to offer to be his donor that Granger thought it was a joke.

When Granger posted on social media alerting his friends and family that he needed a new kidney, Terri responded by asking, "Did you think I was kidding?" When Granger admitted that he did not take her offer seriously, she said she was "serious as a new kidney!"

Not only were Bryan and Terri Herrington both matches for Granger, but so was Granger's wife, Pam. He says that he took Terri up on her offer so his wife could be his caregiver after the surgery. Today, Terri's kidney is sitting right next to the kidney donated by her late husband. Terri says, "we are back together."

Dr. Mark Johnson, who operated on Terri during the transplant at UF Health Shands Hospital, told CNN that Terri not only increased Granger's life expectancy but also improved his quality of life. He says Granger could expect this kidney to last another 10 to 14 years and that it's common for donated kidneys that failed to remain in transplant patients even after new ones are in place. He also said that he is not aware of another case of a husband and wife donating organs to the same person.

While Granger and Terri are now closer than ever, there is one issue where they can't seem to see eye-to-eye. Terri, who lives in Pensacola, is a diehard Florida Seminoles fan, and Granger pulls for the University of Florida Gators. Terri says that she hopes the kidney "will pump some Seminole blood and change him." Granger, who lives in Wacissa, Florida, simply said, "that ain't going to happen."

One thing they both agree on is the importance of organ donation.

Terri wants people to know that when you donate, you are not just helping one person, but you are helping their families, "I would do anything for more time with my husband." Granger is urging people to become organ donors because "You are saving someone else's life that is maybe meant to be lived and tell a story like mine."