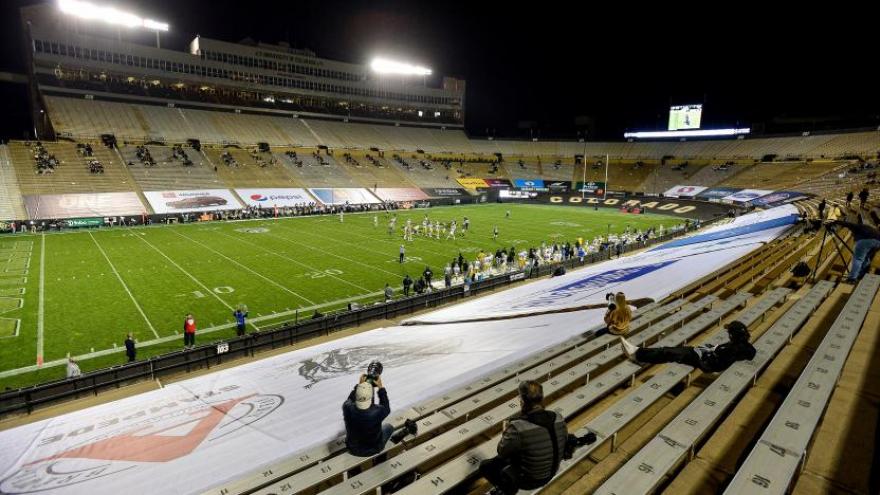 Twelve football games are getting canceled or postponed this week due to Covid-19 infections on teams.

(CNN) -- The college football schedule has been thrown into disarray, with 16 games canceled or postponed this week due to Covid-19 infections on teams.

It's the second straight week college football has lost double-digit games to its schedule. With cases surging around the country, fans should brace for the possibility of more canceled or postponed games.

The US reported 187,800 new Covid-19 cases on Thursday, and on Tuesday, there were 1,707 deaths, according to Johns Hopkins University. It was the third highest single day for new cases during the pandemic. There are now more than 11 million reported Covid-19 cases, and more than 250,000 Covid-related deaths, throughout the United States.

Louisiana-Lafayette announced on Wednesday that Saturday's home finale against Central Arkansas has been canceled due to positive Covid-19 tests and contact tracing.

The Louisiana Ragin' Cajuns did not hold practices on Tuesday. The team said it hopes to resume normal operations this Saturday.

"There has been an unfortunate uptick in coronavirus cases around the country, especially in football programs, and now more than ever, we must remain committed to being safe, following proper protocols and mitigating further spread of the virus," Billy Napier, head coach of the Ragin' Cajuns, said.

Louisiana-Lafayette's next game is scheduled for November 28 against Louisiana-Monroe.

The Mountain West Conference also announced on Wednesday that Utah State would not be able to play Wyoming on Thursday night due to Covid-19 cases within the Utah State program. The conference will not reschedule the game and has declared it a no contest. Utah State's next scheduled game is November 26 against New Mexico.

On Wednesday, the American Athletic Conference (AAC) announced that Saturday's games featuring Houston at Southern Methodist University (SMU) and Navy at University of South Florida (USF) have been postponed due to Covid-19.

"Our student-athletes are continuing to work hard with energy and enthusiasm and look forward to the opportunity to compete and get better each week," USF Vice President of Athletics Michael Kelly said in a statement on Wednesday.

"However, all our decisions start with the health and safety of our student-athletes as our first priority. And we reached a point this week where the decision was clear that it was in their best interest to postpone this week's game."

According to AAC officials, the conference will work with all four schools involved on potential dates to reschedule the games.

The full list of games affected so far this week: