15 years ago a woman found a photo of an unknown family in a used book. Through the power of Twitter, she's mailing it back to surviving members 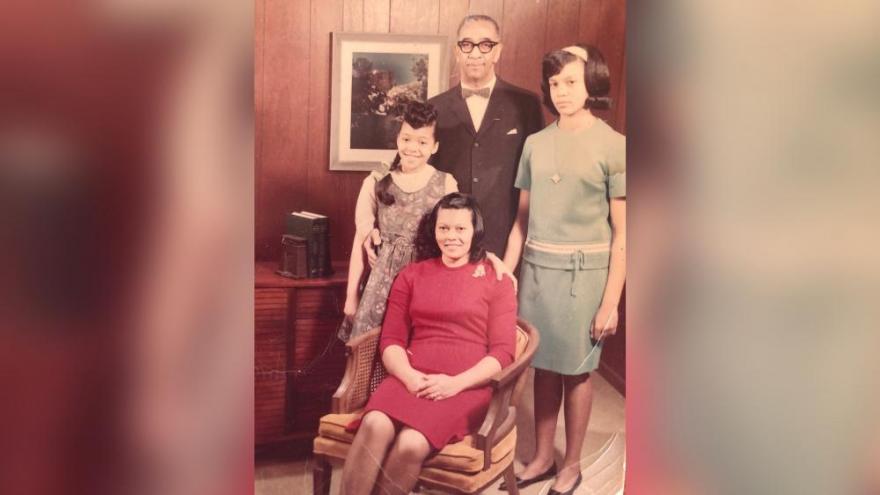 15 years ago a woman found a photo of an unknown family in a used book. Through the power of Twitter, she's mailing it back to surviving members.

(CNN) -- Every few years, a New York City woman took a moment to admire the family photo tucked away on her shelf -- but it wasn't a photo of her own family.

Victoria Johnson came across the decades-old photo 15 years ago in a book she bought at a used book store.

"I found this picture in whatever book it was and I was just so mesmerized by it," Johnson told CNN. "I just wanted to know who this family was."

The lost photo depicted a Black family from the 1960s -- a husband, his wife and their two daughters. As a historian and professor at Hunter College at CUNY, Johnson said she was drawn to it.

"I used to get the picture out every now and then, it was on my shelf, and I would just look at it. And just think about these people," Johnson said.

She often wondered about their experience as Americans and was curious if they were still around, she said.

"This was a black family and I'm white," said Johnson. "I know they lived different lives from me because this was a picture from probably the 1960s."

More than a decade later, with race and equality a major topic across the country following the rise of the Black Lives Matter movement, she found herself drawn to the photo once more.

"A lot of Americans have been thinking about race lately," she said. "My students help me think about that, my colleagues, the historians and activists I follow on Twitter. ... It was all kind of swirling around in my mind and then I saw the picture."

Hoping to share the photo with the family and give them back a piece of their lost history, she posted the picture to Twitter.

The tweet quickly gained traction with thousands of people from around the country joining in to help solve the mystery.

"It was like this huge joint national sleuthing project," said Johnson.

And within 48 hours, the niece of the man pictured in the photo reached out to Johnson on Twitter.

"I think my great uncle in this [picture] is the man in your tweet," she wrote in a post, along with a photo to confirm it.

Johnson said she couldn't believe how fast she was able to connect with the family.

"It was just such a whirlwind," she said "So many people seemed so happy to participate in something that might connect people."

The family told CNN the photo was taken of Sheldon, Margaret, Valerie and Sharon Sudduth at their home in Topeka, Kansas. The husband and wife are now deceased, but the girls currently live in Texas.

Now 65, Valerie Sudduth, the youngest daughter in the photo, couldn't believe her family's picture was found.

"I was excited to see the picture," said Sudduth, who was in elementary school when the photo was shot and has vivid memories of her new haircut.

She said her father worked at Santa Fe Railroad and was an entrepreneur, with a janitorial service for 47 years. Her mother worked as a nurse and later worked at the church. The family was heavily involved in the church and her father sang in a gospel quartet 50 years, Valerie Sudduth said.

"This picture is such a gift, it really is," said Elizabeth Rattray, a cousin to the family. "As a culture, we lose so much, we have lost so much. So any pieces that you can find and validate and verify it just it makes it that much richer."

Johnson plans to mail the photo to Valerie and her family and hopes to coordinate a call to learn more about the Sudduth family and their history.