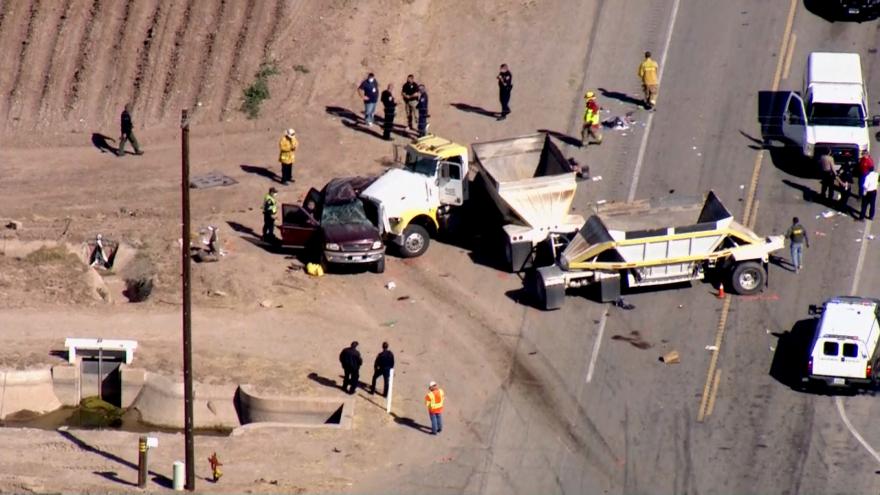 An SUV packed with people and a semitruck slammed into each other near the Mexican border on Tuesday morning.

(CNN) -- An SUV packed with people pulled out in front of a semitruck towing two trailers in a rural California county near the Mexican border on Tuesday morning, leaving at least a dozen dead and others hospitalized, officials said.

Overhead video in Imperial County showed the brutal aftermath of the crash, with the jack-knifed semitruck smashed into the left side of a Ford Expedition. Both came to a rest off the side of a rural road about 10 miles north of the border.

Hospital and police officials gave slightly different tallies of the injured and dead in the incident.

California Highway Patrol Border Division Chief Omar Watson said at a morning briefing there were 25 occupants in the Expedition during the crash and that 13 died, including the driver.

"It would be premature of me to speculate on what happened at this collision. The important thing is that 13 people died in this crash," he said at a second media update. "We owe it to the families of those that were killed and injured as well at the public to conduct a complete and thorough investigation."

A Ford Expedition typically can safely seat up to eight people. But this vehicle didn't have rear seats, Watson said.

"I don't know if they were cut out or removed, I'm not sure, but they were not in the vehicle," Watson said. "What it indicates is that there were not enough safety belts for the passengers."

At least 10 Mexican nationals were killed, the Mexican Consulate said in a statement.

Consulate officials said they were saddened by the news and are working to confirm the nationalities of the other three passengers who died. Mexican officials will provide assistance to the families affected by the crash, the statement said.

Watson said earlier it is unknown where all the people in the SUV are from. Some didn't have identification. The driver was from the Mexican city of Mexicali, he said.

"We are close to the border, so we have people who come back and forth daily for work," he said.

US authorities are working with the Mexican consulate to determine who was in the vehicle and to notify next of kin.

Special agents from the Homeland Security Investigations office in San Diego are investigating to see if human smuggling was involved, a US Immigration and Customs Enforcement spokeswoman told CNN in a statement.

Watson described a gruesome scene in which some occupants were ejected from the vehicle and died, while others were found dead within the SUV. He said 12 people died at the collision site and one person died at a hospital.

The passengers in the SUV ranged in age from 15 to 53, Watson said at a third news conference.

Judy Cruz, the managing director of the emergency room department at El Centro Regional Medical Center, earlier had said the vehicle had 28 occupants and that 15 had died.

"Patients are going through a difficult time as you can imagine," El Centro Regional Medical Center CEO Adolphe Edward said. "This was a major accident and we are taking care of them in the emergency room department."

Edward advised not to refer to those injured as "undocumented" and noted that a member of the Mexican consulate was present at a news conference alongside hospital officials.

The driver of the semitruck, who is 69, had moderate injuries. The trailers he was pulling were not loaded, Watson said.

Three of the four patients being treated at Desert Regional Medical Center were in the intensive care unit, hospital director of communications Todd Burke told CNN.

At least one of the injured passengers from the SUV has been released from the hospital, Watson said.